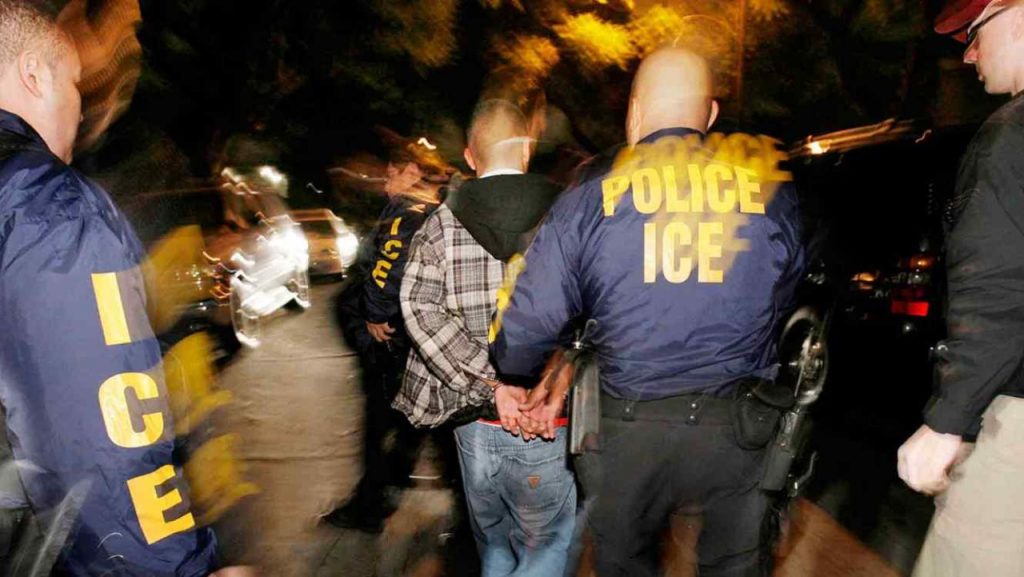 Image from Telemundo. Photo by AP.

Immigration and Customs Enforcement (ICE) carried out operation “Safe City” with the aim of arresting and deporting immigrants from 42 countries. In line with the propaganda and policy line of the current administration, the agency justified the criminalization of all immigrants with dubious claims that those targeted were “ex-convicts, gang members and undocumented repeat offenders.”

Activists of immigrant organizations have denounced this offensive as a direct threat, intended to sow fear among immigrants and to suppress the rage against White House immigration policies, a resistance that is being actively expressed in the streets. Just a few weeks ago, before the announcement of the DACA cancellation, thousands of migrants and activists took to the streets of major cities across the U.S. to defend the so-called “Dreamers.”

The rash of deportations are part of a series of actions that the current government is launching against the migrant movement in the United States, including exerting pressure on Sanctuary Cities, the threat of DACA cancellation, and an increase in the number of arrests and detentions.Now, Trump is threatening to enact new immigration policies that will affect young Central Americans.

Once in power, Trump said he would deport at least 3 million undocumented “traffickers” and “gang members” in the United States. According to some analysts, the president and immigration enforcement officers have had serious problems proving the presence of 3 million “delinquent” immigrants in the United States.

The “bad hombres” Trump referred to in past months- alleged criminals of Latino origin- are actually precarious workers who labor under dismal conditions with less protections than documented workers, pay taxes, and generate large profits for the national economy. Despite Trump’s characterization, the Latino population in the United States constitutes a very important portion of the labor force and is concentrated in industries such as construction, service, tourism, farming, and domestic work. This, added to widespread repudiation of Trump at a national level, has prevented the President’s plan for mass deportation in the millions, up until now.

But the threat of DACA’s cancellation, recent deportations, and the packed detention centers are generating alarm among the immigrant population.

Since Trump took office ICE deported 211,068 immigrants. And while the number of deportations has yet to surpass Obama´s record, immigration authorities themselves reported that arrests have risen 43 percent over the last year.

Although the government justifies the crackdown by saying that arrests are against people with a criminal record, the facts tell a different story. ICE reported that 28 thousand people with no criminal record were detained between January 22 and September 2.

According to official reports, there are almost 700 detention centers throughout the country. Under the Trump Administration, the population density within them has grown to intolerable levels. Most centers are managed by private companies. There are dozens of reports of mistreatment, poor nutrition, torture, sexual abuse, and forced labor. Prisoners may spend months or even years waiting for their case to be settled by a judge.

Trump Against the Youth

Apparently, the White House’s new inhabitant will not cease in his persecution of immigrants, particularly the youth.

The threat of DACA’s cancellation was a declaration of war against the Dreamers, but there is more. According to a new report from McClatchy DC, the White House is preparing a new policy to accelerate deportations of young Central Americans.

According to the same McClatchy DC report, the policy is oriented against “Central American teenagers who arrived at the southern border of the United States without the company of adults.”

This measure will authorize the government’s deportation of these young immigrants once they turn 18, which allows the immigration authorities to deport these young people without a trial.

According to official reports, over the last 5 years, 100,000 children of Central American origin have entered the United States. If this measure is approved, it will only deepen the humanitarian catastrophe afflicting the children and people of Central America. The children cross Mexico on their way to the US, running away from misery, violence of organized crime, and the armed forces in their respective countries.

Last week’s deportations are being interpreted as a warning threat for an onslaught of punishing anti-immigration policies. Andrés, a Mexican restaurant worker in California, said, “We are sure that Trump wants to prevent discontent against his racist politics from being expressed on the street. That’s why he’s punishing us, because in recent months we have mobilized throughout the country for labor rights, for dreamers and against anti-immigrant laws.”

After the president’s announcement to cancel DACA was widely repudiated, the Democratic Party leadership met with Trump to negotiate keeping DACA in exchange for a border security plan. The following day, Trump denied the agreement. So for the moment, the threat of more deportations, the cancellation of DACA, and new anti-immigrant laws persists.

Andrés stated, “We can’t trust the negotiations between the establishment politicians. We know that Democrats and Republicans are not our friends. We must take the way of mobilization and really fight Trump.”

He continued, “We are not alone. A lot of migrant organizations, some unions and even left organizations like the Democratic Socialists of America support us, but it’s not enough. We have to be thousands of souls. Nor is it enough to defend what we already have, like DACA. We want full rights for migrants and our children. I think we’re in a good position to all be organized to resist Trump. ”