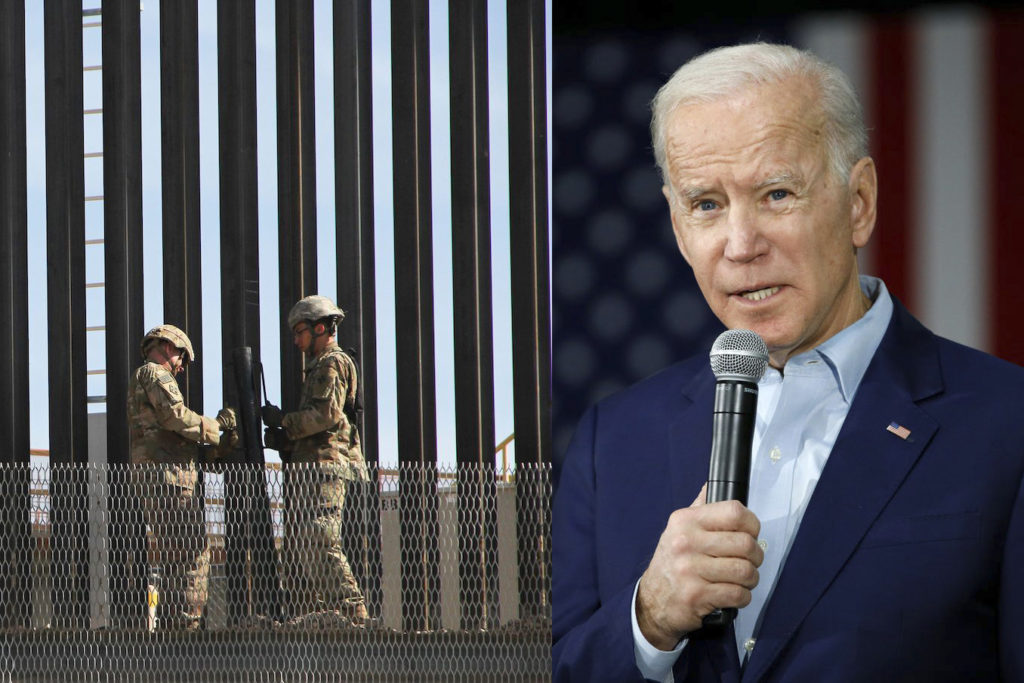 On August 5, Joe Biden held an interview with several members of the National Association of Black Journalists and the National Association of Hispanic Journalists. When NPR reporter Lourdes García-Navarro asked the Democratic presidential candidate, “Trump campaigned on ‘Build that wall!’ Are you willing to tear that wall down?” Biden stuttered, “No,” and then changed the question by answering, “There will not be another foot of wall constructed in my administration.” NPR headlined its report on his statement, “Biden would end border wall construction, but wouldn’t tear down Trump’s additions.”

While refusing to promise to remove any section of border barrier if he arrives in the White House, Biden insisted, “I’m going to make sure that we have border protection, but it’s going to be based on…high-tech capacity to deal with it. And at the ports of entry, that’s where all the bad stuff is.”

Biden is talking about using U.S. Customs and Border Patrol to carry out his “protection.” CBP is a militarized police force of over 60,000 personnel that killed 97 people between 2003 and 2018, with a pattern of shooting unarmed immigrants. In early 2019, it allowed seven child prisoners to die through denial of medical care.

When Biden says he is worried about ports of entry, that means more Border Patrol agents with more weapons and funding searching cars and trucks passing through checkpoints from Mexico to the U.S. If you were an immigrant from Mexico, Honduras, Haiti, or another Southern country, would that make you feel “protected?”

The methods of border control Biden proposes are anti-immigrant, racist, and brutal. First, the physical barriers. A fact-check by Politifact in May 2020 found that while Trump boasts he has constructed 182 miles of new border wall, this is misleading. There were already barriers on 654 miles of the two thousand mile border when Trump took office, and there are barriers today on 657 miles—three added miles. Almost all of Trump’s construction has replaced older and weaker fencing built under the Obama administration with taller and stronger “wall” made of heavy steel posts.

The other element of Trump’s construction is to expand “border wall systems.” In some places there are two or three layers of barriers. And CBP has built patrol roads with lights and cameras to hunt down immigrants. The agency has repeatedly initiated high speed chases that have killed innocent people.

What does it mean for Biden to go on record that he will not dismantle these barriers? The walls and fences cover only one third of the whole border. But they block the parts near urban areas where immigrants could cross more safely. The region is a desert climate. Since the mid-1990s, approximately ten thousand immigrants have died on the journey. Barriers at populated points and the presence of patrols force people to cross long distances through wilderness with no one to help if they become lost or stranded. Working class immigrants die of heat exhaustion because of the barriers that Joe Biden is accepting. Infamously, in 2017 Border Patrol agents were filmed in the desert dumping out gallon jugs of water left by the humanitarian aid group No More Deaths.

How did the border fencing already in place when Trump became president get there? The Austin American-Statesman reports, “[In] 2006, Bush signed the Secure Fence Act. President Barack Obama oversaw the fence’s construction. All told, Homeland Security [DHS] built 654 miles of fence…at a cost of $2.4 billion.” Most Democratic politicians would respond that a president must “follow existing law” even when it comes to building a deadly anti-immigrant fence. But immigrant lives matter more than unjust laws.

García-Navarro began her interview with Biden by noting that, “President Obama was known as the ‘Deporter In Chief,’ removing more than three million people.” But Biden made no response to this point. In the last year, he has made an opportunistic change in how he responds to Obama’s mass deportation record when he was vice president. Asked about those deportations in an early debate, Biden responded, “President Obama, I think, did a heck of a job.” Later, Biden assured voters that if elected he would, “prioritize deportations, only people who have committed a felony or serious crime,” which asks faith in the racist U.S. justice system and covers up deportations for petty crimes. He even insulted a Latino activist who criticized the three million deportations and demanded a full halt by retorting, “You should vote for Trump.”

Biden then changed his tune. This February he told Univision viewers of the Obama administration’s deportation policy, “I think it was a big mistake. Took too long to get it right.” The Washington Post reported, “In a private conversation…with some members of the Congressional Hispanic Caucus, the presumptive Democratic presidential nominee distanced himself from some of the Obama administration’s most controversial immigration policies, including its high number of deportations.” One of the politicians who held that closed-door meeting, California Democratic congressman Tony Cárdenas, publicly absolved Biden, announcing that the candidate told him mass deportations were, “the Obama administration’s decision, as a whole. He didn’t run point for that. And Joe Biden, on top of that, mentioned that under his presidency, we wouldn’t see the need nor would we see those numbers of deportations.” Its clear that Biden wants to play both sides: trying to position himself as the antidote to Trump’s xenophobic policies while at the same time, maintaining the racist and xenophobic wall built by the Obama administration and strengthened by Trump.

For his vice presidential candidate, Biden is widely expected to choose either former top U.S. diplomat Susan Rice or former California attorney general Kamala Harris. Whereas Rice once called a Palestinian UN appeal for statehood an act of hostility toward Israel, which constructed a 25-foot apartheid border wall around the West Bank, Harris led the racist criminal justice system of California and proudly posed in 2011, long before Trump’s time, for a publicity photo wearing a POLICE jacket, smiling with a squad of CBP agents, in front of a wall on the U.S.-Mexico border.

There is no reason to believe that the “high tech capacity” border enforcement Biden put forward as his alternative to further wall building is in any way pro-immigrant. CBP itself has been asking for special technology such as truck mountable 40-foot tall surveillance camera towers with night vision to track and capture people. CBP has even announced a plan to build ten 160-foot tall permanent surveillance towers that can each watch all activity in a seven mile radius on the reservation land of the Tohono O’odham indigenous people in southern Arizona. CBP employs electronic motion sensors and tracks drivers in the border zone. The Tohono O’odham tribal government voted to accept the demand by the CBP but may have done so more out of fear of the displeasure of the U.S. state than because tribe members want to help arrest immigrants or live under permanent surveillance. CBP also has a large number of aerial drones, including Predators, and the agency admitted it loaned a surveillance drone to the state police who repressed the Standing Rock Sioux resistance to the building of the Dakota Access Pipeline on their land.

To be absolutely frank, the Democratic Party’s candidate “Smiling Joe” is trying to project a friendly image, but his attempted promises to respect the dignity of immigrant workers are full of cracks and fall apart almost immediately. A politician who supports the things Biden has supported and supports today cannot fight Trump because he doesn’t believe at all in immigrants’ right of movement and he isn’t for Black and Brown workers but for U.S. big business.

Biden won’t promise to remove Trump’s wall or Obama’s fence, and he prefers to explain of his policy on deportations tokenistically behind closed doors to Democratic Party Latino congresspeople instead of to the public for the same reasons why during a mass Black Lives Matter uprising he suggests teaching cops to shoot suspects in the leg instead of the heart and fiercely opposes defunding the police. Efforts to break down oppression and build a principled and effective Left in the United States cannot use—or play by the rules of—this type of party.