Trump Starts a New Fire in the Middle East

Donald Trump has done it again. As if military escalation with North Korea and his anti-Muslim tweets were not enough, he just created yet another conflict with international implications. 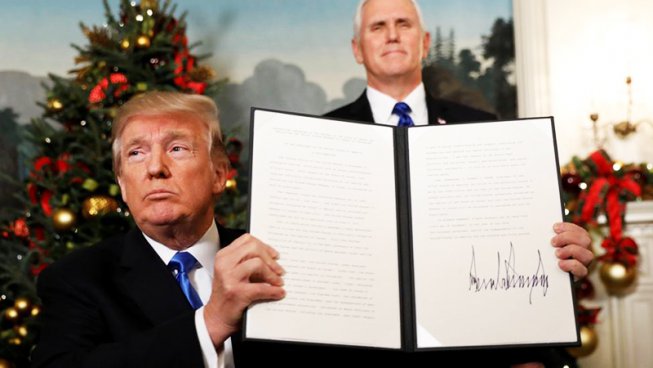 On Dec 6, from the Diplomatic Reception Room, Donald Trump formally announced that the United States would recognize Jerusalem as the capital of the state of Israel, raising near universal criticism among world leaders with the obvious exception of Benjamin Netanyahu, the far-right Israeli Prime Minister. This polarizing strategy is likely to have incendiary side effects in the Middle East and major repercussions in the West as well.

As with many foreign policy questions, the key players in Trump’s White House are not in agreement on this decision. While Vice President Mike Pence supports the move to Israel, Secretary of Defense Jim Mattis and Secretary of State Rex Tillerson consider it a risky move and have shown concern that the costs may outweigh the benefits.

The announcement signals Trump’s abandonment of a policy the U.S. has maintained for the past 70 years with regard to Israel. The U.S., like the other 86 countries who maintain diplomatic representation in Israel, has kept its embassy located in Tel Aviv in recognition of the disputed character of Jerusalem. Although Washington accepts the colonial occupation of the Arab section of Jerusalem — which originated in 1967 and has increased by about 200,000 settlers since then — the U.S. has never before taken such a firm position on the status of the holy city.

In his brief speech, Trump said, “Jerusalem is the seat of the modern Israeli government. It is the home of the Israeli Parliament, the Knesset, as well as the Israeli Supreme Court,” and that a mere formality had prevented the U.S. from having its embassy in Jerusalem. “Today we finally acknowledge the obvious. That Jerusalem is Israel’s capital. This is nothing more or less than a recognition of reality.”

Trump included a reminder that, in 1995, Congress adopted the Jerusalem Embassy Act which ordered the relocation of the embassy to Jerusalem, recognizing the city as an “undivided” capital but including a waiver that allowed the acting president to postpone the relocation. Since then, every president has utilized the waiver, including Trump himself in June of this year.

In rejecting the waiver, Trump signals a break with a long-maintained presidential practice and issues a stark reminder of the U.S.’ unwavering strategic alliance with the Zionist state.

There are several hypotheses that address the political motivations behind this move, none of them mutually exclusive.

One theory points to domestic policy as the cause of this decision. It was the first reason Trump cited in his speech, saying, “while previous presidents have made this a major campaign promise, they failed to deliver. Today, I am delivering. I’ve judged this course of action to be in the best interests of the United States of America.” It is a politically opportune moment for Trump to play to his base and demonstrate that he can fulfill his campaign promises.

Even though the economy and the stock market are on the president’s side, Trump’s approval ratings are at a meager 32 percent. This is partially because, after almost a year in office, Trump has almost nothing to show to his base. With the exception of the tax reform bill that is likely to pass soon, all the president’s proposals have failed in Congress. Many have even failed to win the support of all GOP senators and representatives, as was the case with the humiliating defeat of his plan to repeal and replace Obamacare.

Meanwhile, the White House is embroiled in the “Russiagate” crisis with seemingly no end in sight. The investigation took yet another step closer to Trump when former presidential adviser Michael Flynn admitted that he made unofficial contact with Russian diplomats and announced his willingness to collaborate with the FBI in the investigation.

The transfer of the U.S. Embassy to Jerusalem is a very popular move among the staunchest members of Trump’s base: the pro-Israel hawks and the Christian Right.

The second hypothesis is that Trump is seeking a strategic shift in U.S. policy in the Middle East. The Obama-era policy was to lessen tensions with Iran — a political plan that culminated in a nuclear deal endorsed not only by Iran, but also by France, England, and Russia. Trump, on the other hand, is taking a highly aggressive course with Iran, calling into question the nuclear agreement and attempting to form an alliance with the Sunni Muslims against the Iranian regime. This would exacerbate the intra-Islamic confrontation between Sunnis and Shia and would risk turning the war of words between Saudi Arabia and Iran into an actual war.

In the case of Iran, the tactic used by Trump is one that has characterized his administration — half-measures. In early October, Trump announced that he would not re-validate the nuclear deal with Iran nor would he break with it entirely. Diplomacy is largely composed of symbolic messages which often have very real consequences. The approach toward Iran is a high-risk one, particularly as the civil war in Syria nears an end and Iran and Russia stand to be the winners. Russia and Iran succeeded in keeping Assad in power and effectively ending military opposition to the regime.

The recent Lebanese crisis as a result of Prime Minister Saad Hariri’s resignation destabilized the political situation that had been negotiated since the end of the Israeli-Hezbollah war in 2006 (he has since suspended the resignation), revealing the delicate balances of power that exist in the region. The Saudi monarchy, in its power struggle with Iran, only had to force a resignation announcement out of Hariri in order to throw the country into crisis.

Trump’s turn away from Obama’s foreign policy is generating instability that could easily spiral out of control. Obama’s nuclear agreement with Iran will likely crumble before our eyes. On top of refusing to renew the deal, Trump is strengthening Israel’s position, one of Iran’s main rivals for regional control, and creating alliances with countries run by Sunni hegemony in an effort to isolate Iran, in cooperation with allies like Saudi Arabia. The U.S. also seeks to strengthen its imperialist enclave in Israel and to defeat Palestine in an attempt to prevent the Arab masses from intervening, independently of their bourgeois leaderships, in disputes between U.S. imperialism and regional regimes.

A third possibility exists within the framework of a changing Middle East, characterized not only by a change in U.S. strategy but also by changes in the policies of Saudi Arabia that took place when Crown Prince Mohammad bin Salman took the reins. The country’s traditional foreign policy has been a defense of the Palestinian national cause in an effort to hide its alliance with the United States and its tolerance of Israeli colonialism. However this has begun to change.

It is a well-known fact that Jared Kushner has been negotiating a new “peace plan” for the Israeli-Palestinian conflict for almost a year with U.S.-friendly Middle Eastern leaders. Kushner found a great ally in Saudi Prince Salman, who is also willing to break with the traditional Saudi stance on the issue of Palestine. According to some reporters, Prince Salman shared the outline of this new plan with Mahmud Abbas, the head of the Palestinian National Authority. Reports say that this plan would be the more favorable to Israel than past Saudi-supported deals. It would eradicate any semblance of Palestinian national self-determination, and consecrating its status as an apartheid state.

Will Trump’s decision unleash a new intifada? There is no way to tell for certain, but it is clear that this action has the potential to do so.

In Trump’s imperialist logic, validating the colonial occupation of the state of Israel and its exclusively Jewish character, symbolized by the recognition of Jerusalem as its capital, represents a significant push towards the Israel-friendly “two-state solution.” Trump’s speech was the first time he has shown support for the two-state model.

The two-state solution has been the imperialist program for decades. There is no indication that Trump will be any more able than his predecessors to make the proposal materialize.
At the very least, the ostensible “peace process” would give political cover to the incipient anti-Iranian front in which both Israel and Saudi Arabia are active.

The reality is that Trump’s policy carries heavy risks of further inflaming the region. That is why even U.S. allies in the West and the Middle East and even sectors of the Zionist establishment are against Trump’s move. Already people have organized protests against Trump’s decision around the world. In New York, hundreds gathered in Times Square. In Jakarta, the capital of Indonesia, 10,000 people protested, and in Lebanon, Palestinians were repressed by the police in front of the U.S. Embassy. There were also protests in Turkey and Jordan.

Trump’s arsonist-style strategy in the Middle East will have severe repercussions for Palestinians, oppressed people in the region, and even Muslims and Arabs in the U.S., who will face increased racism and xenophobia. But we can be sure his plans will be met with fierce resistance, once again, by the courageous Palestinian people.