Two Different Paths: Syriza and Podemos or the FIT?

Last Sunday’s primary elections in Argentina closed with great celebrations. Running under a revolutionary working-class program, the Left and Workers’ Front (FIT) presented two separate slates for the first time since its formation in 2011. The FIT’s election results offer important considerations for the international left. 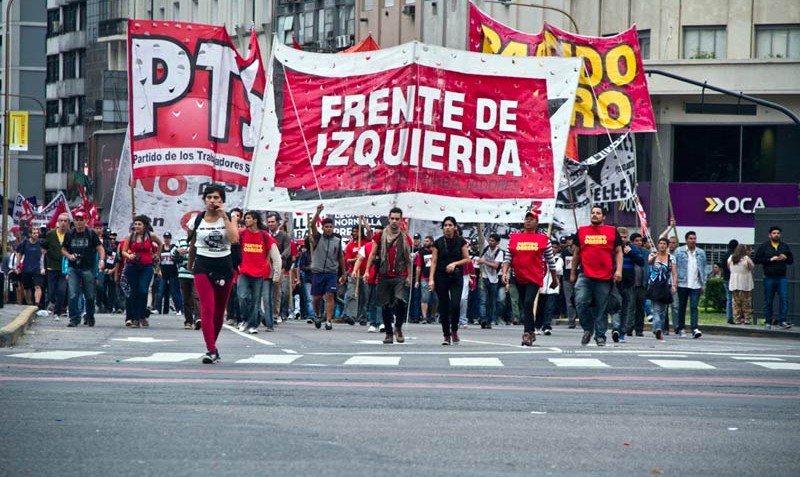 What Is the Left and Workers’ Front?

The Left and Workers’ Front (FIT) is a coalition made up of various political groups whose main forces are the Party of Socialist Workers (PTS) and the Workers’ Party (PO), parties politically independent of the bourgeois parties.

In the last few years, they gained international attention for gaining electoral ground, which is quite uncommon for a class-conscious alternative that, in addition, has a presence and service.

Particularly through the influence of the PTS, the heart of the FIT lies in the formation of a new workers’ militancy, through participation in key workers’ struggles; for example, supporting the “indomitable Lear workers” in their fight against massive layoffs of the multinational auto parts company.

It’s interesting that in Mexico, the left, the intellectuals, and progressive sectors make so many references to the projects like Syriza and Podemos despite the crisis caused by the betrayal of Tsipras’ government that acted counter to the popular vote against the negotiations with the Troika – and not a single reference to the FIT.

The FIT demonstrates that it’s possible to strengthen and electorally put forth an independent alternative that represents the sentiment of sectors of the working class without watering down the political program and socialist ideas while taking part and playing a strong role in the class struggle.

And in the Izquierda Diario we debated with intellectuals like John Ackerman, Paco Ignacio Taibo II and Octavio Rodríquez Araujo because of their “conformist optimism” about the emergence of the National Regeneration Movement (Movimiento Regeneración Nacional, MORENA); in synthesis, says that “there is no other option possible” for the working class sectors other than to vote for Morena and that the socialists are “utopian”.

Maybe the lack of any kind of reference to the FIT isn’t due to a lack of knowing that they exist but because it puts to question the hypothesis that Morena party is the only “natural” political representation of the “social movements” and that no other path is possible.

What Is the PASO, and Why Is the FIT Taking Part?

The PASO is a primary runoff for the parties running in the October elections for political positions including president and vice-president. The PASO is where the representative of each party is decided through elections. In reality, the PASO was created as a tool to keep the left out since the parties are required to receive a minimum of 1.5% of the votes in order to participate in the general elections. It’s also a way to strengthen the way the State intervenes in the internal life of the other political parties.

For the first time since the FIT was established in 2011, they’re presenting two slates in the PASO. One list is made up of the PTS and Socialist Convergence and the other list is made up of the PO (Partido Obrero) and the IS (Izquierda Socialista). The FIT’s competing slates emerged as a result of disagreement within the front was discussing presenting a unified list of candidates (months earlier the PTS had put forward that Nicolás del Caño run as president on the list whereas the PO opted for Jorge Altamira), the PO and IS announced that they were creating a unified list for president and vice-president, indicating their intentions to participate in the PASO with a separate list than the PTS. The PTS proposed a unified list to run Jorge Altamira as president and Nicolás del Caño as vice-president; however, the PO rejected the offer.

Nicolás del Caño is a young contracted worker and student who surprised everyone by taking the second place in the mayoral elections in Mendoza and beating the Peronist party candidate by ten percentage points. He has turned into a phenomenon well known by the student movement, youth, and precarious workers.

Del Caño gained visibility during his parliamentary post by earning as much as a teacher and donating the rest of his earnings to workers’ struggles. He also participated in the working class struggles in the last few years and confronted the repression that took place in the streets alongside the “unbreakable Lear workers” last year. This is why the PTS proposed Nicolás del Caño as president to politically express the new aspects of FIT’s rise in popularity.

What’s New in the FIT?

The FIT goes hand-in-hand with the emergence of workers’ militancy that has awakened in Argentina. In the slates led by Nicolás Del Caño and Myriam Bregman, thousands of workers are represented. Workers who during the past few years have put forth a strong fight against the bosses, the bureaucrats, and the government, and today have stepped out of the factories in order to take part in the political process as real representatives of the working class. There are 1,800 candidates running for a variety of legislative positions who have taken up the task of not only fighting for the demands of the working class, but also to fight for an independent and socialist alternative as political representatives of the oppressed.

This group of workers, some of them PTS militants but many of them independent workers, is building a new militant activism in their neighborhoods, alongside their neighbors, coworkers, and families.

The slate led by Del Caño and Bregman includes worker-candidates who confronted auto parts multinational corporation Lear during massive layoffs. The list also includes workers from the factory now known as Madygraf, who took the plant over and put it under workers’ control when the bosses abandoned the factory. There are also workers from the much celebrated Zanon factory, sanitation workers such as Alejandro Vilca, food factory workers, subway workers like Claudio Dellacarbonara, professors, and contracted workers.

At the same time the slate “Renew and strengthen the front” has put forward the important role of women in revolutionary politics, which is why 60 % of their candidates are women – and 70% of the candidates in the Buenos Aires are women. They’re struggling for abortion rights and an end to violence against women, femicide, and human trafficking.

The FIT experience merits the attention of the international left. It’s a practical demonstration of how independent workers’ politics does not have to be only left to the margins of the bourgeois political parties (whether they are neoliberal parties or anti-neoliberal). Moreover, it’s a vaccine against the skepticism of those who think that the working class is incapable of building an independent alternative that belongs to them.

The combination of a political practice that brings the socialist program to broad sectors of the mass movement so that our ideas and militants become popular and fuse with the aspirations of the masses, as well as the diffusion of socialist ideas on a massive scale (as we are doing through the “La Izquierda Diario” network throughout Latin America and now with the “Left Voice” in English and “Revolution Permanente” in French), with the organic involvement in the core of the working class together with our intervention in the class struggle, is showing its potential.

In Mexico we should learn from this experience, since in the political and electoral ground the MORENA party is trying to capitalize on the crisis and the regime’s parties loss of credibility of the parties of the Regime with an “anti-neoliberal” program similar to Syriza and Podemos.

It is very important that the socialist left, the workers who have been part of important struggles in the past few years against the bosses, the bureaucracy and politicians, the young “outsourced” workers and students that took over the streets in solidarity with Ayotzinapa Ayotzinapa to protest the corrupt, repressive “political class” and their alliance with the “narcos,” the women who fight against femicides, and the movement that fights for LGBT rights.

In order to make it really possible for different sectors to fight for an alternative, independent of the bosses’ parties, that has a workers and youth perspective, and that the left is not only a passive voice, it is fundamental that the left join the youth and workers vanguard, building strongholds of political influence in real working class sectors willing to struggle for their rights and aspirations, as they embrace the socialist perspective.

Against the skeptics that are calling to vote for MORENA because it is what “is possible”, we need to build in Mexico a political alternative of the workers and the youth, that should prepare itself to intervene with their own voice in the future battles in the class struggle, and that they don’t concede the electoral struggle to different variations within the regime or any “anti-neoliberal” alternatives.