For the second time in as many semesters, UCSC graduate employees have defied union bureaucrats, staging wildcat actions to fight for the demands that their union won’t. Such radical actions have the potential to inspire other struggles across the university system. 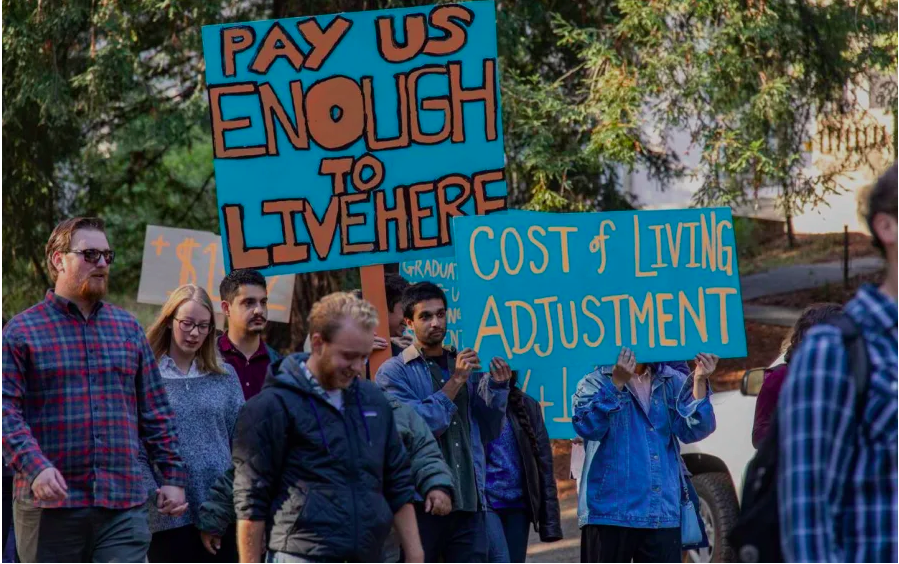 Graduate employees at the University of California Santa Cruz (UCSC) are at it again. Last semester, teaching assistants and other graduate workers on the campus organized large rallies and demonstrations in support of a cost of living adjustment. These demonstrations culminated in a wildcat action in which final grades for more than 12,000 students have been withheld. This action was in defiance not only of the UCSC administration but also the leadership of the UAW local 2865 which represents graduate employees across the university.

Despite this impressive and unprecedented wildcat action, the administration has continued to play hard ball, threatening to fire graduate employees and refusing to meet with them to discuss their demands. In response, organizers independently polled their fellow workers and on January 28 held a general meeting of the membership to get a sense of their willingness to strike. According to organizers more than 60 percent agreed that the time is now.  And as of 7:30 am yesterday morning, February 10, an indefinite strike of UCSC graduate employees began.

According to organizers: “grad students will be canceling regular teaching, grading, office hours, and research until UC administrators meet our demand for a monthly increase of $1,412.” As of 8:00 am, the official UCSC news page was reporting there were sizable pickets at the main entrance and west entrances of the campus. Interestingly, there are also reports that public bus drivers are standing in solidarity with the strikers and are refusing to cross the picket lines, dropping passengers off outside the university rather than completing their routes inside.

Graduate Employees are striking in large part for what they call a cost of living adjustment, or COLA, largely to cover the exorbitant rents most UCSC graduate employees are forced to pay to live in the city. The city of Santa Cruz has a small stock of housing and some of the most outrageous rents in the country, with apartment shares averaging upwards of $2,000 a month for a room. They argue that a monthly increase of $1,420 in wages would cover the difference in housing costs between Santa Cruz and other UC system campuses, such as Riverside, where housing costs are much lower but graduate employees earn the same wages.

However, as organizing has progressed from a grading strike of teaching assistants to a full blown work stoppage of what could be a significant portion of graduate employees, the action has the potential to grow into a wider struggle. In a strike declaration published February 10 in The Nation magazine, organizers stated:

“When we are met with the familiar insistence that there is ‘no money’ available to relieve our rent burden, to eliminate tuition fees, or to provide free housing, we know that it’s a question of priorities. Napolitano made this clear when she tucked away $175 million from public scrutiny.”

In other words, there is money for a graduate employee COLA and much more.

The independent nature of the strikes, the fact that they have the support of faculty as well as undergraduate students, and—importantly, the fact that these demands are spreading to other campuses which are standing in solidarity with UCSC—suggests that there is an opening for a much more ambitious and transformative movement. As anyone in higher education organizing can attest the key to winning any significant demands for workers or for students, requires a movement capable of indefinitely shutting down campuses and threatening business as usual, and that is exactly what this strike points to.

In such a situation, the graduate employees of UCSC could be leaders in a struggle not only for themselves but for the entire campus, the university, and even higher education more broadly. As one of the biggest institutions in the city, they are also uniquely positioned to link up their struggle to afford housing with the broader Santa Cruz community, building tenants’ rights organizations and fighting for rent control and high quality affordable public housing for all. These employees have already built what are in effect independent committees of workers. One of the next steps would be to continue to consolidate those committees while also helping to build radical independent student unions—such and those that led the student strikes in Quebec in 2012—that can represent graduate and undergraduate interests across the college and the university.

Though they are seeking a better and fairer wage for themselves, the graduate employees at UCSC are radicalizing their entire campus and have demonstrated that there is power in workers’ unity. Whether the administration meets their demands or not, this is a moment that can and should be continued as part of a larger ongoing transformation of the university.