Macri’s conservative government won a crucial vote in the Senate to lock Argentina into paying billions to the “vulture funds” – predatory hedge funds that acquire public debt through defaulting nations for a fraction of the true value and engaging in legal action to enforce full payment. 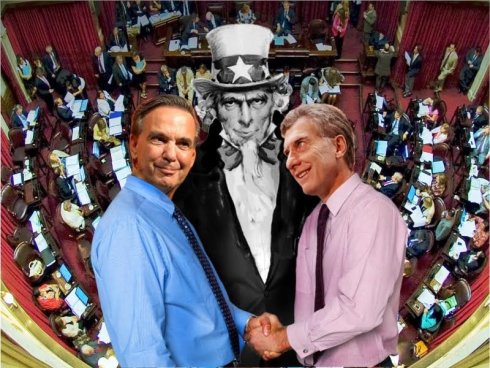 Macrismo would have lost this effort if not for the support of more than twenty senators of the Victory Front (Frente para la Victoria – FpV, Peronist alliance of former President Cristina Fernández de Kirchner). Forces of the Left have opposed this surrender in both the National Congress and on the streets. Recent events have proven their call for a blank vote during last year’s presidential run-offs to be correct.

The vote that took place in the early hours of Thursday, March 31 has paved the way for an enormous national surrender. In the Senate, where the Victory Front (FpV) holds a majority, more than 20 legislators from this political alliance voted in favour of handing over Argentina’s sovereignty to the vulture funds. As with a Kirchnerist slogan from a few years ago, “in life you must choose” – and when faced with the choice between Argentina and the vultures, most FpV Senators chose the vultures without a moment’s hesitation.

As a consequence, these political forces have given Mauricio Macri the vital political backing he needs to continue his economic plan of austerity and attacks on living conditions.

This choice has led them to vote alongside government senators from Cambiemos (Let’s Change, center-right coalition led by President Mauricio Macri), dissident Peronist and former President Carlos Menem, center-left forces such as Una Nacion Avanzada (UNA) and the Generación para un Encuentro Nacional (GEN) and the Neuquén People’s Movement (MPN). A veritable “Victory Front” has been assembled…around the vultures in a vote for this surrender by 54 votes to 16 against, easily surpassing the 37 votes needed for the approval of the accord.

As a consequence, these political forces have given Mauricio Macri the vital political backing he needs to continue his economic austerity program and attacks on workers’ living conditions.

It was not by chance that on the evening of March 30, President Macri told Channel TN that he was “very pleased” with his first few months in government: “I feel that the first results are starting to be seen, and that there is now enormous hope in Argentina.”

What we are seeing is a massive surrender of the nation to the world’s biggest usurers.

There should be no uncertainty around what has taken place. If the Victory Front, with its Senate majority, had cast a “no” vote, the deal with the holdout vulture funds would have fallen apart. Instead, what we are seeing is a massive surrender of the nation to the world’s biggest usurers. The costs incurred will fall onto the backs of workers, their children, jobs, education, health and general living conditions.

During the debate over the debt that took place, Myriam Bregman, MP for the Left and Workers’ Front, stated, “Let us put in place an example where the debt is not to the benefit of the big businesses and the big banks and does not end up becoming a tremendous burden on the country.” Memories of the economic turmoil caused by the crises of 1990 and 2001 are still very present in the public.

Myriam Bregman: “The government decided that the workers should pay for the crisis”

On March 31, the National Congress was transformed into New York Judge Thomas Griesa’s notary office. Griesa earlier ruled on the side of the vulture funds. The Argentine Senate’s affirmative vote opens the doors for the vulture funds to reap profits of over 1000%. The money needed to pay off the holdouts (more than $12 billion) will require the issuing of bonds of five, ten and thirty year lengths at an elevated rate of over 7%.

With the job that was requested of the vultures now done, the Argentine national government now waits to see what will come of the April 13 U.S. Court of Appeals hearing in New York, with the hopes that no further obstacles arise in the way of this national handover.

While Cambiemos listened from the beginning to the arguments for the need to make a deal with the vultures, return to the international financial market and thus “normalize” the national economy, from the Frente para la Victoria there were justifications and excuses.

Before the vote, FpV Senate leader Miguel Angel Pichetto suggested that he would vote in favor of the agreement, and that this should be no surprise, since Kirchner had already paid “the Paris Club, the YPF, the ICSID [International Centre for Settlement of Investment Disputes, linked to the World Bank], the whole world.” He also argued that former Peronist President Néstor Kirchner would have done the same thing.

It is worth noting that for many years, Pichetto was the main Kirchnerist attack dog in the Senate. However, during this historic Senate session, Pichetto and the right-wing Kirchnerist renegade Julio Cobos voted in unison.

In the declarations from the FpV Senate leader, there is much truth, even if other Kirchnerist voices did speak out in opposition. While FpV Presidential candidate Daniel Scioli denounced the Left & Workers’ Front during last year’s elections, he shared Mauricio Macri’s basic plan of economic austerity and further indebtedness.

As Scioli’s Economic Adviser Miguel Bein has tirelessly repeated, Juan Manuel Urtubey travelled at the request of Scioli to New York during the election campaign to round out a deal with the holdout funds. Omar Perotti from Santa Fe, in justifying his vote in favor of the agreement, mentioned this precise point during the Senate sitting, saying, “I approached Scioli and his economic team with the suggestion of bringing Argentina’s default to an end.”

For their part, the Peronist governors (many of whom pushed their Senators to vote in favor of the vultures in the hope of obtaining funds for their districts) have implemented austerity plans in their provinces that parallel the policies Cambiemos has implemented nationally – with layoffs and caps on wage increases. This is the case with Alicia Kirchner, elder sister of former President Néstor Kirchner in Santa Cruz.

In the lead-up to the closing of the lists for the election of various power brokers in the Partido Justicialista (Justicialist Party, largest component of the Peronist movement), these differences in the vote within the Frente para la Victoria constitute no more than a division of labor where nobody “takes their feet off the plate”: it bends, but does not break. They fail to think about how to confront the austerity and the surrender that workers and people are now suffering, focusing instead on the elections coming up in 2017 and 2019.

The Left & Workers’ Front was the only force in National Congress that rejected the illegitimate external debt.

In fact, not one of the FpV legislators who criticized the agreement called for any serious mobilization to reject the agreement or for a referendum. In the Chamber of Deputies, Máximo Kirchner (son of Néstor and Cristina and founder of the left Peronist youth movement La Cámpora) did not reject the surrender, but instead meekly suggested that the government “go and negotiates better, for we cannot be in such a predicament and give in so easily to extortion.” After all, as Cristina Fernández said, Kirchnerist governments were “serial payers of the external debt.”

During the marathon Senate session, the minority of the FpV that voted against used similar arguments. Anabel Fernández Sagasti asked for a new round of negotiations with the default bondholders: “Negotiate with our sovereignty in mind and take care of the interests of Argentina.”

The Left & Workers’ Front was the only force in National Congress that rejected the illegitimate external debt.

The Blank Vote: Correct Move by the Left & Workers’ Front

The Congressional vote in favor of the vulture funds shows that the Left & Workers’ Front was correct to call for a blank vote during last year’s run-off presidential elections between Scioli and Macri. The FIT continues to be the only force in Congress that has rejected the selling off of national sovereignty and the only one to call for the masses to mobilize in the streets to confront it.

“Protest for education, not for vulture funds. Carlos Fuentealba, presente!”

As former presidential candidate for the FIT Nicolás del Caño put it, “If anyone still has any doubt, the Left was correct in calling for a blank vote during the ballot [between Maurico Macri of Cambiemos and Daniel Scioli of the Victory Front], as there are no substantial differences between one and the other.”

At the same time, Del Caño emphasized, “We are seeing unity among those at the top for this surrender and for Macri’s austerity plan, which he is applying in the face of working-class and popular discontent – as shown in the massive demonstrations on March 24 [in commemoration of the military coup in 1976], the struggles of teachers in Santiago del Estero, Mendoza and Tierra del Fuego and of the [public sector] workers in Buenos Aires capital. The majority of trade union leaders have looked the other way, when what is necessary is a plan of action to move toward an active national strike against austerity, the surrender to vultures, and layoffs.”

The first one hundred days of the Macri government has implemented a good part of the plan ordered by big business: currency devaluation, rising stocks, negotiation favouring the vulture funds, “tarifazos” (large price hikes), public sector layoffs, and closer relations with Barack Obama and other imperialist leaders. But this is only beginning.

For the month of April, harsh increases in gas, water, public transport and gasoline prices have already been announced. In addition, a new round of layoffs in the public sector will commence, now that thousands of contracts expired on March 31.

While waiting for the much-delayed and uncertain foreign capital investments, Macri seeks to lower inflation with a regressive, anti-people plan to cool the economy. These moves will eventually go up against the limits of the level of austerity workers are willing to accept.

For their part, the various union leaderships maintain a truce with the ruling government, solely exploring deals in Congress for modest wage rises. The Victory Front, distant from any genuine resistance, watches while “piquetero” (social movement) leader Milagro Sala languishes in prison, failing to advance any serious campaign for her release. Meanwhile, many FpV Senators voted in favor of the vultures and their union leaders fail to put forward any genuine plan of struggle.

The Left & Workers’ Front puts forward the necessity for a national active strike against austerity, the surrender to the “vultures” and the ongoing sackings and dismissals, along with the need to build a working-class political alternative to the parties of austerity and impunity.