Victory in the fight for $15 in New York

An advisory board has recommended that New York State raise the minimum wage to $15 an hour for fast-food workers. The national movement for $15 has recently won important fights in some cities and gained nationwide momentum. However there remain some important unresolved questions about the potential of this movement. 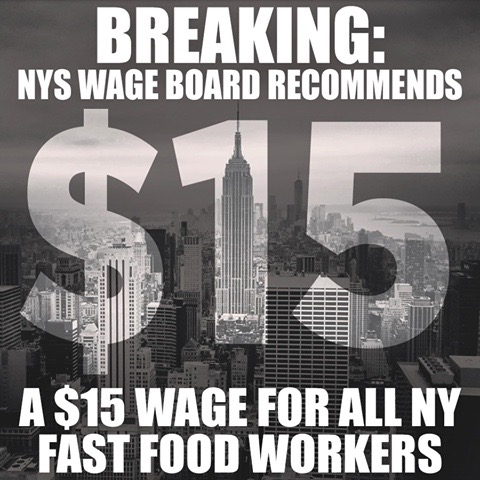 An advisory panel appointed by Gov. Andrew Cuomo has expressed support for raising the minimum wage for fast-food workers to $15/hour. The board, composed of Buffalo Mayor Byron Brown, SEIU Secretary-Treasurer Mike Fishman and tech-entrepreneur Kevin Ryan, announced its decision on Wednesday July 22. The state Labor Commissioner is expected to accept this recommendation and issue an official regulation.

The wage hike will not be effective immediately. The board proposes a 3 year phase-in period for the city of New York which will reach $15 by the end of 2018. In the rest of New York State the minimum wage would reach $15 on July 1, 2021.

The wage increase represents a huge victory for fast-food workers, only 3 years after the first fast food workers’ went on strike in New York. After the first walk out actions have spread across the country and turned the fight for $15 into a national movement; one which has built enough pressure to force some democrats to embrace the proposed wage hike.

However, this latest concession in New York leaves out a huge section of the low wage workforce: workers at restaurants, retailers, home care givers and many others. According to James Parrott of the Fiscal Policy Institute: 50,000 NYC workers will benefit from the wage increase but about 1.25 million outside the fast-food industry will still earn less than $15.

Even more important is the huge wage gap suffered by undocumented immigrant workers who typically make less than half the current minimum wage. No measure was proposed to address their problems.

Nevertheless, fast-food workers alone make up 180,000 workers in New York State. The wage increase represents a 70% raise on the current $8.57 and will provide breathing room to some of the most exploited workers in the US economy. The increase is also likely to ripple out to restaurants and other low wage sectors in the state since they compete for the same non-skilled labor force.

Last week a group of senators headed by Bernie Sanders introduced a bill to raise the federal minimum wage (currently $7.25) to $15 an hour. Although there is no expectation of the bill being passed, the introduction of the bill helps to bring the wage hike to the political agenda. It also helps to expose the real nature of those Democrats who are not willing to infringe upon capitalist profits even in speech.

The federal minimum wage has not been adjusted for inflation since 2009. On a broader scale, since 1968 the meager increase in wages has not kept up with that of productivity. This means that the profits of production have been increasingly hoarded by employers and Labor’s share of the US national income has steadily decreased over the last 35 years. This has been a central component of the rise in economic inequality in the United States. If productivity and real wages had grown at the same pace since 1968 the minimum wage would now be over $26. 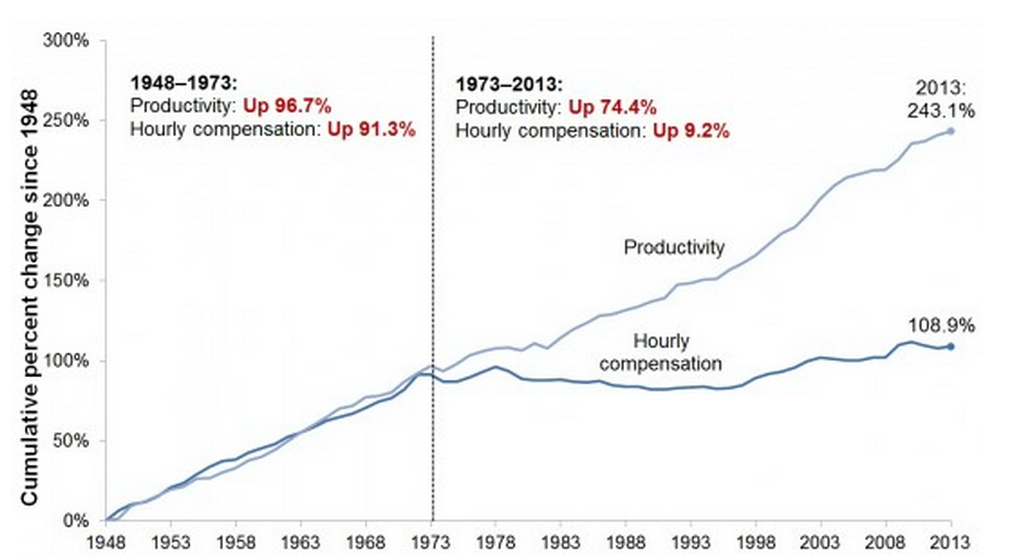 There is no reasonable basis to argue that employers cannot afford a $15 minimum wage nationwide.

SEIU and the potential of the $15 movement

The SEIU has played a central role in organizing the fight for a $15 minimum wage. The SEIU-backed FightFor15 organization is a major reference in this campaign and has provided an example for many other groups seeking a wage increase. They have recently embraced another goal: winning unionization rights for fast-food workers.

The SEIU is one of the few unions that have increased their membership base over the last 10 years. The unionization of fast-food workers would undoubtedly strengthen the labor movement and be an inspiring example to other low-wage workers. However, the SEIU is a far cry from a democratic union where members are encouraged to debate the politics of the organization , take decisions about the campaigns they undertake or even democratically elect all their representatives.

The top-down nature of the Fight For 15 campaign has been denounced by some activists and left militants. As opposed to building rank-and-file militancy at the workplace, the strategy seems to be disrupting business’ activity and affecting the company’s image in order to force bosses to sit and negotiate with SEIU officials.

It has to be said that this is at least better than the AFL-CIO approach to counterbalance union membership bleeding: during the above-mentioned wage hike in LA, the LA County Federation strove –after championing the wage increase—to keep its members out of the deal in an unscrupulous attempt to entice employers to sign union contracts.

It is unlikely that SEIU strategists would settle for a wage increase without a union for fast-food workers. The union has spent millions in organizing and supporting the Fight For 15 protests. There is no way the union bureaucracy would do this without expecting a return in the form of new member dues.

The friendly nod from Cuomo to the SEIU during last Wednesday’s announcement, Hillary address to the FightFor15 convention in Detroit , among many other signs, shows that the union will try to tie workers to the Democratic Party. Nevertheless, conquering union rights for millions of workers would be a major win. The $15 minimum wage has become a demand that can unite low-wage workers across the country and these recent gains can encourage more workers to go out and fight.

It remains to be seen if fast-food workers will win not only a wage-hike but a union; and if this victory would be able to help revitalize the languishing US labor movement. If a union is won the SEIU leadership will attempt to discipline workers to the usual top-down business unionism model; however there is the possibility that some of America´s most exploited workers, empowered by victory, could reach for and demand more.