On Thursday March 24, riot police clashed with French students protesting over the implementation of a vicious labour reform. The day of action brought thousands into the streets in several cities across the country. 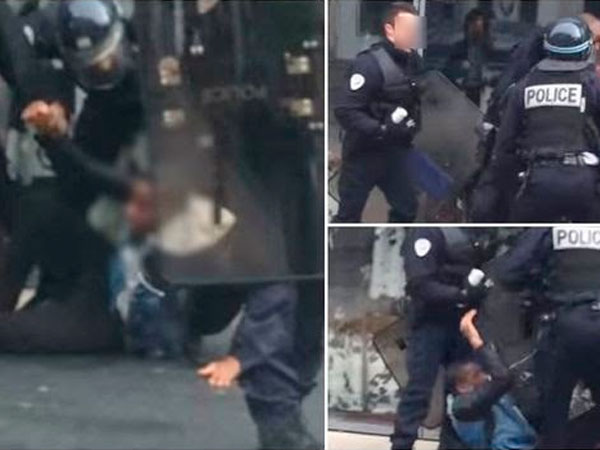 On Thursday, large crowds of university and high school students along with members of labour unions took to the streets in Paris and other cities to protest against President Francois Hollande’s labour reform law.

A video posted on YouTube shows a 15-year-old high school student lying on the ground before riot cops in full gear held him up and delivered a brutal blow to his head, knocking him onto his back. The student was left on the ground, his blood spilling onto the sidewalk. Another student told the press that they treated him “like a dog.”

This all took place in neighbourhood district XIX in Paris, a few hundred meters from his school. That morning, students blocked the entrance of their school. Police had responded with threats of what ultimately took place.

After the violent repression suffered by students on March 17 in Tolbiac and elsewhere, this time, police forces in the service of the government and its “state of emergency” selected an easy target – a student who was caught on his own.

This is an act of repression that must not go unpunished. It is part of the French government’s continued offensive aimed at breaking up the growing youth movement on the streets. Now more than ever, while the government is trying to divide us, we must fight back in unity. We should stand up and mobilize to denounce the state repression. We must keep mobilized to demand the withdrawal of the Labour Law.

Translated from an article in La Izquierda Diario by Alejandra Rios