We don’t need to impeach Trump. We have the power to throw him out. 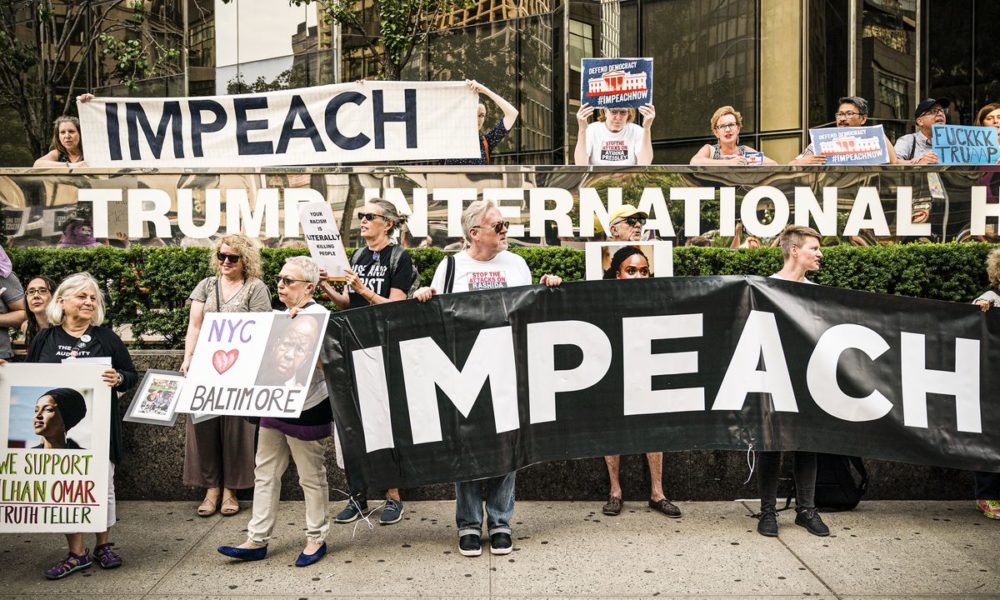 Social media erupted yesterday after Nancy Pelosi announced that she was opening an “impeachment investigation” into Donald Trump. Yes, Trump is a criminal and abuser who has no business anywhere in public life. But it is important to look at why, exactly, Pelosi and the rest of the Democratic establishment have chosen to take up the cause at this moment.

Up until now, Pelosi has been notably resistant to the idea of impeachment—even as Trump used his position to illegally enrich himself and his family, filled concentration camps, and launched racist attacks on Ilhan Omar. Before he was even elected, countless women accused him of sexual assault. Yet the Democratic establishment—then embodied by Barack Obama—sat down with him, shook his hand, and wished him well.

What then, after all this time, drove Pelosi et al to finally decide to act? Pelosi gave a clear answer: She was motivated byTrump’s attacks on Joe Biden via the Ukranian government. Many are very excited about this development—the hashtag “impeach the MF” trended on twitter, for example. Unfortunately, this “impeachment investigation” is, at best, an establishment rebellion against Trump for attacking one of their own. At worst, it is political theatre designed to sate the angry appetite of the American public.

The Democratic Party is undergoing a crisis with their left wing—represented by Bernie Sanders, Alexendria Occasio-Cortez, and their allies—making deep inroads. The establishment wing is increasingly on its heels and has chosen Joe Biden for 2020. Even as Biden stumbles in the debates and falls in the polls, most of the establishment is still lined up behind him. It is no coincidence, therefore, that this escalation against Trump is linked to the attacks on Biden. They are trying to paint Biden as the true threat to Trump—a rival who so scares Trump so much that he has to go to foreign governments and ask for their assistance. This narrative fits in with Biden’s entire message: he might not be as exciting as some other candidates but he can beat Trump. That is why now, seemingly all of a sudden, Nancy Pelosi and her allies are up in arms about Trump’s behavior.

Pelosi in particular has been coming under fire for resisting impeachment, with much criticism coming from her own party. Occasio-Cortez, for example, said “the bigger national scandal isn’t the president’s lawbreaking behavior—it is the Democratic Party’s refusal to impeach him for it.”

This new development allows the establishment to bring itself in line with the left wing and present a more unified picture of the party—while still propping up their preferred candidate. The war within the party can be halted in preparation for the supposed coming assault on Trump.

Pelosi’s announcement lacked any time frame for the investigation. This will allow the Democrats to milk the scandal for as long as possible. Not so long ago, they claimed the Mueller report would come out any day and end Trump’s presidency. For essentially that entire period, the Democrats were beating the drum of accountability and promising action just as soon as the report came out.

When the time came to act, however,the Democrats did nothing. They did not not shut down concentration camps, they did not halt funding on border “security” or the imperialist war machine and they could not even stand in solidarity with Ilhan Omar against racist attacks. Now they have given themselves another extension: Another excuse to make a lot of noise, give a lot of interviews, and ultimately do nothing much to oppose Trump’s agenda.

Impeachment itself is deeply anti-democratic. It is a method for one set of politicians to remove another without a vote from the people. The impeachment of Trump would just be yet another undemocratic procedure in a deeply undemocratic system. Trump won the election due to the electoral college, which was specifically designed to limit the power of the voting public. The U.S. system is inherently and profoundly anti-democratic. Internationally, impeachment has often been used as a tool for right-wing parties to oust left-leaning, democratically elected presidents. The clearest example of this was in 2016, when President Dilma Rousseff of Brazil was impeached in an institutional coup.

Impeachment functions as one of the last lifelines to maintain the state’s legitimacy. Impeaching a corrupt leader implies that it is the leaders themselves who are the problem—not the system that put them there and gave them the resources to commit their crimes. Impeachment lets the system off by scapegoating one individual. Donald Trump is an abuser, a racist, and a liar, but he did not spring forth from a vacuum. Impeaching him—were it to ever happen—would simply result in another, more palatable, representative of Trumpism taking power. In this case, that means Mike Pence—a man who in some ways is more reactionary than Trump.

Some may argue that impeachment is a necessary part of the checks and balances needed for the system to keep itself in check. As the Trump administration has illustrated, checks and balances in bourgeois democracy are based on everyone in government agreeing to play by “the rules.” But these norms are hollow and spineless. The entire capitalist state is designed to empower capital and disempower workers—there are no checks and balances on capital.

Impeachment offers a way out when the state is in crisis and other politicians are afraid of the risen people. It was not impeachment which threw Rosselló from his governorship of Puerto Rico earlier this year—it was the people taking to the streets. That is how change is achieved. Impeachment is being pushed now because the establishment is worrying that Trump might be removed by other means.

¡Que Se Vayan Todos! Throw Them All Out!

The Democratic Party wants us to believe that they will right the course of the country. Their impeachment investigations and electoral strategies will supposedly solve the problems that Trump has exacerbated. It is a cynical and unsurprising strategy from a party that is trying to look like the voice of resistance while desperately trying to prop up the crumbling system. They don’t offer a solution—they offer a distraction.

In 2001, during a political crisis in Argentina, the people took to the streets chanting, “que se vayan todos,” which translates as “they all must go.” Within a month, the protests kicked six different presidents out of office. None of these presidents were impeached, just as the governor of Puerto Rico was never impeached. The pressure of the people drove them out. We don’t need to impeach Trump. We have the power to throw him out. We don’t want him impeached—we want him gone, along with all those who are complicit. We want them all gone. ¡Que Se Vayan Todos!