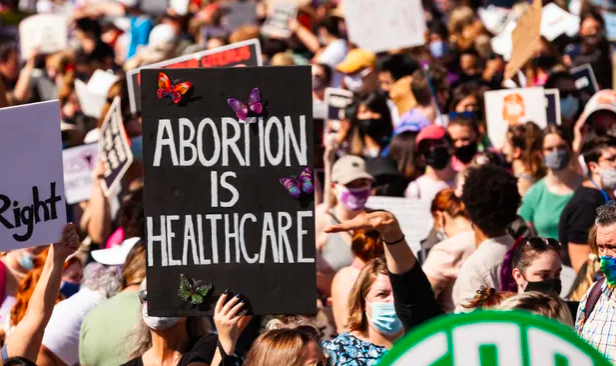 On May 2nd of this year, a draft opinion of the United States Supreme Court’s Dobbs v. Jackson Women’s Health decision was “accidentally” leaked. As it stands, the decision — concerning a Mississippi law seeking to ban abortions past the 15th week of pregnancy — would effectively overturn Roe v. Wade.

This decision is the culmination of decades of attacks on reproductive autonomy by the right, along with complacency and broken promises by the Democrats. If Roe v. Wade is indeed overturned when the decision is finalized, abortions will be criminalized in 22 states by constitutional amendment. Four other states would likely follow suit either by state constitution or other means. The legal right to an abortion would be lost in over half of U.S. states.

The draft, while confirmed to be authentic by Chief Justice Roberts, is not final, and the dissenting opinions were not released as part of the leak. The justices still have an opportunity to change their minds as well as the text of the opinion prior to its issuance. But the outlook remains bleak. If Roe v. Wade is overturned, then 50 years of progressive reproductive reforms will be instantly clawed back.

The ruling will harshly and disproportionately impact BIPOC and working-class women, transgender, and non-binary people across the country, producing a shockwave of economic and social ramifications for generations to come. It’s worth noting that when polled, only 32% of U.S. citizens support Roe v. Wade’s overturn, and 58% support abortion in all circumstances.

Sadly, the Supreme Court is not the only undemocratic institution standing in the way of progress in this country. On May 11th, the Women’s Health Protection Act failed in the Senate by a 49–51 vote. Senator Joe Manchin from West Virginia was the lone “no” vote from the Democratic Party, and is being blamed by liberals for the bill’s failure. But if this country were a true democracy and 60% of the population were in support of abortion, there would be no need for any of this legislative pomp and circumstance. The fact that one senator and nine unelected lifetime appointees can so greatly impact the fate of reproductive rights for everyone exposes the fundamental flaws in U.S. democracy.

Senate Minority Leader Mitch McConnell has even suggested advancing anti-life legislation into law should it become official. But these assaults on freedom and autonomy may not stop at abortion rights. Indeed, the wording of Justice Alito’s decision indicates that interracial marriage, same-sex marriage and even the right to engage in consensual sexual acts may also be in danger of being overturned too.

Making abortions illegal does nothing to stop abortions from happening; it only stops safe abortions, and reinforces class divisions. Wealthy people will always have access to safe abortions regardless of the law in the U.S.

According to studies, the abortion rate is 37 out of 1000 pregnancies in countries where abortion is legal, and 34 out of 1000 in countries where it is not; this is not a statistically significant difference. In the U.S., one in four women will have an abortion, and many more will rely on abortion as a backup to other forms of contraception. In 60% of abortion cases, the patient has already had a child.

There is a common misconception that abortion is a dangerous, painful procedure. This is a backwards generalization and belies the dangers of pregnancy. Consider the following:

The dangers and hardships of unwanted pregnancy are vastly greater than those of abortion. Both pregnancy and childbirth are traumatic on the body, even in the best of circumstances , and no one should be forced to carry a child or give birth against their will. And in the event a child is born unwanted, so begins an entirely new set of hardships.

Humans engage in sexual intercourse for reasons beyond procreation, and if it results in pregnancy, the pregnant person still has the fundamental right to bodily autonomy by choosing to end that pregnancy.

We often see the attack on abortion rights framed as a debate about morality and religion. The reality is much more about economics. Reproductive autonomy is directly at odds with the roles women have been historically assigned as caregivers in class society. Reproductive labor — required for raising and educating the next generation of workers — has been traditionally performed by unpaid family members, or tasked to undercompensated workers, most of whom are women. The capitalist class does not have to invest in the replenishment of its labor pool, because that has already been taken care of. We are taught that these nurturing roles are part of “feminine nature,” but the fact is that they are imposed on feminized people by capitalism.

Because women make up around half of the U.S. workforce, as well as the population at large, they are a force to be reckoned with. Women have the numbers to make demands for better wages, working conditions, childcare, healthcare, and many other reforms that could enhance the lives of millions. But they are constantly and violently held in check with regressive laws and customs that are couched in morality but have roots in capitalist accumulation. And this applies to trans men, non-binary, and all pregnancy-capable people, not just women alone, as these regressive laws are clearly an attempt to force hegemonic gender conformity in the face of years of progress. There may be periods of relative stability, like we have seen for the last 50 years thanks to Roe, but ultimately under capitalism, reproductive rights will never be safe. The only way to achieve lasting equality for all would be under socialism. In the meantime, total reproductive autonomy is an urgent demand for us to make.

The complacency shown nationally and in Denver after this leaked decision is very disheartening. Most seem to think the matter must be settled at the ballot box or in the halls of power, not in the streets. Locally, the struggle for reproductive rights has been relegated to well-marshaled parades with police escorts. Militancy and disruption have been actively discouraged by liberal non-governmental organizations subordinated to the Democratic Party, and by socialist groups pursuing their own sectarian priorities. There have been few open calls for coalition-building or for the organization of mass actions.

In the struggle that led to the Roe v. Wade decision, during a period of militant feminism in the late 1960s and early ’70s, there were massive levels of civil disobedience in the U.S. Speakouts, interruptions of legislative sessions, and huge demonstrations were able to change the consciousness around abortion rights.

We have yet to gain anything of substance in this country through the ballot box or by asking for permission. It was all gained by blood and sweat through militant struggle and solidarity in the streets and in workplaces.

Colorado may have its own legislation that keeps abortion rights within its borders safe, but this assault serves only to embolden the right. We should demand abortion be free and accessible to all. This is a fight for the liberation of everyone, not just a privileged few. An injury to one is an injury to all.

We need a militant, grassroots effort that engages the millions who oppose the leaked decision and puts their fury on full display for the entire nation to see. This is a call-to-action for all organizers and activists, new and old, and for all who stand against the right, the ruling class, and their attacks on reproductive rights. Let us unite in this struggle together!

We need to organize a mass movement around the following demands:

Mary Nicole Reeves is a reproductive rights activist, revolutionary socialist, and member of the Denver Communists.