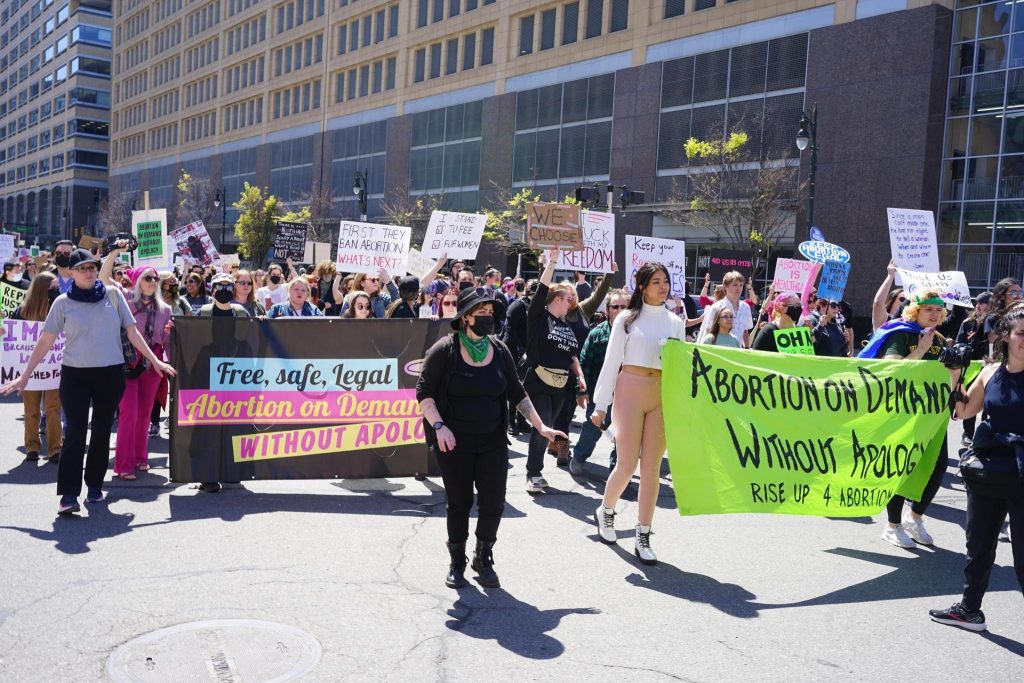 The stakes are high. If Roe v. Wade is struck down, a Michigan law from 1931 will immediately make it a felony to perform or receive an abortion, even in the case of rape or incest. As activists fighting this terrible outcome, we think it is crucial for the movement to discuss what political perspectives and strategies are needed to defend abortion rights.

Fighting for Roe and Beyond

The current challenge to Roe v. Wade brought by the Far Right has escalated the need to not only defend abortion but also to expand access to it under a federal law that guarantees free, safe abortion on demand, and without apology. Even Bernie Sanders said that Congress needed to pass legislation to codify abortion. This was one of the demands of the movement in Argentina that recently won their struggle to legalize abortion. They fought for a federal law so that courts and individual municipalities could not take it away. Indeed, since Roe v. Wade was decided by the U.S. Supreme Court in 1973, there have been almost constant efforts to restrict and limit abortion rights on the basis that it is not a federally protected right established by Congress.

The Dead End of Relying on Democrats or an Electoral Strategy

As pointed out in a speech published by Left Voice given by a feminist activist in Detroit, the Democrats have squandered multiple opportunities to pass a federal law protecting abortion rights. She even quoted Obama’s 2007 speech in which he promised, “The first thing I’d do as president is sign the Freedom of Choice Act.” Two years after he gave that speech he said abortion wasn’t his highest legislative priority. So it should be clear to everyone that, contrary to what “shoot ’em in the leg” Joe Biden has said, electing more Democrats in the midterm elections will not guarantee abortion rights. In fact, Democratic Party leaders like Pelosi and Schumer are campaigning for Henry Cuellar, a Texas pro-life Democrat, instead of his pro-choice progressive opponent Jessica Cisneros.

The Democrats are a political party of capitalism, as Biden and Nancy Pelosi have both stated publicly. Thus, what the Democrats desire most is to stabilize the system. They don’t seriously fight for many of the issues they say they support because doing so would create an avenue for the working class and oppressed to fight for our demands. This is why our liberation can never be achieved through the Democratic Party.

The Need for Self-Organization and Committees of Action

To bring the full power of the movement to bear on this issue, we have to develop organizations that are democratically controlled by the movement’s rank and file. Such organizations, be they committees of action in schools, in workplaces, or coalitions like the Michigan Coalition for Reproductive Liberation (MCRL), have to be based on collective leadership that expresses the interests of the working class and oppressed — particularly women, trans folk, nonbinary, and other LGBTQ+ folks, and people of color — who are directly impacted by the threat of overturning Roe. That means the organizations have to be politically independent to ensure that the movement’s goals do not get subverted by the electoral aspirations or needs of politicians seeking election. These committees and coalitions must function on a democratic basis and create opportunities in which the movement as a whole can discuss, debate, and collectively decide which direction the movement is headed, what its demands are, and what strategies and tactics it will employ.

For a United Front to Defend Abortion Rights

The forces and state institutions that we are confronting are massive; therefore, we can win only through mass action. At the same time that we are creating grassroots organizations and committees of action, we need to mobilize mass organizations, like unions and larger social justice organizations like Planned Parenthood or National Organization for Women (NOW), that support abortion rights. In a time of increased labor struggles we need to make sure that these organizations that represent thousands, and in some cases, tens of thousands, of workers and oppressed people use their full force to fight for the lives of the people they represent, instead of allowing all their energy to be directed toward the Democratic Party, a party more invested in stabilizing capitalism than in fighting for justice or liberation.

Rights Are Won in the Streets

While Michigan attorney general Dana Nessel and seven county prosecutors throughout Michigan have signed a pledge to not enforce an abortion ban, this pledge will only be a symbolic gesture unless the movement fights to prevent the ban’s enforcement. This would include militantly defending abortion clinics that refuse to close.

Another issue is that many abortion providers, according to the Wall Street Journal, plan on shutting down if Roe is overturned. These providers and some physicians fear being arrested. While that concern is understandable, they should be more concerned about the social ramifications if they don’t courageously challenge a ban, a challenge that the movement in the streets is prepared to meet.

The movement has to urge these providers to stay open or convince the workers and physicians who make these clinics operate to keep them open alongside the movement if the clinic owners refuse to do so. Such a bold act would create an important opportunity to challenge the ban and forcefully demand the passage of state and federal law protecting the right to abortion.

In return, the movement would have to be prepared to employ multiple tactics to disrupt “business as usual” and counterpose the collective power of the working class and oppressed to the repressive actions of the state and the right wing, which is hell-bent on creating a dystopian future in which people with uteruses have no control over their bodies or their lives. We need to be organizing walkouts, work stoppages, and disruptive demonstrations to make the chant “No Justice, No Peace!” mean something.

The movement must rely on the collective power of the working class and not invest its limited energy or hopes in lawsuits — the courts have already shown why we can’t count on them — such as the one filed by Governor Gretchen Whitmer and Planned Parenthood, or in the effort to place abortion rights on the November 2022 Michigan ballot. It is actually an undemocratic practice to allow an electorate to decide which rights a marginalized group has. If that was our method during the civil rights movement, we would have never defeated Jim Crow in the South.

This Fight Is a National One

The impending overturning of Roe v. Wade, and decades of the erosion of abortion rights at the state level, shows clearly that Supreme Court decisions alone are insufficient for protecting the rights of the oppressed. Our fight must be a national one or else risk fracturing into state-level organizing that, at best, can be co-opted into electing politicians on unfulfilled promises of protecting abortion rights on the one hand, or directed toward organizing unsustainable and risky networks for underground abortions on the other. Worst of all, focusing only on local struggles leaves us isolated and disconnected from the rest of the movement, whose solidarity we will need, and to which we will have to show solidarity if we have any chance of defeating the right wing and other sectors of the state seeking to enforce the ban. The abortion rights movement nationally must be prepared to be mobile and to act boldly and unapologetically in defense of campaigns for abortion rights in states with the most oppressive anti abortion laws, like the Freedom Riders who traveled to the Jim Crow South to support struggles against segregation.

At the national level, we need to demand a federal law guaranteeing access to free, safe, legal abortions, and that demand can only be won by a movement that combines its forces from local struggles into a national one. Only a nationally coordinated, politically independent movement, like that modeled in Argentina, can challenge the co-optation of politicians who have campaigned for the past 50 years on justified fears of the right wing stripping our rights while failing to take any action to protect them.

Connecting the Abortion Rights Movement to Other Struggles of the Oppressed

Forms of politically independent organization at the national level will only become more important as the rights of other oppressed groups like trans youth, LGBTQ+ people, immigrants, and racial minorities continue to come under attack, and may be eroded in new ways opened by the precedent insinuated by the leaked Roe v. Wade decision. Language in the leaked Supreme Court decision questioning privacy rights opens a path for new legal means by which the right wing can enforce capitalist white heteropatriarchal hegemony. States like Texas, Arizona, Louisiana, and Alabama have already begun legislating attacks on trans healthcare and the decision may open a path for reinstituting sodomy laws and overturning the decision legalizing same-sex marriage. Access to birth control may also come under threat in some states. The decision may even have implications for government surveillance and data privacy.

The abortion rights movement must recognize that these struggles are interconnected, and it must prepare itself to take action alongside other oppressed people to engage in shared struggle and to increase our collective power.