Why did Brazilian Workers Go on Strike?

Yesterday there was a massive general strike in Brazil. Why did the workers refuse to go to work and take the streets in mass protests? 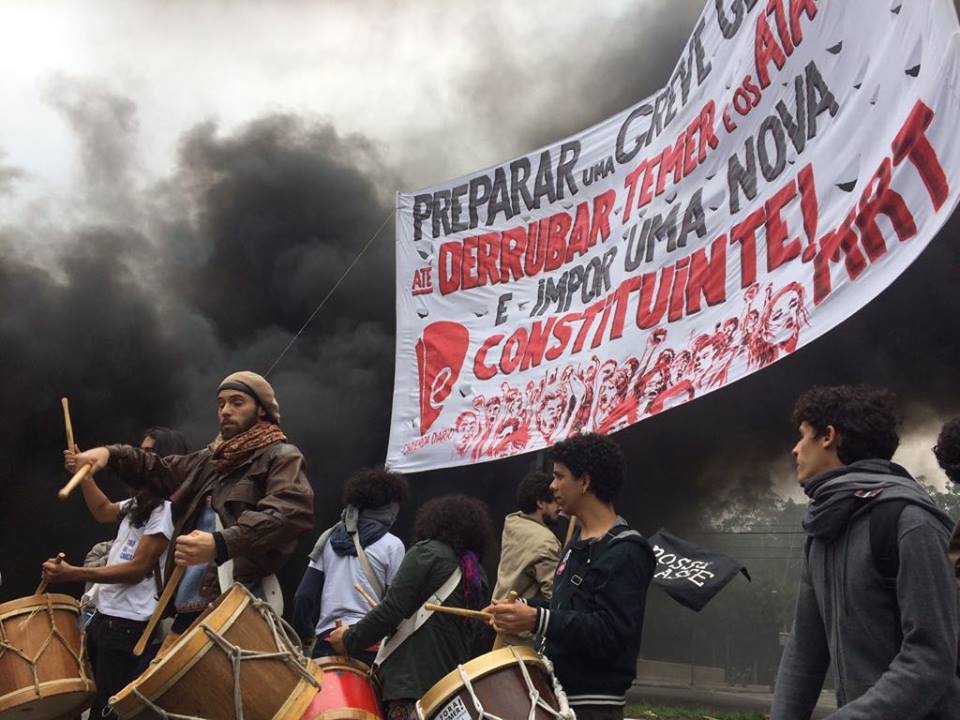 April 28 marks the largest labor strikes in Brazil in decades. Transit workers, industrial workers, steelworkers, public and private school teachers, university professors, healthcare workers, telemarketing operators, taxi drivers and others stopped working on Friday, April 28. Demonstrations took place in various cities throughout Brazil. The strike, which was called by the labor unions, takes aim at President Temer’s austerity measures. The most egregious of these is a pension reform law that would add eleven years to the age of retirement.

Temer rose to power last year when the business lobby, judicial branch and Congressional conservatives orchestrated an institutional coup, which laid the groundwork for innumerable market-oriented reforms that will hit working class women and people of color the hardest.

Brazil is in the midst of a vast economic crisis. Unemployment is at 13.7%, which means that 14.2 million people are unemployed. The economy has shrunk by 3.6% and the public debt is at 78%.

The discontent against the austerity measures was first expressed by youth, who organized and occupied schools and universities around the country. They were protesting against a spending cap on healthcare and education and against cuts in funding for schools, which are already falling apart and are under staffed. Over a thousand schools were occupied in 2016. The spending cut was passed, but not without a fight that politicized Brazilian youth around the country.

Later, the discontent against austerity measures was expressed when the working class pushed the national trade unions to organize a work stoppage on March 15. This work stoppage had massive support from workers and the general population, who sought a response to the administration’s attacks. São Paulo, Brazil’s largest city, played a central role, with transit workers and teachers on the front lines. The working class burst onto the scene, staging work stoppages in various public service sectors, in universities and schools, as well as in strategic and industrial sectors.

Despite working class resistance, the Temer administration remained steadfast in its attacks and passed a law to deregulate labor markets and expand subcontracting. This affects all of the working class, particularly women and people of color who are historically most vulnerable to subcontracting in Brazil. Subcontracted workers earn less, are more likely to experience death or injury on the job and are more likely to be hyper-exploited, sometimes spending months without receiving their pay checks.

On April 26, the lower house of congress voted to reform Brazilian labor legislation in such a way that the few rights and securities afforded to workers will be subject to “negotiation” by each employer.

Furthermore, a new congressional session is to be held regarding pension reforms. Despite the fact that the administration made some alterations to the reform in view of workers’ resistance, it will still mean that the majority of Brazilians will be forced to work without retiring until their deaths. Originally Temer proposed that both men and women retire at age 65– adding 10 years to the age of retirement. However, due to resistance, the new proposal reduces the age of retirement to 62 for women. It also makes it more difficult for people to access their pensions, increasing the years of work required in order to receive retirement funds.

This all takes place amid the largest corruption scandal in Brazilian history. Executives from the country’s leading construction firm, under plea bargains, have accused countless politicians of corruption involving the state oil giant, Petrobras. Over 100 politicians were accused of corruption and are currently under investigation. This reveals once more that capitalist politicians use their posts to benefit themselves and the businesses that they serve.

President Temer already has less than a 10% approval rating and his reforms are massively unpopular. Persisting with the attacks, Temer aims to fulfill his role as the institutional coup’s chosen leader. That is, to attack workers more swiftly and harshly than the Workers’ Party (PT) had done. However, the PT (Workers Party) is also implicated in corruption and austerity on both the federal and local level.

After the mobilizations of March 15, labor leaderships, which have grown out of touch with the rank-and-file, entered into a truce with the administration– opening the door for the attacks that followed. Subsequent action against austerity measures were pushed to April 28– a month and a half after a mass work stoppage with immense popular support. This can only be interpreted as seeking to pacify and demobilize an increasingly dissatisfied working class.

This historic day demonstrates that the working class has a great will to fight against the austerity measures and all attacks on the working class. Despite the union bureaucracy dragging their feet, the working class has brought the country to a halt. Today could have been even more combative had the unions called for mass protests in the streets instead of asking workers to stay home and take the day off. In order to truly defeat the austerity measures, Temer’s coup government must be ousted and each of his attacks repealed. All who defend the removal of Temer from power should unify behind the call for a general strike until Temer is overthrown, without allowing this demand to be used by the Worker’s Party and its allies in the labor movement to reelect Lula in 2018.

While these mobilizations may serve to strengthen the Workers Party (PT), which has held the Presidency for 14 years prior to the institutional coup, it’s imperative to point out the PT’s attacks on the working class. Although today the PT seeks to put themselves at the forefront of the movement against austerity and subcontracting, they implemented these very policies while in government. For example, while the PT was in power, subcontracting increased from 4 million to 12.7 million jobs. They have also been implicated in corruption scandals, along with all of the overt capitalist parties. Although the PT was vastly unpopular both before and after the coup, losing many local government posts in the midterm elections, former President Lula is the most popular politician in Brazil today and may win the 2018 elections. We cannot be tricked into believing that electing the PT will solve the problem. It’s not enough to change the players, we must also change the rules of the game. This is why there must be a constitutional assembly to rewrite the constitution and to rethink and reformulate Brazilian “democracy”, stripping politicians of their privileges.