Why Is Israel Campaigning for Trump?

Both the Democratic and the Republican parties support the strategic alliance the United States has with Israel, no matter the cost — but Trump’s reelection campaign is the primary beneficiary of the pro-Israeli lobby. 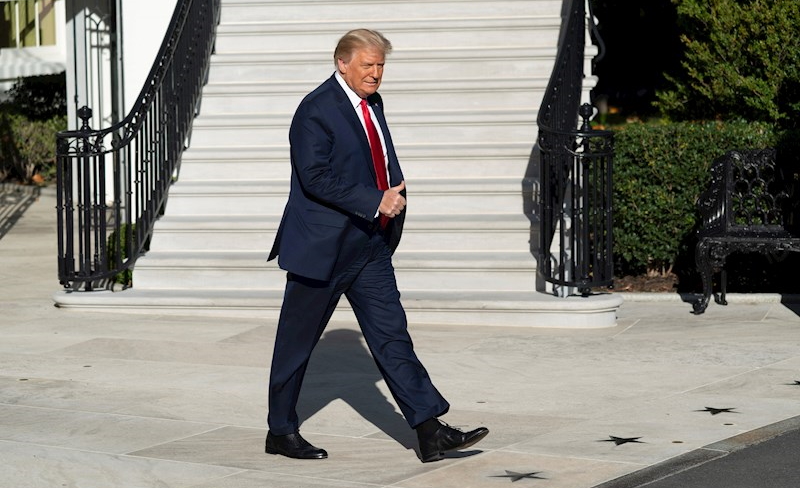 Were Israelis to vote in the U.S. elections, Donald Trump would have a good chance of securing another four years in the White House. So says a poll from early October published in the Jerusalem Post: some 63.3 percent of Israelis prefer Trump’s reelection, while only 18.8 percent would choose Democratic candidate Joe Biden.

Polls show Trump losing to Biden, on average, by a comfortable double-digit margin. The exceptions include some parts of the U.S. Midwest and, apparently given these favorable numbers, Israel. It should come as no surprise, then, that the Republican campaign will try to inject some of these good Israeli vibes into the United States — even though foreign policy, with the exception of the anti-China campaign, has very little weight in the presidential race. In the lead-up to the election, we can expect Trump to try to cash in on the “successes” of U.S. policy in the Middle East.

No one doubts Biden’s commitment to Israel. In the same Israeli poll, along with the preference for Trump, half the respondents acknowledged that the “friendship” between the United States and Israel will continue to thrive even if the White House changes hands. Despite occasional moments of significant friction, the alliance is a matter of utmost importance for U.S. imperialism.

Barack Obama’s differences with Benjamin Netanyahu, Israel’s longtime prime minister, did not keep him from becoming the president who gave Israel the largest military assistance package ever — no less than $38 billion over 10 years.

Sometimes, however, the dog bites the hand of the person who feeds it. That seemed to be what Netanyahu did during the Obama years, undermining Obama’s “multilateral” policy to stabilize the Middle East and contain Iran’s nuclear challenge by conspiring with Republican hawks. And while there are no differences between Republicans and Democrats regarding the strategic nature of the United States’ alliance with Israel, a Biden presidency could raise expectations for the resurrection of some version — even a diminished one — of the nuclear agreement with Iran to which the European powers remain signatories.

From a domestic political perspective, the need to put an end to the disasters in Iraq and Afghanistan continue to be weighty issues. But in recent years, other actors that influence U.S. foreign policy have been rising in importance. Historically, the so-called “Zionist lobby” (in the form of the American Israel Public Affairs Committee, AIPAC) has had more influence on the Democratic Party. However, the pro-Israel evangelical sectors — which are grouped together in Christians United for Israel (which has a growing influence in other countries, such as Brazil) — have burst onto the political scene. This extreme Right grouping — Zionist and anti-Semitic at the same time — turns out to be part of Trump’s hardcore electoral base and maintains an organic relationship with his government. Vice President Mike Pence and Secretary of State Mike Pompeo are regular speakers at the organization’s annual meetings.

This explains why Trump’s pro-Israeli or, rather pro-Zionist ultra-right-wing policy eclipses the already high standards of U.S. imperialism. In his nearly four years at the helm of the White House, Trump pulled the United States out of the nuclear deal with Iran; reimposed harsh sanctions against the Tehran regime; and assassinated General Qassem Suleimani, a key strategist of Iranian Middle East policy. He dragged some stalwarts, such as Brazilian President Jair Bolsonaro, into recognizing Israeli sovereignty over the Golan Heights and Jerusalem as the capital of the Zionist state. As Trump himself claims, this move was aimed at American Zionist Christians. More recently, he imposed on the government of Serbia a commitment to move its own embassy from Tel Aviv to Jerusalem, a demand that came as no surprise in the recent White House-sponsored Serbian trade agreement with Kosovo. This sparked a crisis between Serbia and the European Union, which opposes recognition of Jerusalem as the Israeli capital, and called into question the already complicated incorporation of Serbia into the European bloc.

Perhaps most significant, however, are the consequences of Trump’s reconfiguration of alliances between Israel and the United States’ allies in the Arab (Sunni) world into a more or less permanent front against Iran and its allies to liquidate the latter nation’s ambitions for regional leadership. This reconfiguration also challenges the “Ottoman” delusions of Recep Tayyip Erdogan, Turkey’s president.

This reconfiguration of Middle Eastern geopolitics has global implications, as can be seen in the current conflict in the Caucasus between Armenia and Azerbaijan, where Israel has important interests. A key piece of the reconfiguration are the so-called “Abraham Accords” signed in the White House in August and September that “normalized” relations between the United Arab Emirates and Bahrain and the Zionist state in exchange for nothing — except for Netanyahu backing away from the wholesale annexation of almost the entire West Bank. It is not clear whether other Arab or Muslim states and Gulf monarchies will follow the same path. It seems difficult for Saudi Arabia to make a similar gesture; the Saudis would likely prefer to maintain informal collaboration with Israel while continuing to subordinate “diplomatic normalization” to the Zionist state’s recognition of the Arab Peace Initiative launched by the Saudi monarchy in 2002.

While for now the agreement is limited to two small kingdoms that have not even been at war with Israel, the Emirates and Bahrain have joined Egypt (1979) and Jordan (1994) as the only Arab states to recognize Israel. What is new is that these accords do not even include a formal demand for the creation of a Palestinian state and the end of the Israeli occupation. They represent symbolic (and material) changes to the extent that reactionary Arab bourgeoisies have displaced the “Palestinian question” in favor of other geopolitical priorities — in particular, confronting the danger that Iran represents for their interests. And they also make collaboration with Israel profitable. As a reward for the agreements, Trump gave the green light to a massive purchase by the United Arab Emirates of U.S. heavy weaponry, including F-35 fighter planes.

Netanyahu is in a weak position because of his own corruption scandals, his administration’s handling of the coronavirus pandemic, and a frightening economic and social crisis that has provoked mass demonstrations. All these elements have combined to bring the current unstable government coalition that integrates Netanyahu’s Likud party with the Blue and White Party of Defense Minister Benny Gantz to the brink of collapse. In this framework, the Abraham Accords were a breath of fresh air. The Knesset (Israel’s parliament) ratified them overwhelmingly on October 15, with the rather lonely opposition of the Joint List (a mostly Arab bloc).

This formula imposed on the region combines implicit and explicit “normalization” of relations between the “Sunni alliance” and the State of Israel and leaves two losers: Iran and the Palestinian people.

Although the United Arab Emirates claimed to have achieved a “suspension” of Netanyahu’s most offensive plan to annex the Palestinian territories, the Abraham Accords in no way preclude that prospect. On the contrary, by Netanyah’s own calcuation, “According to the American plan, Israel will win 30 percent of Judea and Samaria” (as the Zionist state calls the West Bank) — 10 times more than any previous plan and without having to dismantle any existing settlements or return any occupied territory.

Just in case any confirmation of this was needed, the Israeli government ended its moratorium on expanding settlements less than a month after signing the peace with Bahrain and the UAE, announcing it will resume its plan to build 4,000 new houses in the occupied Palestinian territories.

Trump presents these agreements as a success of his policy of “peace” in the Middle East, which has as its premise the liquidation of any aspirations of the Palestinian people to have their own state. This includes the definitive abandonment of the failed “peace process” and the “two-state solution” previously promoted by the United States, which — as critical historians such as Ilan Pappé and Norman Finkelstein explain — has deprived the Palestinian people of their elementary rights, deepening the colonial situation and the “incremental genocide” perpetrated by the Zionist state.

Whether it is Trump or Biden in the White House, the institutionalization of the apartheid regime against the Palestinian people will continue to advance. This is the conclusion that thousands of American youth of Jewish origin have drawn, and who today are active against the occupation and the pro-Zionist and pro-Israeli policies of the imperialist two-party system.

First published in Spanish on October 15 in La Izquierda Diario.