Why Is Trump Refusing to Concede?

Even though Joe Biden has been proclaimed president-elect, Donald Trump refuses to admit defeat. This means the transition between the two administrations has not formally begun, breaking with the customs of the bipartisan regime. 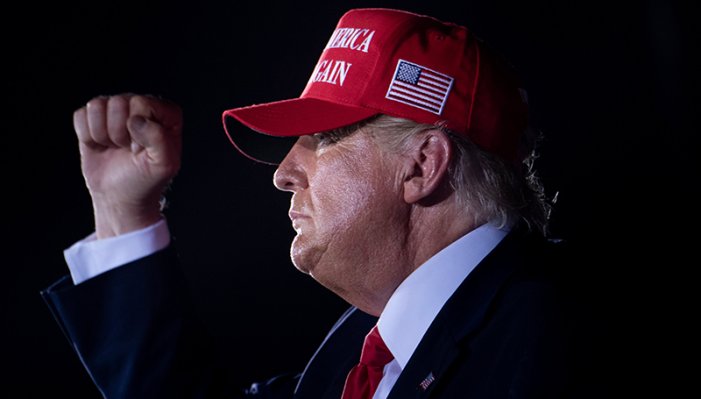 On the night of November 3 there was a brief window of political instability in the United States, but by Saturday November 7, this window closed for almost everyone, after Pennsylvania and Nevada painted themselves blue and allowed Biden to surpass the magic number of 270 delegates in the Electoral College.

In essence, the Democratic and Republican parties are the two parties of Wall Street and the imperialist bourgeoisie. But when it comes to legitimizing the United States’ plutocratic political regime, the parties rely on different electoral coalitions to do so, as they did in this election with a few nuances. The Democrats’ electoral base is mostly in urban areas and includes lower-income, unionized, youth, precarious, Black, Latino, and LGBT sectors. The Republican’s electoral base is concentrated in rural areas and includes voters that are male, white, middle-aged and have incomes over $100,000 a year. In this election, Trump surprisingly performed better among sectors of the Latino vote compared to 2016. Trump expectedly performed well among Cuban gusanos living in Florida but he also captured Democratic strongholds such as the impoverished Rio Grande Valley in Texas (the Rio Grande Valley Republicans according to Mike Davis). Overall, the election was not a massive repudiation of Trump, who, against all odds, increased his electoral support. It was more closely contested than expected and ended up being defined by the same swing states that defined the 2016 election, which left an uncomfortable feeling of a “catastrophic tie.” Although Biden won not only the Electoral College but also the popular vote, the 70 million votes that Trump won are political capital.

In this context of deep polarization, Trump’s policy of torpedoing the election has opened up a postelection scenario that is rarefied and fraught with tension.

It was predictable that Trump would refuse to be a “lame duck” in the little more than two months he has left in the White House. He denounced fraud in the last stretch of the campaign, when his defeat was being felt. And it is no secret that he had already prepared an army of lawyers, led by former New York City strongman Rudy Giuliani, to litigate in the courts whatever was denied him at the polls.

Trump insists that he did not lose but was robbed of the election. He made court appearances in some states, particularly in the swing states where Biden turned the tide with the mail ballot count, which was instrumental in his victory. But it is clear that Trump has little evidence to prove it. Adverse court rulings indicate that the judiciary is unwilling to add to the climate of instability and uncertainty by calling the election result into question. Furthermore, the ruling class has an interest in a government — Republican or Democratic, it doesn’t matter — that has the legitimacy to pursue imperialist capital’s agenda. This is so both domestically, after the mass mobilizations against racism, and internationally, in a world convulsed by the coronavirus pandemic, geopolitical tensions, and the emergence of China as a strategic competitor.

The analysts are rehearsing different explanations for Trump’s resistance. There are rigorous psychological interpretations, pointing to Trump’s denialist and narcissistic character, incapable of processing a defeat. And there are diverse political hypotheses. But hardly anyone, not even the media and magazines most closely associated with Trump, seriously considers that Trump can reverse Biden’s triumph. Even those who publish intrigue about the supposed electoral irregularities, like the National Review, say it is time to turn the page and prepare for war against the next government.

The establishment has reacted with bewilderment at the Republican Party’s support for Trump’s denialism. Indeed, the Grand Old Party has aligned itself with the president’s strategy, with a few exceptions like former President George W. Bush and John Bolton, the neoconservative hawk who tells Trump that his time is up. Trump’s supporters include state bureaucrats, like Secretary of State Mike Pompeo and the Republican-majority heads of the Senate and the House minority. This makes personalist explanations untenable.

Everything would indicate that Trump’s real strategy is not to entrench himself in the White House (which he cannot actually do because he will be evicted on January 20), but to maintain the Republican Party’s adrenaline and prevent its defeat from leading to a wearisome tribalism. Despite having lost the White House, the GOP maintains a very important share of state power and a high capacity to influence the domestic and foreign policy of U.S. imperialism. It has a solid majority in the conservative-leaning Supreme Court and will most likely retain control of the Senate, an indispensable tool for spoiling the Biden administration. In addition, the Republicans advanced in the House of Representatives, cutting the Democrats’ advantage.

The evolution of the relationship between Trump and the Republican Party is still an unknown. Several years before the “Trump phenomenon,” two journalists published an interesting study highlighting the ability of American conservatism to metabolize its radical right-wing factions, serving the interests of the political and corporate elite (John Micklethwait and Adrian Wooldridge, The Right Nation: Conservative Power in America). The incorporation of the Tea Party into the Republican machine and the Trumpist transformation of the GOP seems to prove them right.

Trump has claimed to have enough reactionary political will to remain a political force; time will tell with what allies he will emerge and what form “Trumpism” will take. Will it be an intense right-wing faction within the Republican Party like the Tea Party but with infinitely greater power? Or will it lay the foundation for a new right-wing populist party-movement? These are open questions.

In the immediate term, a dangerous interregnum has opened up for bourgeois governance, with little precedent in recent history.

The crisis of 2000, when the court decided to give the presidency to George W. Bush, does not count because Al Gore desisted from litigation and quickly agreed to pass off the theft as a full-fledged Republican victory.

Some historians point to 1800, when the Federalist Party tried to steal the presidency from Thomas Jefferson, who became president after the House of Representatives broke a tie vote between Jefferson and Aaron Burr. This bizarre episode was masterfully narrated by Gore Vidal in Burr (1973), one of his novels in the historical saga of the birth of the American republic.

Closer in time, there is the traumatic transition between Hoover and Roosevelt, which lasted four endless months in which bank runs and bankruptcies were the order of the day. And in the last 17 days of Richard Nixon’s presidency, in July 1974, Nixon refused to admit that the Watergate scandal had liquidated him politically, and he was therefore reluctant to resign.

Trump became the fourth member of a club to which no one who had been at the height of bourgeois power wanted to belong: presidents who lost reelection. The other three are Herbert Hoover, who lost to Franklin Delano Roosevelt in 1932 as a result of the Great Depression; Jimmy Carter, who was defeated in 1979 by Ronald Reagan under the impact of the hostage fiasco in Iran and the oil price crisis; and George Bush Sr., who lost to Bill Clinton in 1992 because of an economic slowdown and shifting geopolitical climate.

The comparison is not accidental. It coincides with another dangerous historical moment for the ruling class, in which a huge health and economic crisis are combined with the return of class struggle and elements of political radicalization.

While Trump may be unable to undo the outcome of the election in the Supreme Court, that does not mean his politics are harmless for a Biden administration. For millions of Americans who make up his electoral base, Biden’s government will be illegitimate (70 percent of Trump’s voters, according to a recent poll), and that is certainly a weakness for Biden. It is not the only challenge. Just as “right-wing populism” is a factor at the polls and to a lesser extent in the streets — Proud Boys, “vigilantes” — so is the class struggle and the political radicalization to the left of a broad vanguard — youthful, multiracial, diverse, hardworking, precarious — that was the basis of the “Sanders phenomenon” and of the emergence of the Democratic Socialists of America, which adopted a strategy of joining the Democratic Party. This led to frustration, first with the defeat of “Sanderism,” which simply joined the campaign of the neoliberal Biden, and then with the politics of lesser evilism.

The existence of this leftist political-ideological phenomenon explains why “socialism” has been in discussion in the campaign. The material bases of this phenomenon — the exhaustion of neoliberal hegemony and its survival under the government of Obama — have expanded with the coronavirus pandemic, the acute economic recession that affects about 25 million workers, including the newly unemployed and underemployed, and racial and police violence. The unenthusiastic Biden government, backed by Wall Street, will have to deal sooner rather than later with these deep tendencies toward greater political radicalization and class struggle.

First published in Spanish on November 12 in La Izquierda Diario.