Why Socialists Must Defend Wet’suwet’en

Large areas of Canada are being brought to a halt by Indigenous people and their allies across the continent. They are organizing against the construction of a liquid natural gas pipeline through Wet’suwet’en territory. This struggle serves as an example of the possibilities of Indigenous and non-Indigenous worker solidarity, and an object lesson in why socialists should support such efforts across the world. 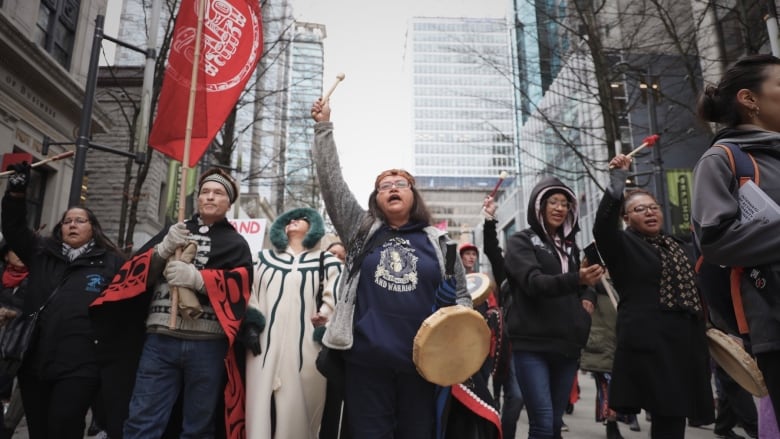 For many years, various corporations have proposed and tried to build pipelines through Wet’suwet’en territory. In order to keep the land, air, and water clean, as well as their people safe from both accidents and gender-based violence, Wet’suwet’en and their neighbors have fought them all. As Unist’ot’en Hereditary Spokesperson Freda Huson says, “Our people’s belief is that we are part of the land. The land is not separate from us. The land sustains us. And if we don’t take care of her, she won’t be able to sustain us, and we as a generation of people will die.” In 2016, The Candadian multinational Enbridge tried to build a tar sands oil pipeline through Gitxsan and Wet’suwet’en territory, but fierce Indigenous opposition halted its construction. Today, Coastal GasLink — a division of TransCanada — is planning a $5 billion pipeline that would run over 400 miles across so-called British Columbia, a Canadian province made up almost entirely of unceded Indigenous land, as part of LNG Canada, a huge fracked gas project which is Canada’s largest infrastructure project in history.

Wet’suwet’en hereditary chiefs unanimously oppose Coastal GasLink’s pipeline and do not give consent for the work to take place on their land. Wet’suwet’en law, called ‘Anuc niwh’it’en, confirms each of the clans’ right to control access to their land, through the feast system and their hereditary chiefs, and not through the colonizer-created elected chief and council (which has approved the pipeline). They affirmed this right in 2009 by engaging in what the land defenders call “reoccupation” of their land and creating a checkpoint at the entrance to their territory. The checkpoint, Unist’ot’en Camp, has expanded to a small village with year-round inhabitants. The Wet’suwet’en people continue to maintain the checkpoint and have fought to keep materials and workers for pipeline construction out of their territory.

In 2018, Coastal GasLink applied for an injunction against Unist’ot’en Camp, alleging that the Wet’suwet’en were “occupying, obstructing, blocking, physically impeding or delaying access” to their own land. Outrageously, the injunction was granted by Canadian courts. Resisting the decision, the Unist’ot’en camp did not dissolve; in fact the next clan over, Gidimt’en, built a checkpoint as well.

In response, in January 2019, Canada sent in armed and militarized police, something they have done time and time again on Indigenous land. In January 2020, it came to light that Royal Canadian Mounted Police (RCMP) officers had been preparing to shoot and kill the people peacefully defending the checkpoint, with the aim of “sterilizing [the] site.” While no one was killed, 14 people were arrested and the checkpoint was dismantled. In February 2020, the RCMP conducted a series of military raids again, arresting a dozen Unist’ot’en leaders to shut down the checkpoints once more. There is still an RCMP presence there a month later, monitoring Indigenous residents and land defenders. These attacks are one piece of a long history of settler violence against Indigenous people in so-called Canada.

Even though they will do nothing to stop it, the Canadian government knows that the RCMP invasion of Wet’suwet’en is unsupportable; the 1997 Delgamuukw Supreme Court ruling determined that the Wet’suwet’en and neighboring Gitxsan people have a legal right to the land, since they never ceded it to Canada. This amounts to Canadian confirmation of what the Wet’suwet’en have known all along, since the invasion of their territory first began centuries ago: Wet’suwet’en, including Unist’ot’en homestead, is not a part of the country of Canada, and Canadian law holds no sway there. “The Unist’ot’en homestead is not a protest or demonstration. Our clan is occupying and using our traditional territory as it has for centuries” explains the website for Unist’ot’en Camp. When settler Canadian politicians say “the rule of law” must be upheld, what law do they mean?

Solidarity Across Canada and Beyond

The land defenders at Unist’ot’en and Gidimt’en are not alone in their fight. Across Canada, there have been solidarity protests and, vitally, rolling blockades of railways, bridges, ports, and roads. For example, members of the Secwepemc Nation, also in so-called British Columbia, blockaded Canadian Pacific rail. A blockade in Tyendinaga Mohawk Territory, across the continent from Wet’suwet’en, stopped the commuter rail between Montreal and Toronto, the two biggest cities in Canada. Via Canada, the largest passenger rail company, had to cancel almost all its service at various points. These blockades are forecast to cost rail companies billions of dollars, putting pressure on bosses, union leaderships, and bourgeois politicians to solve the problem quickly. Some, such as Canada Pacific executives, argue for Prime Minister Justin Trudeau to meet with Indigenous leaders in a nation-to-nation meeting, while others have called for violence against the protesters. One columnist said “this is not protest, it is insurrection” and that it should be met with force. Already, one unarmed Indigenous land defender was killed by militarized police. While Wet’suwet’en chiefs have reached a draft agreement with the Canadian government, the blockades continue and the deal has not yet been approved by the Wet’suwet’en people.

These blockades have been Indigenous-led, but both Indigenous and non-Indigenous socialists and workers should support them. Pipelines are one of the stark physical manifestations of the ways that imperialism and capitalism are destroying the planet. In practical terms, the construction of a pipeline through Wet’suwet’en will mean more extraction and burning of fossil fuels for decades to come, as the living beings on this planet are poisoned and die. However, we can fight it and we can win. Energy corporations are already running scared from the resistance this pipeline is facing, trying to rush through construction and maximize profits before they are forced to stop again. Transportation companies are feeling the heat as well.

In turn, rather than cease work on the pipeline, these corporations are punishing workers. This is true of affected rail companies, too. Executives at rail companies such as CN Rail have made the decision to lay off hundreds of workers rather than agree to protesters’ demands. In fact, the vast majority of recent layoffs were already announced, leading Wet’suwet’en allies to question whether executives were simply using the blockades as cover to fire their workers. Non-Indigenous Canadian workers should recognize that their fate is tied to the fight for Indigenous self-determination. The enemy of all workers, Indigenous or not, is the Canadian state and the global capitalist class, not each other.

When explaining the background of their campaign. Unist’ot’en Camp points out the empty promises of energy corporations, which pledge jobs to try and entice workers to abandon solidarity. However, to use the example of the Keystone XL pipeline, which is also owned by TransCanada and is almost twice the length of the proposed pipeline through Wet’suwet’en, there were only 3500 temporary jobs and a mere 35 permanent jobs. Additionally, while $178.2 billion of the profits from the Coastal GasLink pipeline would go to the company, only $364,000 would go to each Indigenous group over the course of 35 years. That’s a pittance in return for poisoned land. “Should we settle for crumbs from the industry’s feasting table?” they ask. We should not.

Organizers of these blockades make clear that they are not just fighting against one pipeline, they are fighting for Indigenous self-determination, a value socialists must uphold. As Trotsky writes, “National self-determination is the fundamental democratic formula for oppressed nations. Wherever class oppression is complicated by national subjection, democratic demands take first of all the form of demands for national equality of rights – for autonomy or for independence.” Working class people should be unified across all nations, but before any can even be free, no one can be forced to be part of a colonial empire. Thus, it is imperative that socialists respect and fight for Wet’suwet’en and other Indigenous calls for independence and sovereignty.

There can be a tension between workers’ movements and decolonial movements, as the former is about redistributing wealth and the latter is, in part, about redetermining what is considered wealth. However, as it says in an article referenced in the Unist’ot’en Camp’s website, “All settlers do not benefit equally from the settler-colonial state… anti-oppression solidarity between settler communities is necessary for decolonization.”

As socialists and working class people, we must fight to end imperialism and colonization because it is just, because it is how we can stand in solidarity with our Indigenous allies, because it is in our best interest, because it will lead to a better world, and because, as Lenin writes, imperialism is “the highest stage of capitalism.” While it is disingenuous to talk about Indigenous struggle and workers’ struggle as having entirely the same aims, we cannot have socialism without decolonization, nor, practically speaking, vice versa. Thus, an act of strategic anti-oppression solidarity, rather than simply reacting to these blockades, is necessary. Workers’ organizations such as the Teamsters Union, which represents the rail workers and has the power to shut down key sectors of industry in Canada, should throw their weight behind the blockades, calling for Indigenous self-determination as well as an end to layoffs through strike action. Joining these two interlinked, though distinct, fights would make both fights stronger.

This struggle is not limited to Canada, of course. Pipelines are being built on Indigenous land like the Standing Rock Reservation and through the heart of working class neighborhoods like Bushwick and Greenpoint in New York City (which are also, not incidentally, built on Indigenous land). These pipeline projects are being supported and financed by some of the world’s largest banks and investment firms.  And we don’t have to imagine the dire consequences of the construction of the pipeline. We can simply look at the existing Keystone XL pipeline, which has already leaked 383,000 gallons of oil, as Indigenous water protectors warned it would. When we look at the enemies of the Wet’suwet’en, we realize they are the enemies of all workers. Indigenous people have long protected both stolen and unceded land from exploitation, and non-Indigenous workers must join in the fight to defeat our common enemies.