The graduate students of the University of California, Santa Cruz are teaching an end-of-semester lesson on the art of the wild-cat strike by fighting the boss and the union bureaucracy. Not a grade will be submitted until the university submits to giving the graduate students what they deserve. 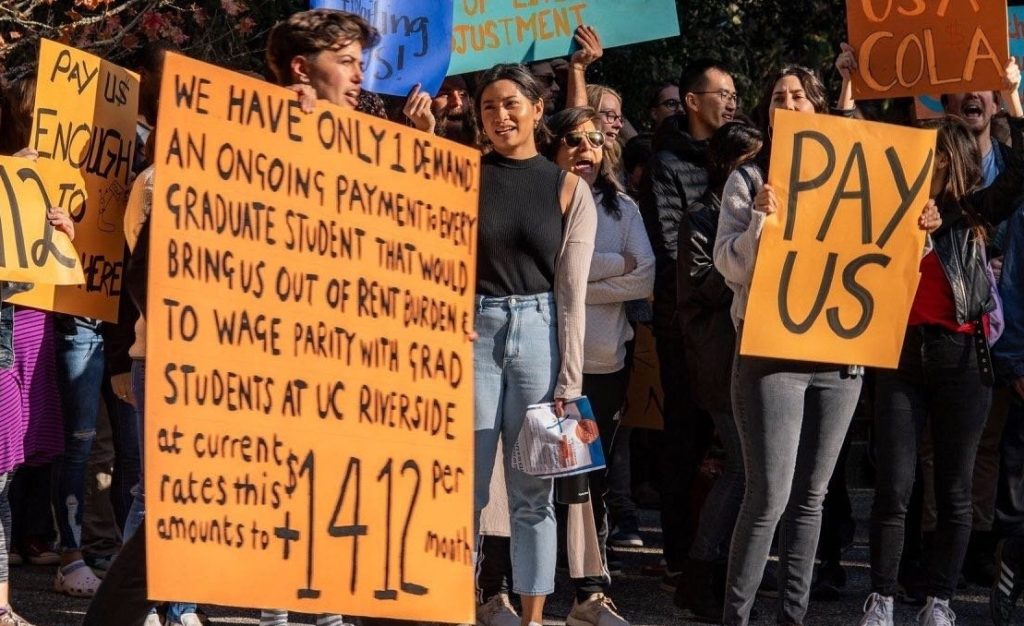 On Sunday, December 8, more than 400 graduate workers at the University of California, Santa Cruz pledged to withhold final grades until their demand for a cost of living increase is met by the UCSC administration. This wildcat strike, which was called without approval of the official UAW 2865 union, comes just five days after graduate workers at Harvard University (also organized by UAW) walked off the job. Both strikes mark a shift in the militancy of graduate worker organizing, which has become an increasingly volatile site of struggle within the larger labor movement. But the UCSC strike is a particularly interesting test case, because it is the first action to really challenge the UAW’s strategy of performative graduate worker strikes.

Although the UAW has done a fine job of organizing graduate workers at both public and private universities across the country and has called several strikes within this sector in the last couple of years, these strikes have been tightly managed by UAW organizers and have almost always included a predetermined end date, thus making them little more than acts of mostly symbolic protest. Such pressure tactics can, of course, be an important part of any union struggle, however the UAW has several times called off such strikes despite the desire of the rank and file to keep fighting. At Columbia University, for instance, the UAW called off two end-of-semester strikes that could have shut down the university and massively disrupted graduation if they had withheld grades as the UCSC students are doing now. Such actions would have sent a clear signal to the Columbia administration that there would be real consequences for inaction.

But UC Santa Cruz is not Columbia University. Long regarded as one of the most radical of the UC campuses it is not surprising that the graduate workers there have rejected the UAW model of union activism and drawn the conclusion that their power flows from their self-organization and not the union bureaucracy. Indeed, the UAW unit at UCSC has been a hotbed of rank and file resistance since at least the last contract. In 2018 union members at UCSC sent a resounding message to their union leadership when 83% of the union members voted no on the proposed contract, which they argued did too little to alleviate the unbearable rent burden of living in a city like Santa Cruz which has some of the highest rents in the state. Since then rank and file union members have developed a proposal for a cost of living adjustment (COLA) and have taken the campaign directly to the Santa Cruz administration.

In November, graduate workers presented their demands to the president of the college, which included a $1,400 per month increase for all graduate students regardless of immigration or work status. This increase was meant to cover the difference between what it costs to rent a room in a three bedroom apartment in Santa Cruz compared to Riverside California, where UAW 2865 graduate workers receive the same wages. As several searches for rooms for rent in Santa Cruz demonstrate, rooms regularly run as high as $2,300! Indeed, conditions are so bad that many UCSC students have been reduced to periodically or permanently living in their cars and have faced police harassment as well as outrageous fines of $300, since sleeping outside is illegal in the County of Santa Cruz. This request was followed by demonstrations and speak-outs that were ignored by the administration.

On December 6th, activists circulated a straw poll among more than 450 graduate workers, to which more than 85% said they supported going on strike. Shortly after, on Sunday, December 8, a general assembly of 250 graduate workers was held in which it was decided that final grades would be indefinitely withheld until the administration agreed to the graduate workers’ demands. Since then the administration has continued to inform graduate students that withholding grades is a violation of the contract and have thus far refused to negotiate with the union or union activists.

The UCSC faculty however, have largely come out in support of the strike. In fact, as of publication, 433 faculty members at the college have signed onto a petition supporting COLA increases for graduate students; and the Santa Cruz Faculty Association, which represents tenured and tenure track faculty at the college, has issued a statement urging faculty not to perform the work normally performed by graduate teaching assistants (TAs) and not to submit grades that are being withheld by TAs. “We have attorneys on our side to ensure that faculty who decline to volunteer to take up struck work are protected to the maximum extent that the law provides,” the statement said.

As the strike enters its second week and the deadline for grade submissions approaches, union members are confident that most TAs will not submit their grades and that the administration will eventually be forced to the table. Although there is still some uncertainty about what the administration may offer, activists have formally stated that “any good-faith offer which could plausibly end the strike will be put to all graduate students for a vote by straw poll, in the exact same way that the strike authorization was conducted.” Despite this uncertainty, graduate workers are excited about the long-term potential of the strike. As UCSC PhD Candidate James Sirigotis said: “we are beginning to get the sense that we have started something bigger than we had imagined – the outpouring of support from other UC campuses, unions, and political groups from around the world fuels our passion and validates our demands.”

While these grade strikes, which are quickly growing into a university-wide movement, are a rebuke of the failed UAW model of non-disruptive strikes, they also mark a turning point in the militancy of graduate worker organizing. Like workers everywhere the labor of graduate workers produces real value for the universities and colleges where they are employed. Though they are also students, their labor has been used and exploited, just like adjunct faculty, in order to cover decades of state and federal budget shortfalls. By fighting back, graduate workers are not only taking a stand for themselves but for the future of public colleges and universities everywhere. As the pressures upon students, graduate students and faculty increase, it is clear that workers like those at UCSC could be on the verge of a strike wave that could radically reshape higher education.