During the first few days of the Derek Chauvin murder trial, we’ve learned that the “crime” George Floyd was accused of could have been handled with a ticket under standard policing protocol, and that the cops refused to let a trained EMT save Floyd’s life. No wonder: taking the lives of Black men is standard operating procedure for police departments across the country. 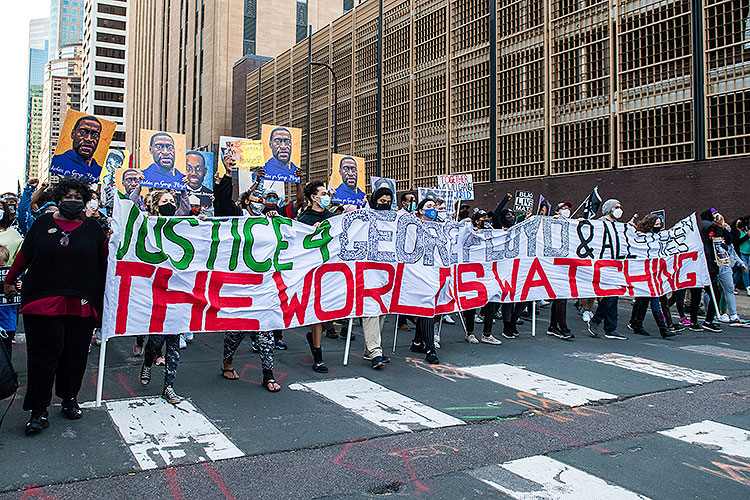 The trial against Minneapolis cop Derek Chauvin opened on Monday, and over the course of its first three days witness after witness testified to the brutality of the killing of George Floyd, the callousness of the police officers involved, and their own anger, sadness, and even trauma. Their testimony also made clear that Floyd’s life was taken over what could have been handled by issuing a ticket.

One of the key takeaways from the initial days of testimony in the murder trial of Derek Chauvin is that the Minneapolis Police Department has made clear the value of a Black man’s life in that city: $20.00.

Christopher Martin, the Cup Foods cashier who sold cigarettes to George Floyd not long before Derek Chauvin murdered him out on the street, was suspicious of the $20 bill Floyd handed him. He flagged a manager. The rest is history.

Martin wasn’t even certain that the bill was counterfeit. He regrets having said anything about it, but also noted that the store management deducts money from employee paychecks for taking phony currency. He thought about paying for Floyd’s purchase himself, even offering to do so to the manager, but instead the cops were called.

The defense keeps implying that using a phony $20 bill actually matters in whether Chauvin murdered Floyd. Notably, since the trial began, numerous experts on police department use of force have told various news outlets that such an “offense” didn’t even require an arrest — and certainly not the killing of a suspect. As the Associated Press wrote in an “explainer,” “The charge of trying to use a counterfeit bill would have been a simple misdemeanor under Minnesota law, and in many cases that can be handled with a ticket, said Mylan Masson, who once headed police training at Hennepin Technical College and served on the Minnesota Police Officers Standards and Training Board for more than 20 years.”

And in one of the great understatements of all time, a University of Miami sociologist who researches police departments told the AP, “This is not the way you want to handle someone who is supposedly trying to pass a counterfeit bill.”

Another key takeaway is that the Minneapolis cops expect other “first responders” to know their place. Off-duty firefighter and trained EMT Genevieve Hansen happened by the killing scene. She cried as she told the jury all the different ways she tried to convince the four cops to let her help Floyd, who was being killed. “I was desperate to help and wasn’t getting to do what I needed to do,” she said.

She testified that Tou Thao, one of the cops who was there with Chauvin, told her: “If you really are a Minneapolis firefighter then you know better than to get involved.” In other words, Thao enlisted her to stay on his side of the “thin blue line” that lets cops get away with murder. Sure, cops and firefighters may both be “first responders,” but only the latter actually protect and serve their communities as the main part of their jobs. The police — as they make clear every day across the country — are decidedly serving other interests.

Others who’ve taken the stand have expressed their horror and outrage at what the cops did. Yesterday, a witness to the killing began to weep as body camera footage was shown to the jury. Charles McMillian, a self-described “nosy person,” had been driving by, but stopped his car and tried to persuade Floyd to go with the officers because he was sure they would otherwise harm him. As Floyd’s lifeless body was later being put on an ambulance, he confronted Chauvin to tell him his method of restraint had been unnecessary.

Chauvin had an answer, testified McMillian. He said, “That’s one person’s opinion. We had to control this guy because he’s a sizable guy. It looks like he’s probably on something.”

It wasn’t McMillian’s first encounter with Chauvin. He testified that five days earlier he had seen Chauvin and told him something he said he repeats to cops in the community regularly: that at the end of the day they get to go home, but others in the community may not.

All told, six bystanders testified on Tuesday. A high school student told how she felt threatened. A 9-year-old girl expressed her anger and sadness at Chauvin “hurting” Floyd. Mixed martial arts fighter Donald Wynn Williams II said he was so disturbed by what he was seeing that he called 911. “I called the police on the police. I believe I witnessed a murder.”

The cross-examination by Chauvin’s defense lawyers reveal what everyone expected: that they are going to try to turn the proceedings around and put George Floyd on trial. They keep bringing up that he appeared to be high. They are certain to push toxicology reports in an effort to establish that he died because of what was in his system, or from some preexisting condition. Their objective isn’t just to get Chauvin out from under a murder charge, but to reinforce that cops can kill people of color with impunity in this country.

Hunting down enslaved people is how police departments largely started in this country. Cops killing people whose lives are valued at $20 isn’t much different than that origin story.