Work in the Time of Coronavirus: My Job is Closed, But My Rent is Due

An assistant server at an Upper East Side restaurant is only barely able to scrape together her April rent. As NYC extends its “Pause” through the end of the month, the approaching May 1 bill casts a dark shadow for workers still unable to make a living but provided with no relief. 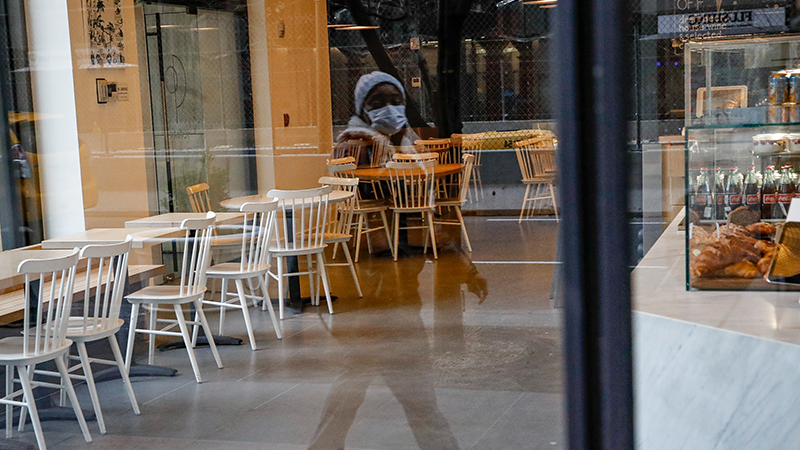 “I know this hasn’t been easy, but I want to thank you all for how well you’ve adjusted to everything that’s been going on recently,” my manager said on March 14 as we had our regular pre-shift meeting.

It was a Saturday night, usually one of our busiest nights of the week at the restaurant, but now we were only serving about a third of our normal numbers. COVID-19 had started to go from being a joke when someone coughed to being a real cause for concern. At this point, the restaurant was only allowed to seat half its capacity, and the seated tables had to be six feet apart. I told my manager at the meeting, “I think we’re all just happy we still have a job.”

Rumors of the virus had already caused many of our usual UES customers to stay home, which meant fewer hours and fewer tips for the employees. I was especially worried about my upcoming paycheck, because I had just started training for a higher position at the restaurant, and during your training hours you’re only paid minimum wage and don’t get a share of the tip pool. Every day, we would hear about another business that had shut down until further notice. Broadway had just closed, which meant many of my friends no longer had jobs. I had asked our head chef earlier that week if he thought there was any chance the restaurant would close. “Absolutely not,” he said, “we want people to think of this place as a constant in their lives. If we close they’ll take their business somewhere else, and we don’t want that”

Around 12:00 that night, after I had gotten home from my pretty much uneventful shift, I got the email: the restaurant would be closed until future notice. We would receive a small stipend for the following week to make up for any hours already scheduled. It’s more than some people got after they lost their jobs, but my heart sank.

I knew I would have enough to make rent for the next month, but only if I did not spend any money at all for the next two weeks. The only reason I was even worried about catching the virus was because if I did, then I would not be able to go to work.

I called my parents, and within 24 hours my father had driven up to New York to pick me up and take me back to North Carolina until this pandemic blows over. I understand that this is not an option for many of my coworkers. While I’m thankful for this time that I have to spend with family, I’m scared. What happens after next month if my restaurant doesn’t open back up and May’s rent is due? I had worked so hard to get to where I was, and it felt like everything was crashing down around me.

I’m scared, but I’m also angry. I’m angry at our government for not taking this seriously until it was almost too late. I’m angry that our system does not protect people when situations like this occur. I’m angry about the fact my and many other people’s priorities had to be based on getting to work and making money instead of staying in and helping slow the spread of the virus. I’m angry that almost everyone I know has been laid off until further notice. I am angry at politicians for thinking about themselves and their stocks rather than addressing the impending crisis. I’m angry that despite this, there still is not a rent freeze in the state of New York.

I want to stay positive in spite of my fear and anger. However, I refuse to be complacent with how our society is being forced to function despite the fact that many of us can no longer pay our bills. I want to do what I can to help make things better.

The thing is, though, that it should not fall on me or any of us to be the ones who make things happen. There has always been a need for a drastic change in our workforce and our way of life. It should never have taken a pandemic for people to realize this.