Workers’ Control of Production is the “Emergency Measure” We Need

There’s only one way to ensure that all the different emergency measures being enacted to combat the coronavirus pandemic serve the interests of the working class and not the capitalists, whose primary motivation is to rescue their corrupt, inhumane economic system: workers’ control. 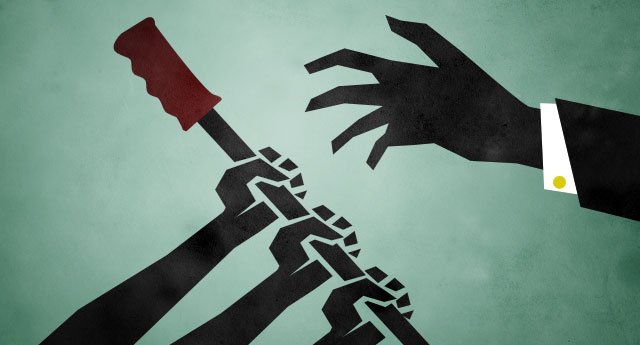 The man-child president who spent weeks telling people in the United States that the coronavirus was nothing to worry about, that it was a hoax or a plot by the news media to undermine his presidency, and who looked right into the TV cameras on multiple occasions and lied about the number of cases and the availability of tests, claimed on March 17, “I felt it was a pandemic long before it was called a pandemic.” Now Donald Trump, whose father bought him a doctor’s diagnosis to avoid military service during the Vietnam War, who claimed to know more about military strategy than generals, and who tried to have a giant parade in his honor with tanks and missiles on flat-bed trucks, gets a wish granted. He gets to call himself a “wartime president.”

This came as part of his announcement that he was invoking the 1950 Defense Production Act, established to allow the government to shift factory output to war needs during the Korean War. It was a codification of what the U.S. government did during World War II, when it sent women into idle factories — male workers had been largely sent to Europe or the Pacific to fight —  to make airplanes, guns, ammunition, and other military needs.

Trump’s executive order states that the government will use the act to obtain “health and medical resources needed to respond to the spread of COVID-19, including personal protective equipment and ventilators.”

If this makes you think the U.S. government is nationalizing factories as part of the response to fighting the virus, think again. Just as with “regular” war, there’s plenty of profit to be made by the capitalists.

Under Capitalism, All War Means Profit

The Defense Production Act (DPA) has three main sections. In the “Priorities and Allocations” section, the DPA gives the president authority to require corporations to accept and prioritize contracts for services and materials deemed necessary. The “Expansion of Productive Capacity and Supply” section allows the president to create incentives for industry to produce critical materials. The “General Provisions” establish government authority to come to agreements with private industry and to create a volunteer group of industry executives who could be called to government service.

Let’s put those all together. Other than stipulating what factories produce — perhaps that GM plant near you is going to start making ventilators — this is pretty much business as usual. The government will issue contracts — that is, they’ll use our tax dollars to pay for the goods produced. Those contracts will have incentives for cooperation and participation in the production of whatever the government deems necessary. And a group of leading capitalists will be sitting at the table, making the decisions.

What could go wrong? It’s not like factory owners will be making some kind of national sacrifice. Lest you think this is some kind of nationalization, their ownership and profit making are ensured. They’ll be able to keep some workers employed, but you can bet that they’ll be petitioning the government for further stipulations allowing them to lower wages, benefits, and other protections. After all, this is a national emergency — and the DPA also authorizes the president to impose wage controls and settle labor disputes. Which side do you think Trump will come down on in a confrontation between workers and the bosses? If the bars were open, there could be a new drinking game: take a shot every time one of Trump’s cronies gets a government DPA contract.

So, while we definitely need to be on a “war footing,” nationalizing all healthcare and the production efforts needed to ensure we have the supplies and capacity we need at this dire time, this needs to be done under democratic control by the working class. This executive order is not that!

On March 18, the New York Times reported that the federal government had shown its reporters a 100-page plan that lays out “a grim prognosis” for a pandemic that “will last 18 months or longer” coming in  “multiple waves.” It predicts widespread shortages that will strain consumers and the U.S. healthcare system. In addition to the shortages of medical equipment the DPA declaration is aimed at addressing, it draws attention to “impacts to lifelines at state/local levels,” including food, fuel, transportation, and so on.

It is the first official U.S. government document to paint so stark a picture of what is on tap.

The plan also says, “State and local governments, as well as critical infrastructure and communications channels, will be stressed and potentially less reliable. These stresses may also increase the challenges of getting updated messages and coordinating guidance to these jurisdictions directly.”

In other words, the government is projecting that even the channel on which you’re reading this article, on Facebook or the web, may become unavailable or severely compromised, along with radio, TV, phone systems, and all the other ways we stay in touch and get the information we need.

Marxists call for the nationalization of industries because this step aims at organizing and rationalizing production in the interests of societal good and not for the purpose of making a profit. Public ownership of essential services — healthcare, education, and public transit, for instance — are particularly important because access to such services is critical to human life and should not be governed by market forces.

In a life-and-death crisis, nationalization takes on a new meaning and urgency. We need what Trump’s invocation of the DPA aims to deliver — much-needed medical materials that are in short supply — but there is nothing to be gained by the working class in the capitalist approach, which is centered on ensuring that workers’ labor can still be exploited to make money for the bosses. What changes our situation is not what we produce, but how that work is organized.

Yes to radical measures to fight the virus, but working people must hold the reins.