The AMNH will host a gala organized by the Brazilian-American Chamber of Commerce that invited the right wing president of Brazil, Jail Bolsonaro. Workers are demanding that the event be cancelled. 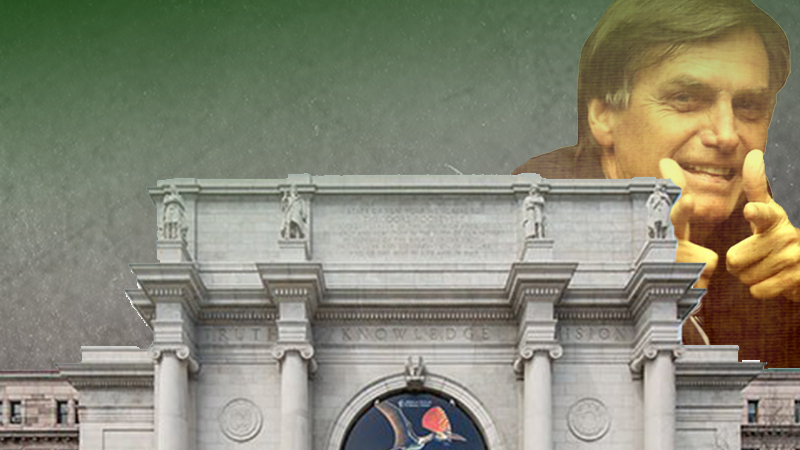 I work at the American Museum of Natural History and I am appalled that my workplace would host a party for Bolsonaro—a fascist, homophobic, racist and misogynist politician.  But I can’t say I’m surprised. After all, the Museum has a David H. Koch Wing of Dinosaurs, Rebekah Mercer sits on the Museum’s Board of Trustees, and I go to work every day in the Sackler Institute of Comparative Genomics, a laboratory wing built with Oxycontin money.

Upon taking office Bolsonaro embarked on a genocidal course of action against the indigenous peoples of Brazil by opening up the Amazon for development by mining and agribusinesses.  So why is the American Museum of Natural History, my workplace, hosting a $30,000-a-plate Gala in his honor?

The American Museum of Natural History built its wealth and power on the backs of indigenous and colonized people around the globe.  Its halls are filled with treasures looted in the 19th and early 20th centuries; the Museum’s recent efforts to recontextualize its racism with a little extra explanatory text is a mere figleaf on 150 years of racism and colonialism.  The museum hosted conferences of eugenicists in the 1920s and 1930s, once displayed the skeleton of a kidnapped Inuit man in its halls against the protest of the man’s child, and to this day defends holding looted objects on the grounds that countries plundered by Western colonial masters cannot keep these treasures safe.

The Museum claims to support conservation, claims to support scientists studying biodiversity and climate change out of one side of its mouth, while taking the money of capitalists who want to bulldoze the world’s natural resources on the other.  The museum tries to rehabilitate its image through minimal improvements to anthropological exhibits while taking the money of genocidal capitalists who will force Indigenous peoples of Brazil onto reservations in order to steal their land.

So I am not surprised that the American Museum of Natural History would take capitalists’ money to celebrate a fascist.  But I will tell you what I, and my fellow workers, plan to do about it: we plan to protest as loudly and for as long as it takes until the Museum cancels this event.  We ask that the people of New York City stand up to defend us as we fight to push Bolsonaro OUT of the American Museum of Natural History!