20 Points: The Workers Left Front in Argentina Presents its Platform

Four socialist organizations in Argentina have created a new alliance. They agreed on these 20 points as their program, concluding with the demand for a workers’ government and international socialism 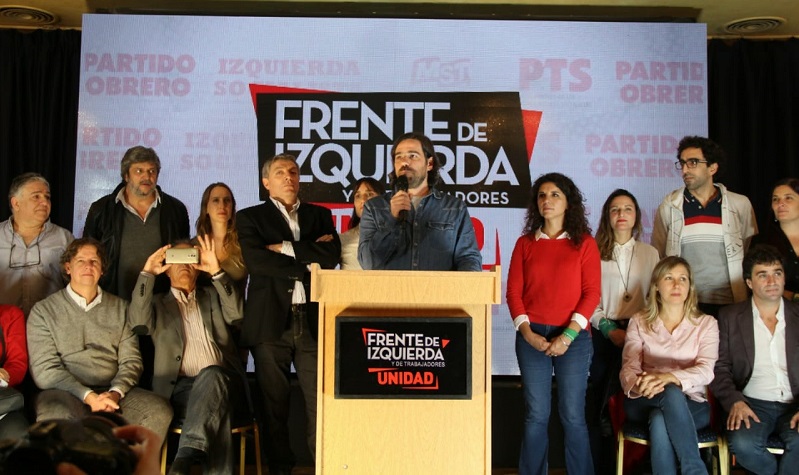 On June 12, four left organizations in Argentina announced the creation of a new alliance: the Workers Left Front—Unity (FIT-Unidad). Three of the founding groups—the Party of Socialist Workers (PTS), the Workers Party (PO) and the Socialist Left (IS)—had since 2011 been part of the Workers Left Front (FIT), which has received up to 1.2 million votes and currently has 40 elected representatives at the national, provincial and communal level. The three organizations that make up the FIT have now entered into an agreement with the Socialist Workers Movement (MST) to form FIT-Unidad, which will present joint candidate lists for the upcoming national elections in October 2019. Together as FIT-Unidad, these organizations have presented a programmatic manifesto consisting of an introduction and 20 points. Below, the introduction has been highly condensed for an English-speaking audience. The 20 points, in contrast, have been translated as close as possible to the original.

This new front, which unites virtually all the forces of the left in Argentina, has been created in the context of a major economic crisis. The capitalists are trying to make the workers and the poor masses pay for the country’s economic crisis. The right-wing government of President Mauricio Macri is servicing the foreign debt, and it has agreed to implement numerous austerity measures as required by the International Monetary Fund (IMF).

Argentina’s trade union bureaucracies have been negotiating with the government on the austerity measures. The center-left bloc associated with former President Cristina Kirchner, which has formed the “Patriotic Front,” has nominated Alberto Fernández as its presidential candidate. The Patriotic Front claims to oppose austerity and the IMF. But in reality, provincial governors aligned with this front are central to implementing austerity. The Kirchners formed agreements with the Paris Club to pay the fraudulent foreign debt, and also with Chevron to exploit gas fields in Argentina.

Working people shouldn’t have to decide between a “lesser evil” and a “greater evil.” The alternative is the one proposed by the Workers’ Left Front: that the capitalists, bankers, big land owners and imperialism pay the costs of the crisis. The FIT fights for the political independence of the working class and rejects any support for the bosses’ politicians, even the so-called progressive ones.

The FIT and the MST have had serious programmatic differences. Now, with the catastrophe facing working people, they have begun a common experience.

The FIT-Unidad calls for struggles and mobilizations to implement a workers’ solution to the crisis. This means throwing out the IMF and completely reorganizing Argentina’s economy.

The FIT-Unidad presents the following points to the workers, students and poor masses as the basis for a plan of struggle to defeat the IMF, Macri and the governors. The goal is to install a workers’ government.

1. Break with the IMF. No more payment of the foreign debt. Money for wages, jobs, health care, education and housing, not for the IMF. Nationalize the banks and foreign trade to prevent capital flight, protect small savers and provide cheap credit. For a workers’ government that implements an economic plan for the workers and poor masses, a plan that is debated and managed by the workers themselves.

2. Immediate increase in wages and pensions. Nobody should earn less than what is necessary to feed a family. For automatic pay raises and pension increases indexed to the rate of inflation.

3. Prohibit layoffs. Expropriation and nationalization of all companies that close; such companies can then resume production under workers’ control. No more precarious jobs and working off the books. All workers must get permanent contracts. Jobs for all, distribute all hours among employed and unemployed workers with no loss of salary. Down with the labor reform that legalizes outsourcing.

4. Annul the pension reform. For pensions equivalent 82% of salaries, indexed to the rate of inflation, with a minimum pension that covers retirees’ basic needs. Restitution of employer contributions reduced by Macri, [former President Carlos] Menem and Kirchner.

5. Eliminate the value-added tax on the basic goods that families depend on. Abolish income taxes. Progressive taxes on all big fortunes. Levy extraordinary taxes on major capitalists (bankers, land owners and big business owners) to resolve the most urgent needs of working people. Establish committees to control prices and guarantee the supply of basic goods.

6. Annul price increases of public services. Renationalize all privatized companies without compensation, under the control, administration and management of workers and customers. Renationalization of all railroad and subway lines (transportation and cargo) under workers’ and users’ control, administration and management at all levels. Renationalization without compensation of the oil industry and all oil companies: For a single national state-owned company under control and management of its workers. For a national energy plan controlled by workers that delivers natural gas and electricity to all homes.

7. Expropriate the landowning oligarchy, as well as grain, oil, dairy and refrigeration monopolies. Expropriate the 4,000 main landowners, respecting the rights of poor farmers, native peoples and small ranchers. No to the expulsion of farmers and natives peoples from their lands. No off-the-books jobs for rural workers.

8. Down with the mega-mining industry. Barrick and Chevron out of Argentina. No to fracking. Expropriate these companies, almost all of them imperialists, without compensation and with reparations for the damage they have caused, guaranteeing employment with equal pay for workers of these companies.

9. For national, single, public, free and secular education. No more subsides to private education. Churches out of education. Real and effective separation between church and state.

10. Establish a high-quality, national public health care system managed by the state. Free and integral state health care. Nationalization without compensation of pharmaceutical labs that profit off the people’s health. Free medicines to all who need them. Democratic control of insurance systems by workers’ committees elected by the rank-and-file so they stop serving as a bank used by union bureaucrats to enrich themselves [since many insurance systems in Argentina are run by unions].

12. For the right to free, legal and safe abortion. Sexual education to decide, contraceptives to prevent abortions, legal abortion to prevent deaths. Money to combat gender violence, not for the IMF. Rights for working-class women. Equal pay for equal work.

13. Down with police violence. No to the reduction of the age of criminal responsibility! Down with the reactionary and repressive reforms to the penal code. No police spying and infiltration in people’s organizations. Dissolution of secret services that spy on workers and poor people. Annulment of the “anti-terrorism” law. Annulment of court cases against more than 6,000 workers and activists. Freedom to all political prisoners.

Punishment of those responsible for the murders of Santiago Maldonado [an activist murdered in 2017] and Rafael Nahuel [an indigenous activist murdered in 2017]. Jail for those responsible for the disappearances of Julio López [a witness to the persecutions by the dictatorship, disappeared in 2006] and of Luciano Arruga [a teenager who disappeared after he was arrested in 2009]. Jail for the murderers of Carlos Fuentealba [a teacher murdered by police in 2007]. Gendarmerie out of working-class neighborhoods!

14. Life in prison for the genocidal military dictators, their civilian accomplices and those responsible for the crimes of the Triple A [fascist death squads that murdered hundreds of activists in the 1970s].

15. All legislators, public officials and judges should earn no more than a skilled worker or a teacher. All positions must be subject to recall by the voters.

16. Election of prosecutors and judges, subject to recall. Elimination of all caste privileges. Trials by jury.

17. Bureaucracy out of the unions. Support for combative unionism. Independence of the unions from the state and the government. Full union democracy and the right of workers to organize with no interference or control by the state. For combative and anti-bureaucratic leaderships in the unions, based on class struggle and union democracy. We support the self-organization of workers against the control imposed by the union bureaucracy and the bosses’ parties.

18. For the defeat of the agreement between Macri and the IMF, and with the governors who implement it. For a Free and Sovereign Constituent Assembly that discusses and decides emergency measures necessary to satisfy the most urgent needs of the working-class population and push for a transformation of the whole country on a new social basis.

19. For a government of the workers and the poor masses, installed by mobilizations of the exploited and oppressed.

20. Down with the coup attempt in Venezuela organized directly by U.S. imperialism and its puppets in the Organization of American States, without giving any support to President Nicolás Maduro’s government. U.K. and NATO out of the Islas Malvinas [known to imperialism as the Falkland Islands]. No to the economic blockade and any kind of imperialist aggression against Cuba. Support for the heroic Palestinian people. Down with the Zionist occupation of Palestine.

We support the struggle of the international working class against imperialist capitalism and its governments. We salute the popular rebellion in Algeria and the struggle of the Yellow Vests in France, and we defend the right of self-determination of the people of Catalonia.

For an international policy of support for popular and working-class rebellions all over the world, for the expulsion of imperialism from all countries, for the socialist unity of Latin America, for international socialism.

First published in Spanish on June 12 in La Izquierda Diario.

Translation and condensation by Nathaniel Flakin