5 Times the U.S. Intervened in Iran

Before the recent airstrike attack on Iran, the United States had extended its imperialist arm in Iran during several key moments in history. Here is a brief review of US involvement in Iran. 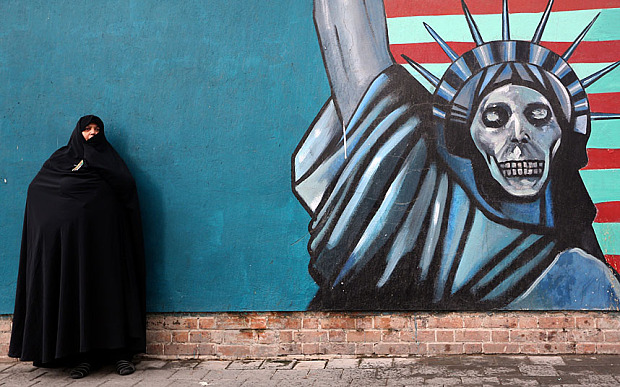 Friday’s airstrike attack near Baghdad International Airport — authorized by President Donald Trump and resulting in the death of Iran’s top military commander, Qasem Soleimani — has escalated what were already high tensions between Iran and the United States. The relationship between the U.S. and Iran has long been one of contention and violence. To understand this history, we must begin with the 1953 coup organized by the CIA, which ousted democratically elected Prime Minister Mohammad Mosaddegh and instated the Shah Mohammad Reza Pahlavi, a pro-U.S. dictator, as leader of Iran.

In 1951, Mohammad Mossaddegh was appointed Prime Minister of Iran with broad public support. One of Mossaddegh’s first major acts was to nationalize Iran’s oil reserves, which had been under British control through the Anglo-Iranian Oil Company (now part of BP) for the previous 50 years, and to expel foreign corporate interests. While Mossadegh was not a communist, he did have the support of the Communist Party. The British, angered by the loss of their foreign interests, played on the McCarthy-era fears of communism in the United States to convince the Eisenhower Administration to undertake Operation Ajax, a plan engineered to oust Mossadegh. By August of 1953, Mossadegh had been deposed by the CIA; the Shah, whose influence had been weakened under Prime Minister Mossadegh, took power once again. Under the leadership of the Shah, Iran was thrust into a vicious dictatorship during which Iranians were subject to torture and imprisonment by the secret police, known as SAVAK, who were trained and funded by the CIA. The Shah’s brutal 26 year rule would ultimately lead to the Islamic Revolution of 1979.

Under the Shah, Iran experienced what was referred to as a “white revolution” to modernize and westernize the country. However, the U.S.-backed Shah ultimately served the elites and the poor masses suffered desperately under his rule. By the end of the 1970’s, Iran was experiencing a wave of anti-government protests which were met with severe repression. The Shah declared martial law, leading to a general strike and shut down of the Iranian economy. During the revolution, the Shah was forced to flee Iran and escaped to the United States, allegedly to seek medical attention. From November 4, 1979, to January 20, 1981 — 444 days in total — a group of Iranian college students took 52 American diplomats and civilians hostage in the US Embassy to attack US Imperialism. The students’ demands for safe release of the hostages included: 1) Return the Shah to Iran for trial,  2) Release Iran’s frozen assets in the US to the people of Iran, 3) A promise of no more US interference in Iran, and 4) An apology from the US over previous interference in Iran, specifically the 1953 coup.

During the revolution, many theocratic Islamists grew in popularity for their shared anti-American and anti-imperialist sentiment. Ayatollah Khomeni, one of Iran’s religious leaders, who under the Shah had been forced into a 14-year exile for speaking out against the Shah’s secularization of Iran, was heralded upon his return to Iran. He would ultimately seize power and institute his regime in 1979, thus officially establishing the theocratic Islamic Republic of Iran. While the revolution began as one with a broad-based anti-imperialist and anti-dictator sentiment, it was usurped by reactionary clerics who repressed leftist revolutionaries and instituted a theocratic authoritarian state.

Involvement in the Iran-Iraq War and Downing of Flight 655

In 1980, Iraq, under the leadership of Saddam Hussein, lead an attack on Iran, beginning the 8 year war between the two nations. Iraq wanted to annex the oil-rich Khuzestan Province on the western border of Iran. The Iran-Iraq war was one of the deadliest and most brutal wars of the 20th century. Nearly half a million Iranians were killed. True to its imperialist nature, the United States played both sides of the conflict, ensuring regional imbalance so that neither nation would gain the upper hand. In doing so, the US maintained its stronghold in the region, cementing resentment among Iranians toward the United States. The US supported Iraq by providing money, weapons, and intelligence. Furthermore, the U.S., as well as its allies, assisted the Iraqi Army with the development of chemical weapons which were used extensively against Iran. The US also provided Iran with arms, despite having an embargo against the region, in what would be known as the Iran Contra Affair. One of the more tragic and contentious moments of the US’s involvement took place towards the end of the Iran-Iraq war when the USS Vincennes, a guided missile cruiser, shot down Iran Air Flight 655, a civilian flight traveling from Bandar Abbas, Iran to Dubai, UAE. The shooting took place over the Strait of Hormuz and resulted in the deaths of all 290 passengers. Notably, the Strait of Hormuz is an incredibly strategic location for international trade because it provides the only sea passage from the Persian Gulf to the open ocean. A third of the world’s liquefied natural gas and almost 25% of total global oil consumption passes through it. Despite being found guilty in 1996 by the International Court of Justice and ordered to pay a settlement of $130 million, the US did not pay until President Obama took office and never formally apologized for the appalling incident.

The United States’ involvement in Iran has not been solely one of regime change coups and military interventions, but also one of economic intervention in the form of trade sanctions and embargoes. Immediately following the start of the hostage crisis in the US Embassy of Iran, President Jimmy Carter signed Executive Order 12170 into action, which froze Iranian assets, in an effort to put pressure on the hostage takers to release the Americans hostages. These were the first sanctions mounted against Iran by the United States. While they ultimately did nothing to ease diplomatic tensions during the hostage crisis, they set a precedent of political stalemates between the two nations which, in the years following, would often result in the issuance of sanctions and embargoes rather than direct political negotiations. Two hundred and twelve days into the hostage crisis, Carter went even further by cutting off all US-Iranian diplomatic relations and ended all food aid to Iran. Although the United States agreed to revoke sanctions after the release of the hostages, only some were rolled back.

Under the Reagan administration, which coincided with the Iran-Iraq War, Iran was designated a state sponsor of terrorism, giving Reagan the sway to install further sanctions. However, despite maintaining a strong public stance in support of the sanctions, Reagan clandestinely sold arms to Iran without the approval of Congress in 1986, in what would later become known as the Iran Contra Affair, in order to fund the anti-communist Contra group in Nicaragua, which was fighting the Sandanista government.

The Clinton Administration was marked by some of the toughest sanctions against Iran. In 1995, President Clinton prohibited US trade in Iran’s oil industry and, later, any US trade with Iran. The most recent sanctions against Iran, under current President Donald Trump, have lead to a severe economic crisis for the people of Iran,  resulting in the eruption of wide-spread anti-government protests, sparked initially by a hike in fuel prices. These protests were met with violent repression by the Iranian government. Decades of sanctions on Iran by a global superpower like the United States have destabilized the country’s economy, continually placing the masses of Iran on a precarious economic footing. These sanctions, notably, have taken place under both Democrat and Republican governments. Trump announced new sanctions against Iran during his press conference last Wednesday.

The Iran deal, also known as the Joint Comprehensive Plan of Action (JCPOA), was orchestrated by the Obama Administration in 2015 after years of tension over Iran’s alleged attempts to develop a nuclear weapons program. The deal was signed by a group of world powers known as the P5+1 (the United States, UK, France, China, Russia, and Germany). Iranian negotiators agreed to restrictions that would allow Iran to continue to maintain the country’s energy needs through enriched uranium, but would limit their nuclear activities, in exchange for lifting economic sanctions that had been imposed on Iran.

Inspectors declared that Iran was fulfilling its obligations to the deal in 2016, and consequently, all nuclear-related international sanctions were lifted against Iran. Soon after, Iran began shipping oil to Europe for the first time in three years. With oil making up 80 percent of Iran’s exports, Iran’s economy received a big boost from the nuclear deal up to that point.

The Trump administration controversially called for a withdrawal from the deal after Trump was elected in 2016. Trump, with pressure from key U.S. allies in the region, like Israel and Saudi Arabia, argued the deal didn’t address Iran’s regional behavior. In 2018, the U.S. withdrew from the JCPOA and sanctions were reimposed, quickly crippling Iran’s economy and hitting working people in Iran the hardest. The unemployment rate in Iran rose to 13.8% that year and Iran’s currency, the rial, plummeted to record lows. The U.S. withdrawal from the nuclear deal set off a domino effect, with the withdrawal triggering  sanctions which, in turn, created an increasingly fragile economic situation in Iran.

The Trump administration’s move to kill Iran’s top general last week followed the existing precedent of reckless maneuvering from Trump. Days after Soleimani’s assassination, Iran responded by announcing it would no longer adhere to all provisions set forth by the nuclear deal. This recent escalation by Trump, compounded by the recent economic sanctions, are further examples of the latest in US imperialism in the region. This involvement of the United States only serves to worsen the lives of working class Iranians and threaten a war that will largely affect the most vulnerable in Iran. The only way to de-escalate in such a situation is the withdrawal of U.S. forces from the region and the removal of sanctions.