Adjuncts and other teachers are underpaid and undervalued. Thats why we will mobilize on March 8 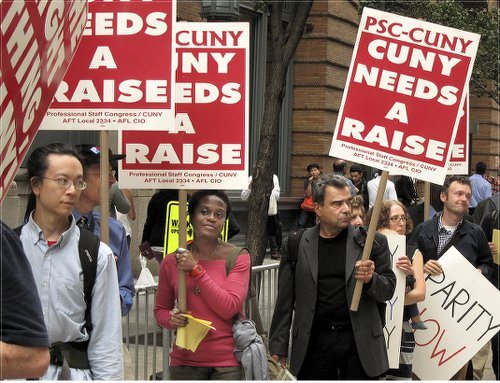 In “Living a Feminist Life,” Sarah Ahmed claims that “to become feminist is to kill other people’s joy; to get in the way of other people’s investments.” (p. 65) While suggesting a somewhat sarcastic, tongue-in-cheek tone, this line also resonates with the reality of what it is to review, resist, reject, and re-envision the structures, relationships, and histories that generate our now and our tomorrow. To become aware of our current state of affairs – and to act on this awareness, in solidarity – is to get in the way of an established way of thinking about how we define what is ethical and possible in our labor and our politics.

The International Women’s Strike, taking place this week on March 8th in demonstrations across the globe, is an example of this rising collective get-in-the-way-ness that is challenging some of our most venerated institutions and traditions. As a political strike, rather than a strike for bread and butter demands, it is asking questions that in the past have been dispersed across different groups with distinct agendas. These questions address workers’ rights, reproductive rights, immigrant rights, housing rights, even the right to mobilize ourselves, but are not limited to these areas of focus. The International Women’s Strike, writ large, is a call to action against a state of affairs that has normalized tenuous and unjust living and working conditions, a call that asks all of us to consider the ways in which our society shushes our political voice and consciousness by working us harder and harder and separating us one from another. The Strike on March 8th is, as Tithi Bhattacharya reminds us, vital to our current state of affairs because “for the first time in many, many years we are seeing questions being raised about what it means to be a worker in this country.” Bhattacharya suggests, in no uncertain terms, that it is our lived experiences as laborers, increasingly characterized by rising inequality, anxiety, and precarity, and our ability to fight back to regain our dignity and self-determination, that are at stake. We are, she claims, opening a conversation about “a wider world of better living” in the global actions on March 8th.

Such questions invoke thinking about public discourse and our national narrative. Put the phrase “U.S. worker” into Google and you get images of men in hardhats, working with large machines to produce cars, steel, buildings, roads. This reflects a default view of labor in this country which is masculinist, nationalistic, and heteropatriarchal, grounded in a narrative that locates worker rights within certain male-dominated spaces, industries, and geographies. Under such a rubric, women’s labor become ancillary, a support role, an afterthought. This doesn’t mean that women have not made great strides in labor equality, education, and political representation. Far from it. But when we think of “labor,” of “workers,” we still tend to project a very specific set of images and ideas. Other forms of work which do not conform to this narrative, and the bodies that rise to produce it, are often invisible-ized, misunderstood, devalued, denuded, depoliticized. This is the case with immigrant labor, with domestic labor, with emotional labor and other forms of un(der)compensated, unrecognized work. These work activities are usually feminized, downplayed, seen as the purview of female-bodied, Brown and Black, and/or immigrant people, yet they are in fact necessary to the successful running of the global capitalist machine. As political philosopher Nancy Fraser argues, the un-recognition and exploitation of feminized labor as an aspect of social reproduction, which perpetuates unequal social arrangements over time and space, is the “backstory” which makes capitalistic accumulation possible.

One of these subsets of feminized labor is adjunct work in higher education. Adjunct professors, lecturers, and instructors are part-time, at-will laborers who fill in the gaps created by the budget shortfalls that plague the institutions of higher education. As I stated in an article I wrote in December 2017, those of us who work in this capacity make up half of the teaching faculty in these institutions across the country, yet tend to be poorly compensated and struggle with a lack of job security as well as visibility and respect. Ironic is the fact that adjunct faculty take on important responsibilities including structuring important coursework for undergraduate and graduate students, advising and supporting these individuals, and contributing to the curricular materials and the ongoing needs of the departments where they teach. In an analog to Fraser’s discussion of how capitalistic relations require unrecognized, un(der)compensated labor to support official production activities, an argument could be made that adjunct labor is a “backstory” to the officially recognized and rewarded full-time faculty, supporting the latter’s existence by covering courses that are inconvenient and/or unstaffable at a low cost. This is, indeed, understood to be “the way things are.”

There is an affective, relational dimension to this. As adjuncts, we simply don’t “get in the way.” We are of service. Generally, we do this out of love for what we do. We are grateful to be able to support our students and our departments. But gratitude is a tricky thing. When I think about my work as an adjunct professor, I am similarly grateful to have worked with graduate students for the last three years. The majority of these individuals are public school teachers in New York City, and it brings me joy to think that my energy, my hours spent, my creativity, and my scholarship contribute directly to the health and strength of our city’s schools and the young people who attend them. So this begs the question: if I’m more often satisfied than not with this work, why would I interrogate how adjunct labor functions in the context of higher education, and dare to question on what conditions adjuncts should be working? (It should also be said that daring to do such a thing may have real consequences as to my future hireability as a full-time professor.)

I would respond to this unasked question with another question: Is it ungrateful for the teachers in West Virginia, who no doubt care deeply about their students, to be striking in demand of a pay increase and more reasonable health care premiums, an ongoing movement which is inspiring similar actions in Oklahoma and other parts of the U.S.? What about the strike by lecturers, librarians, and other workers in over 60 institutions of higher education in the U.K. for stable pensions? Is getting in the way of the marching drum of dehumanizing capitalist accumulation and progress ungrateful…or ethical, real, and just? This is also a question of history, and how we contribute to it as active members of society. The strike in the U.K. is the biggest strike in its history, as these brave individuals refuse to accept what they are calling the “casualization” of staff and challenge their consignment to future poverty. They are writing history, recognizing that the only way change can be made is if collective action can emerge to contest the inequitable, extractive conditions in which they have been working and claim new possibilities.