Graduate Student-workers Push for ‘$7k or Strike’ at CUNY

On Thursday, April 26, adjuncts, professors and graduate assistants at CUNY will vote on whether to endorse a strike if their demand of $7,000 pay per course is not met by university management. 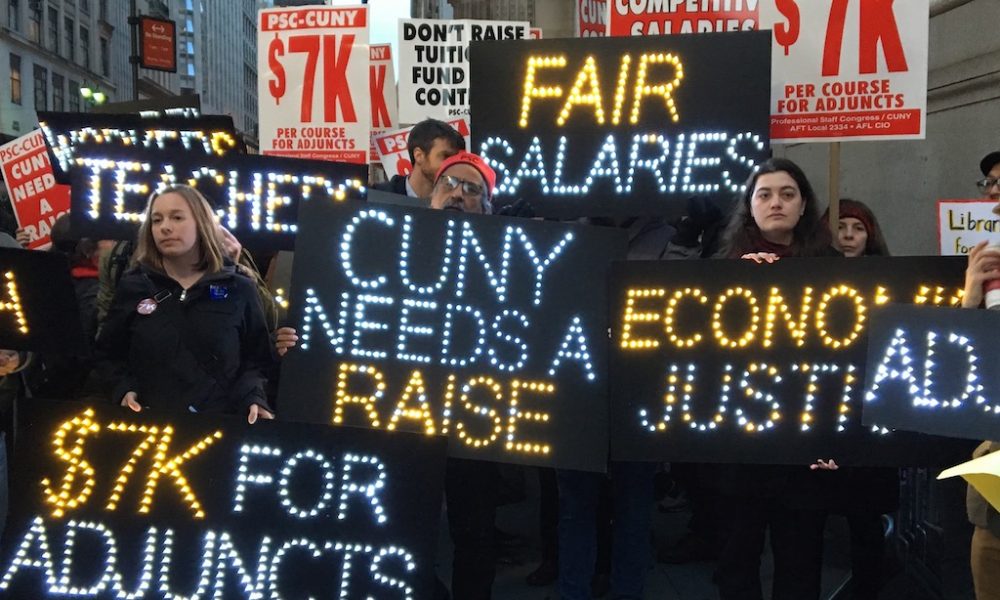 We republish an article which first appeared on cunystruggle.org and the proposed resolution by rank-and-file members of the PSC at the CUNY Graduate Center.

The Graduate Center chapter of PSC-CUNY is voting on a resolution to strike unless adjuncts win a $7k per course minimum wage in the next PSC-CUNY contract. Now is our chance to take a real stand against austerity, while there’s still anything left to defend. 7k or Strike!

This important vote will be held Thursday, April 26, 12:30-2pm in room 5414 and is open to all GC chapter members. We need as many people as possible to come out in support of a strike if adjuncts don’t get 7k.

For decades the standard of living for most of CUNY’s workers has been ground down, while the lowest tier of its educational workforce – adjunct faculty – has become larger and more impoverished. Previous PSC-CUNY contracts have only exacerbated this race to the bottom by widening the gap between adjuncts and full-time faculty. In the process the PSC has promoted poverty wages for CUNY adjuncts, reinforced their second-class status in the CUNY community, and devalued not just the labor of all CUNY workers, but also the education our students receive.

The PSC’s business unionist strategy – politely lobbying Democrats, cajoling management behind closed doors, and mobilizing its membership like set pieces, from the top down – has proven an abysmal failure. The PSC was the first to endorse Bill de Blasio for re-election and got absolutely nothing in return. The PSC regularly wastes time, money, and petroleum making lobbying trips to Albany, and has absolutely nothing to show for it. In the face of the controlled demolition of the CUNY system by the forces of austerity, the PSC goes behind closed doors to politely beg for table scraps, and comes away empty handed every time.

Meanwhile, teachers in West Virginia, Kentucky, Oklahoma, and Arizona are leading by example. The public sector teachers’ movement is rising because it doesn’t play by the rules that the PSC follows – rules that rig the game against public education. Strikes are illegal in every state where these teachers are organizing. But the teachers who are leading the national movement against austerity know that there’s no such thing as an illegal strike – only a failed one.

Public education workers are on the move. It’s time for CUNY to follow.

Proposed resolution to be considered at the chapter meeting on Thursday, April 26:

Whereas adjuncts make up 57% of the faculty at CUNY and teach 53% of classes, at an average rate of $3,500 per three-credit class with no compensation for research or advising, amounting to an annual salary of $28,000 for the same courseload as full-time professors, who make $76,000 at the lowest step;

Whereas adjunct poverty is detrimental to student success since adjuncts, who teach the majority of lower-level courses, are forced to work additional jobs and consequently do not have the time they need and want to dedicate their students;

Whereas devaluing adjunct labor is the principal means of devaluing the labor of CUNY education workers across all titles;

Whereas the PSC has rightly put adjuncts at the center of the current contract campaign by demanding an adjunct minimum wage of $7,000 per three-credit course in the next contract;

Whereas $7k per course amounts to a living wage in New York City and is parity with what a full-time lecturer makes at CUNY for the same work;

Whereas $7k per course is a bigger demand than what the PSC has won in past contracts, which rarely keep pace with inflation, and thus requires more than collective bargaining supplemented by occasional demonstrations to win;

Whereas the PSC leadership has admitted in the 26 March 2018 bulletin This Week in the PSC that “the campaign to more than double adjuncts’ pay will be waged not at the bargaining table”;

Whereas the inefficacy of lobbying is exemplified by the PSC’s persistent lobbying year after year for the $200m Maintenance of Effort bill, which failed to stop Cuomo from vetoing it and failed to convince state lawmakers from overriding the veto despite having enough votes;

Whereas educators across the country, especially in West Virginia where striking teachers won 5% raises for all state workers, have shown the power and necessity of striking as an alternative means to achieving significant victories for workers;