On October 19th 2016 the Philippine National Police (PNP) drove a police truck over people protesting US imperialism in front of the US Embassy. 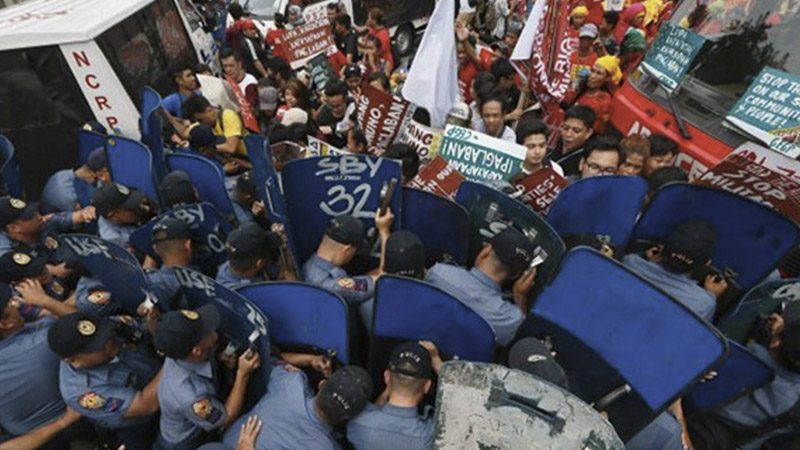 On October 19th 2016 the Philippine National Police (PNP) drove a police truck over people protesting US imperialism in front of the US Embassy. They ran over the protestors not once, not twice, but three times. The scene is captured in this brutal video:

The protest in which this police violence took place was one of the many events that occurred during Lakbayan ng Pambansang Minorya—a 2-week gathering of National Minorities consisting of Moro and Indigenous Peoples of the Philippines. The gathering is meant to help form stronger alliances and shed light on indigenous people´s struggle against the capitalist plunder of their ancestral domains. For example, the Dulangan Manobo tribe in Sultan Kudarat have been facing military harassment enforced by the land grabber Victor Consunji. Consunji has been trying to displace the tribe to deforrest their land for timber. Members of the tribe have continuously found leaders of their tribe murdered in ditches and their homes were occupied by corporate militias last year.

At this protest, national minorities and other protectors of Philippine sovereignty protested outside of the US Embassy to demand the removal of US military presence in the Philippines. Through the Enhanced Defense Cooperation Agreement (EDCA) unlimited numbers of US military troops can stay on Philippines military bases for as long as they want. Agreements like EDCA allow the US to oversee the Philippine military and maintain a large imperial presence in the region. Meanwhile US military personnel continue to abuse Filipino people, such as the murder of trans woman Jennifer Laude by US Private Joseph Scott Pemberton.

PET is only one example of US involvement in Filipino affairs. The US continues to support police repression against working class peoples’ within US borders and abroad. Since the US bought the Philippines for $20 million from Spain—the former colonizers of the Philippines—after the Spanish-American war, the US has enforced control over the land, resources, and people of the Philippines. The Philippine government has acted as the complicit puppet of the US.

This US trained police force is the same type of police force that murders Black people in the US with impunity and represses protestors at Standing Rock. The police in the Philippines serve the same capitalist interests as those who seek to poison the water of the Sioux tribe at Standing Rock. Corporate attacks on indigenous people are global and so our resistance must be as well.

Chelsea Carl is a guest contributor to Left Voice. She is a member of Anakbayan East Bay.