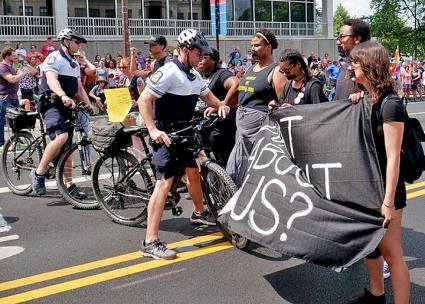 Last year’s Gay Pride parades coincided with yet another gross injustice perpetrated against Black people by the (in)justice system. The policeman who murdered Philando Castile was ruled “not guilty” by a court of law. Castile had a concealed-carry permit, and he informed the police he was armed before he reached for his wallet. He was shot in front of his girlfriend and his four-year old daughter. His girlfriend live-streamed the moments after the shooting, during which she continued to remain calm and controlled while interacting with the police officer who had just murdered her partner.

This police officer was declared “not guilty.” Once again, the courts demonstrated that it is legal for police officers to murder Black people in America. The police are the enemies of Black people, who are regularly harassed, imprisoned, and murdered at their hands.

At Pride parades around the country last year, Black LGBT people held actions, voicing their indignation at the injustice surrounding Philando Castile’s murder and also at the disproportionate murder of Black trans women. Last year alone, 27 trans people — mostly women — were murdered in the United States. In these cases, the police often persistently misgender the victims, re-victimizing Black trans women and our communities.

Police animosity toward LGBT+ communities has a long history. At Stonewall, LGBT people — mostly LGBT+ people of color — were being rounded up by police when they decided to fight back, sparking a three-day riot against police violence. The uprising was supported by groups such as the Black Panthers and Young Lords. At Stonewall, the birth of Gay Pride, the LGBT community fought back alongside allied people of color against a police force that victimizes both. And yet, all around the country, police forces today are allowed to march in LGBT pride parades. They decorate their cars with rainbows and march alongside the corporate sponsors.

At last year’s Gay Pride parades, Black people and others protested police participation in Pride in many cities, blocking parades to bring attention to both the number of trans women of color murdered and Philando Castille’s non-indictment. This occured in the Twin Cities, Washington DC, New York City, Chicago and Columbus. In Columbus, four Black and trans people known as BlackPride4 were violently arrested while peacefully protesting at the parade. Three have already gone to trial and were found guilty on February 12th, 2018, of charges ranging from disorderly conduct to resisting arrest. One of the protesters, Wriply Bennet, will be sentenced on March 13 and could be facing jail time.

Activists in Columbus have organized a petition and are asking for shows of solidarity today, the day before the sentencing. Sign the petition here and tell your friends/family/co-workers and other social justice advocates.

We must make our voices heard on behalf of Bennet and against the (in)justice system, against the police, and against a Pride parade that has turned its back on our history, choosing the side of police and corporate sponsors instead of those LGBT+ people of color most oppressed amongst us.