While United Metro Energy Corp. workers were picketing in front of the company gates, the union representatives undercut the strike by allowing trucks to continue to come and go. 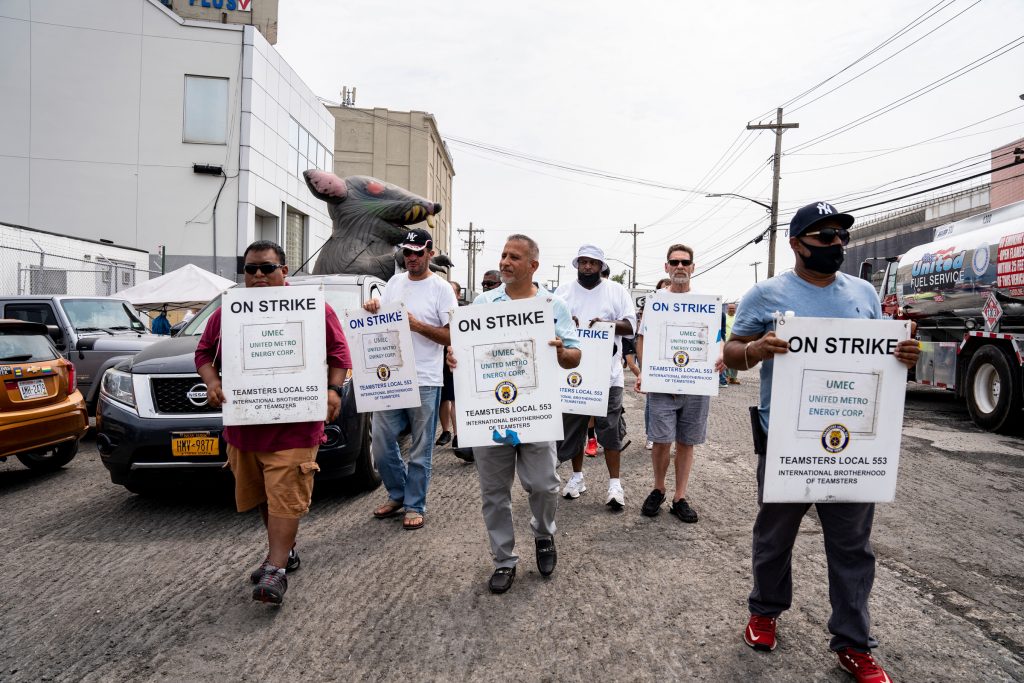 On Aug 10, Teamster Joint Council 16 called a rally outside the gates of United Metro Energy Corp, in support of workers who have been on strike for nearly four months. The essential workers are responsible for the movement of petroleum and other fuels that power the “City That Never Sleeps; they walked out on April 19, in an escalation of their fight for a first union contract. Ever since they voted to join Teamsters Local 553 in early 2019, billionaire owner John Catsimatidis has done everything he can to stall the first contract. Left Voice has been following the struggle since it’s early days: read more about it here.

The rally — a few dozen strong — began with speeches from Teamster Local 553 Secretary-Treasurer Demos Demopoulos and a handful of local DSA and DSA-backed Democrat politicians: NYC Assemblymember Emily Gallagher, City Council candidate Tiffany Cabán, and NY State Senators Julia Salazar and Jabari Brisport. Also speaking were three rank-and-filer workers, Andre Soleyn, Ivan Areizaga, and Asaaf John, who spoke about why they struck and their experience on the picket line. Following the speeches, photos were taken, and so ended the official rally.

In his speech, Andre Soleyn said: “I’m here as part of a group of essential workers. We’ve been here throughout the pandemic and we’ve been working hard for this company. We can’t stay home and load the trucks. We can’t stay home and fix the boiler…And in addition to that, we make sure that the city is run, we are the lifeblood of the city. But we’re not being compensated enough.”

Ivan Areizaga spoke about his son’s Type 1 Diabetes and his family’s struggle to ensure he has access to the proper medication. He added that “what we’re fighting for is better benefits, pay as the rest of the industry is getting, protection for ourselves, for our family, better working conditions.” Lastly, Asaaf John explained that “here you are treated like you’re not a human being. Four months [on strike] and still we can’t get what we’re asking for ourselves and our family”.

Immediately afterwards, the striking workers led a short procession towards the depot gates to block fuel trucks coming in to load, followed by a string of supporters who walked the line with them. Meanwhile, the Teamster bureaucracy and staff continued to hobnob with the politicians. Workers stopped a handful of fuel trucks and service vans outside the gate for a short time, or, having crossed the line, were blocked from leaving the depot. Shamefully, one such truck was driven by a fellow Teamster, (worse yet, an actual shop steward even) who respected the picket early in the strike but who has since decided to scab.

The militant activity of the rank-and-file initially forced Teamster leadership to slow down trucks a few hundred feet up the road from the gates, but soon afterwards, the union bureaucracy began to make a path through the picket line to allow trucks to cross. They claimed that some of the drivers were not scabs; they were “good guys at a good company,” and that the union was doing everything they could to win legally. This caused an uproar between many of the workers and the union bureaucrats, who were becoming increasingly isolated on the line. Members of Left Voice and other groups stayed with the workers to hold the line.

As the picket was winding down, strike leader Andre called an impromptu meeting of the workers and supporters to discuss how to continue blocking trucks. It was decided that picket lines will be established on Tuesdays and Thursdays — the busiest days of the week — between 8:00 a.m. and 11:00 a.m. This is a perfect illustration of how, as workers gain confidence in fighting, union democracy is always sure to follow. All the decisions can, and should, be made by the workers, not imposed as top-down decisions by compromised labor bureaucrats.

Though small in numbers, this was one of the first attempts during this strike to establish a real picket line; that is, one that actually tries to shut down the workplace. The confidence to stop the trucks comes partially from workers’ frustrations with the union leadership after over 100 days of striking, but also because workers believe the company is moving to settle soon; there has been movement on pay rates and the company has asked for back-to-back negotiation sessions. More drivers are respecting the strike every day, and Ivan tells Left Voice that he believes UMEC is feeling the strike’s effects: ten costly pipeline shutdowns have been caused by incompetent scabs and uncertified managers; a faulty calibration led to the company giving away one percent of its fuel for free and the company simply needs all hands on deck to prepare for the winter rush season. To force the company’s hand, though, the workers must continue to escalate this pressure. Indeed, they are the only ones who know how to do the work safely.

To really stick it to Catsimatidis, what’s needed are more and larger picket lines, to shut down the depot entirely. In his speech, Secretary-Treasurer Demos referred to New York as a union town; buta real union town could mobilize more workers on a picket line. There are more than a hundred thousand Teamsters just in Joint Council 16, and many thousands more in the New York City labor movement. Union leadership could do more to mobilize those masses if they wanted to. Left Voice urges supporters to fight alongside UMEC workers, and especially to join the picket line on Tuesday and Thursday mornings.