The workers of United Metro Energy Corp. in New York City have been striking for two months to win a first contract. Against a billionaire boss who continues to delay negotiations, it will take militant action to break this deadlock. 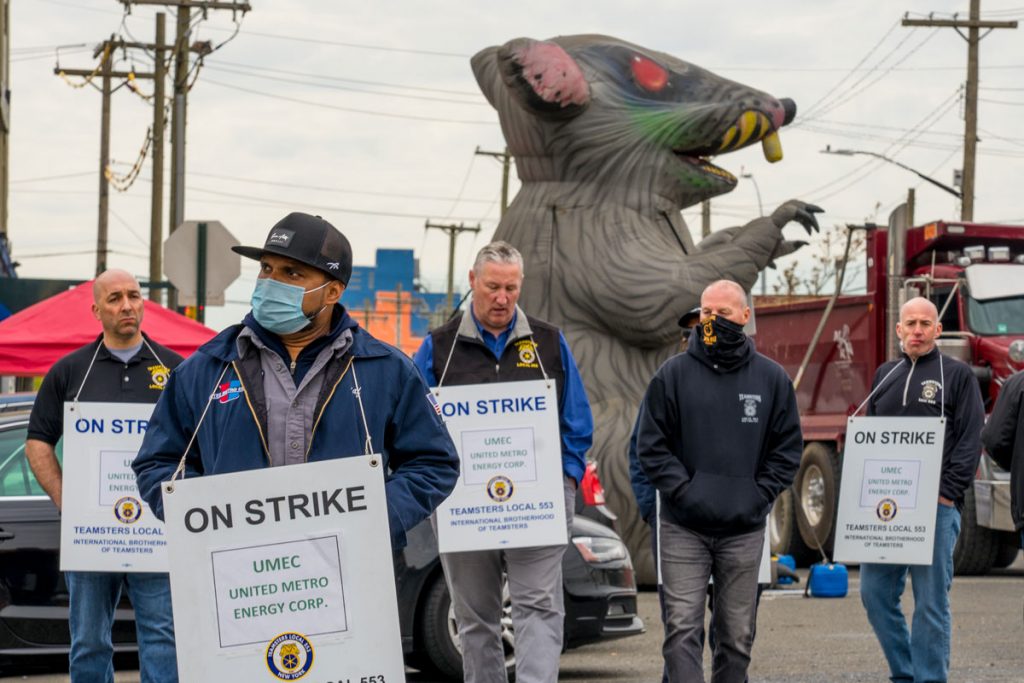 The strike, which began on April 19, is the culmination of a battle for a first contract after the workers voted overwhelmingly to join the Teamsters Local 553 in February 2019. Then, as now, they demand higher pay, inclusion in the union healthcare plan and a pension. They also seek a grievance procedure against favoritism, and the job security that a union contract provides.

United Metro Energy, in Greenpoint, Brooklyn, is just one of a handful of fuel depots in the city that hold and distribute heating oil, gas, diesel, and other fossil fuels to homes, schools, hospitals, gas stations, and even the Metropolitan Transportation Authority. Key to this operation are the nearly two dozen people who operate the pipelines, unload the fuels from barges, fill the trucks, service boilers in the field, repair the machines and more. These workers are not only experienced, with many having worked at the depot for over a decade, but are also certified to work safely. With up to six and a half million gallons of fuel in the tanks, it takes qualified workers to prevent injury and keep the volatile chemicals under control. Beyond the obvious risk of fires and environmental damage from spills, one look at workers’ jackets shows the potent effect of the compounds — particularly from the dyes used to distinguish different fuels.

Over the years, these workers have also played outsized roles during various emergencies. In the aftermath of Hurricane Sandy, theirs was the only functioning yard in the area and they toiled day and night to support the relief effort. Some of the strikers today recall the weeks of hard work amid the destruction of the hurricane. During the pandemic, the 24-hour depot never closed, but continued moving heating oil to hospitals and gasoline to gas stations. Like so many sectors, they were the essential workers in the fight against Covid-19 who were also left out to dry: they never received any hazard pay or, according to a number of workers on the picket line, even a thank you from management who stayed quarantined in their homes.

In short, where the old union song goes “without our brain and muscle not a single wheel will turn,” these workers on strike help move the energy that keeps the wheels spinning. Though they are busiest in the winter, and hundreds of thousands of gallons of heating oil flow each day, the summers keep them occupied with work too, and one can watch trucks lining up to fill up with gasoline and diesel.

Before the February 2019 union election, UMEC was one of only two nonunion depots in the area. Correspondingly, the workers there make between 10 to 15 dollars less an hour than their counterparts in the unionized shops, who do the same work just down the street. It’s a no-brainer then that workers won in a landslide to join Teamsters Local 553, and have fought for over two years for a contract that brings them up to the same standards. Billionaire owner John Catsimatidis — who also owns the Gristedes chain of supermarkets — continues to refuse that standard and has played hardball throughout the negotiations.

Even before the walkout, Catsimatidis retaliated against the vote and has been cutting departments from the yard. He fired all the welders, and cut back on terminal operators, service technicians, mechanics, and laid off all but two of the yard hands. After the strike began, he continued the cuts by “permanently replacing” five strikers, including Andre Soleyn.

Still, the workers have maintained a 24-hour picket line since April 19, with only one worker who refused to join his brothers. There have been rallies, and a number of companies have decided to honor the picket line. Managers and a handful of scabs are keeping the depot running, albeit unsafely. NYC Assembly Member Emily Gallagher and State Senator, Julia Salazar, sent a letter to the Fire Commissioner asking for an investigation into the necessary P-13 certifications of those operating the yard. The strikers joke around about the wisdom of holding a 24-hour picket right next to the aforementioned millions of gallons of flammables being handled by the poorly trained, but that isn’t to make light that any fire or spill into Newtown Creek would be an obviously serious issue.

Strike leader Andre has also noted to Left Voice that there have already been seven shutdowns of the pipelines leading into UMEC — caused by incompetence of the managers and scabs — where there is usually only one or two a year. The only people who can do the jobs well and safely are those on the picket line. Indeed, workers must impose their own safety standards and not let the callous fuel bosses risk an environmental catastrophe with their negligence.

Throughout the strike, negotiations have continued, though they have been slowed by such antics as Catsimatidis leaving the most recent negotiations on June 17 after only one hour claiming that he had another meeting to attend. Though agreeing to the union healthcare plan, the company rejects any sort of pension scheme. Currently, the employers only match three percent into a 401(k) — an insult, given the hard and dangerous work the strikers do — and have offered only a paltry raise that is nowhere near the workers next door.

According to workers, Catsimatidis and UMEC have also been holding up unemployment benefits owed to the strikers through various bureaucratic chicanery. For many of the strikers, the $150 a week in strike pay barely covers the gas and tolls for them to man the picket line, making the unemployment checks even more important.

Shamefully, there are tank trucks crossing the line to pick up fuel that could otherwise be purchased elsewhere in the area. Even worse, some of these trucks are driven by Teamsters of the same local. Though these drivers may eventually be brought up on charges within the union for hauling scab fuel, it does not help the workers fighting now. Greater numbers on the picket line are needed to persuade drivers to do the right thing. Teamsters Joint Council 16, which represents many New York Teamster locals across key industries, has the power to stop de-facto union scabbing. Nothing would help the strike succeed more than a strong show of labor solidarity capable of shutting down the facility.

UPS workers represented by Teamsters local 804 have refused to deliver to the struck United Metro facility — strikers have noticed FedEx trucks delivering packages instead. At a recent 804 barbeque, strikers were well received. Members of IUE-CWA Local 463 have also been distributing leaflets about the strike. These small act ought to be the start of greater union solidarity, and that solidarity is the cornerstone of building the picket lines necessary to halt production and win.

During the Hunts Point strike early this year, Teamster-represented train engineers played a decisive role in helping the roughly 1,000 striking workers win a modest raise. When a train from Iowa carrying 21 cars worth of produce and goods pulled into the Hunts Point terminal, representatives of the striking workers approached the train crew and asked for their support. The train engineers refused to scab, instead turning the train back — still loaded with millions of dollars worth of perishable goods. Such is the power of labor solidarity.

Workers Must Lead the Fight

During the negotiations between local 553 and United Metro, the workers have largely been excluded from most of the negotiations. One worker attends, but only as an observer. Instead, it has been union officials and lawyers calling the shots from above. The strike itself was called without a vote from the membership — as the rank-and-file wonders aloud why they are striking in the slow season as opposed to waiting for the busy winters. Such a state of affairs is sadly quite common in many unions. Still, a number of strikers are taking greater responsibility for the strike and are itching for more militant activity.

To rebuild a powerful labor movement, workers must return to the lessons of how unions won in the past. The victorious 1934 Teamster strike in Minneapolis provides crucial insights. In that formative battle, union democracy was key to success. Those Teamsters of Local 574 elected a one hundred person strike committee to lead the fight. Negotiations were brought back to the membership for discussion. Mass meetings, also known as assemblies, allowed workers to settle disagreements and act as one united force. Mass mobilization — up to and including pitched street battles with cops and scabs — were necessary to ensure that nothing moved without the union’s approval.

Today’s labor movement appears lethargic by comparison. But the sleeping giant of American labor must awaken, sooner or later.