During her tenure as a District Attorney in Minnesota, Amy Klobuchar has consistently criminalized Blackness and poverty. Her “tough on crime” political branding landed people in jail over small infractions like graffiti and truancy. She has also been consistent in allowing cops to get away with murder: she failed to press charges against Derek Chauvin, George Floyd’s killer. 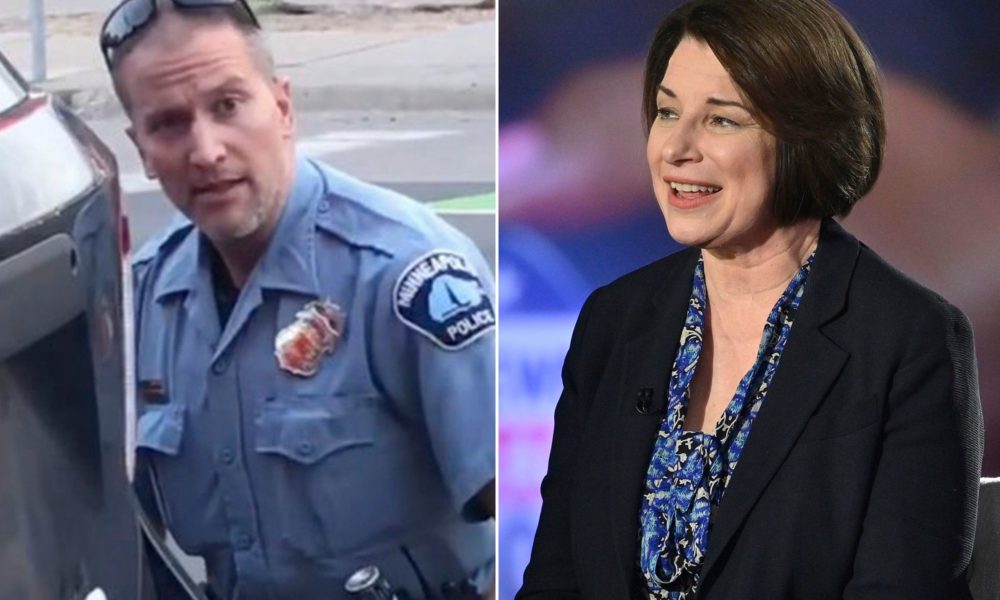 Minnesota Senator Amy Klobuchar was thrust into the public sphere when she publicly called out Trump’s behavior during a hearing, swiftly followed by announcing her presidential primary run “in a snowstorm.” During her time as a prosecutor and her tenure in the Senate, she has proudly positioned herself as “tough on crime” — a position she toned down during her presidential bid. For those familiar with the U.S. so-called justice system, it should be self-evident what this actually means: Klobuchar oversaw and encouraged the over-policing and mass incarceration of Black communities while being incredibly lenient on the state-sanctioned, institutionalized violence of the police force.

The cop who murdered George Floyd, Derek Chauvin, and the three officers that stood by and did nothing have all been fired from the police force. But previous brutality from the same officers went unaddressed. Chauvin had no less than ten misconduct charges under his belt before he killed Floyd. In 2006, Chauvin killed a man who was reportedly attacking the police. Two years later, Chauvin shot and wounded another man during a domestic violence call, only being placed on paid leave. In 2011, he was again placed on leave after once more shooting and wounding a man. Each time, Chauvin returned to the force without skipping a paycheck. He was even awarded a medal of valor.

Klobuchar, who was the district attorney of Hennepin County, overseeing Minneapolis, chose not to prosecute Chauvin, allowing him to continue in his pattern of brutality. Klobuchar has publicly denied this allegation, but she has a clearly defined pattern of not prosecuting cops. Chauvin’s case is one in the more than two dozen other cases of police brutality and murder that Klobuchar chose not to prosecute; her decision allowed the police force to go unchecked and continue its reign of terror.

During her time in office, Klobuchar was a supporter of the “broken windows theory.” She curated her image as being tough on crime, and her eightyear tenure as a prosecutor left harsh prison sentences on often nonviolent offenders such as graffiti taggers and drug dealers. She pushed for longer-than-recommended sentences and also called for changes in legislation that would lengthen prison sentences for repeat offenders. One of her pet projects was punishing school truancy, a “crime” that especially targets lower income families. Needless to say, all of these measures were used to discriminate against the small Black population in her predominantly white state.

In February, the Minneapolis NAACP called on her to end her presidential camaign following an Associated Press report of an African American teenager sentenced to life in prison over the 2002 murder of Tyesha Edwards. Klobuchar, a district attorney at the time, had no evidence except for the now rescinded testimonies of informants. During Klobuchar’s campaign, she cited her involvement in this case as a proud achievement: another Black kid thrown in prison for life on circumstantial hearsay.

The Black community has a deep and well-founded distrust of Klobuchar. Minnesota is one of the whitest states in the United States, with the Black community accounting for less than 6% of the population. However, Black people are 31% of the prison population. This disproportionate number is directly linked to the “tough on crime” policies that target Black communities. Klobuchar has engaged with and actively supported these policies throughout her career.

Now, Klobuchar seems to be desperately vying for the Black vote, a community she never had to court in her previous bids in her own, very white home state. Klobuchar’s Twitter page features a banner with her smiling at two young Black children with the words “Amy for America” laid on top.

Recently, Klobuchar was in the running for the Vice Presidential position on the Joe Biden ticket, with many news outlets hinting that she was the likeliest contender. However, Biden’s team has canceled a digital event with Klobuchar and Dr. Jill Biden, “partly because we need to avoid her.” Her failure to appeal to a Black audience is being scrutinized by Black activists and prominent Black Democrats like Clyburn.

In response to the protests over Floyd’s death, she tweeted, “Everyone is hurting. Anyone with an ounce of humanity is outraged by George Floyd’s killing in the hands of police. The case cries out for action, charges & justice.” Klobuchar has already demonstrated that, when she holds the reins, justice is in short supply. On MSNBC, Klobuchar called out the police officer she had previously let get away with killing Black and Indigenous men, saying, “on that tape was murder.” She then went on, like most politicians, to make a clear distinction between the “peaceful protestors” and the ones that commit “vandalism.” In the end, the solution she mapped out was another tepid, liberal response: an investigation by the Department Justice that will (somehow) lead to “systematic change.”

Minneapolis is now the epicenter of Black struggle. Following the murder of George Floyd, the city center was flooded with people from the Black community and their allies: people who are sick of the news stories and videos showing police murdering Black people with impunity. The protests are quickly spreading to other major cities. They stand against the police and for justice for George Floyd, Breonna Taylor, Sean Reed, and Ahmaud Arbery. Killer cops need to be held accountable. The state needs to be held accountable. Klobuchar strengthened the state’s ability to repress Black, Brown, and working class people. She is no friend of ours.