The strike in France against a planned pension reform has entered its 50th day. One aspect of the movement that has not been highlighted in many media reports is that the weeks of sustained struggle and demonstrations has produced a workers vanguard in which the revolutionary left has a lot of influence. 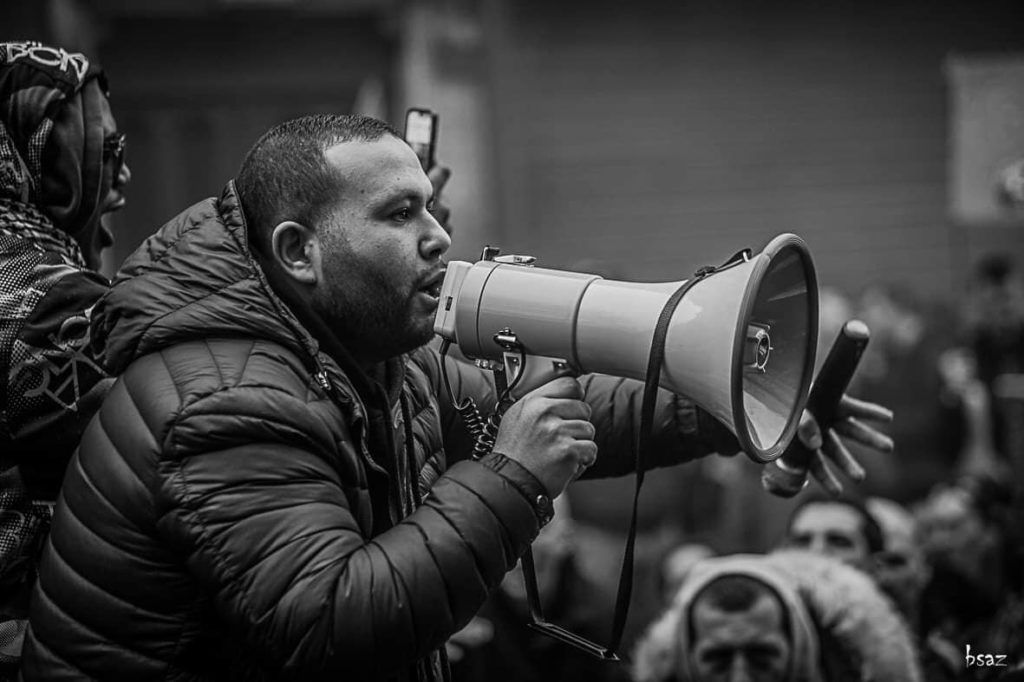 The Revolutionary Communist Current (CCR) — the organization that produces Left Voice’s sister publication, Permanent Revolution — has great influence among the rank and file workers involved in the strike. They have produced countless videos, articles, and footage of strike actions across the country to show the reach of the movement and highlight the struggle of France’s workers for a national and international audience. They have been instrumental in publicizing the intense repression being suffered by protesters at the hands of the riot police, who, on Macron’s orders, break up demonstrations violently with tear gas, clubs, and water cannons.

Anasse Kazib is a CCR militant and a leader among the striking workers who, according to the press, has become a spokesperson for the rank-and-file. Anasse Kazib is a train guard at the Bourgert train station in the department of Seine-Saint-Denis, on the north-eastern outskirts of Paris. He has been part of the Revolutionary Communist Current for four years.

As a report in Le Parisen says, “He has a great agility of words and a thick voice. A guard at the Bourgert transport station (Seine-Saint-Denis) and a trade unionist for Sud Rail, Anasse Kazib knows how to make himself heard.”

Kasib lives on the outskirts of Paris, where millions of immigrant workers from Africa and the Middle East live under the conditions afforded by immigrant and precarious work. He is also a 33-year old father of Morrocan descent in one of the most racist countries in Europe. As Kazib told Le Parisien:

“When you live in Saint-Denis, when you live in Aulnay, we live through calamities and they know it well! We fight for you, especially for the children of all.”

Anasse emerged as a major figure in the news coverage of the ongoing strike when, on a CNews television program on December 29, Fadila Mehal, an advisor to Macron’s party, accused him of “verbal terrorism.” He walked off the program in defiance of her racist and conservative attack.

“It’s an insult to the victims of terrorism to treat someone as a terrorist because he corrected you on a question about pension contributions,” he said indignantly on social media afterwards.

When talking about the strike and France’s recent social upheaval, Kazib often speaks about the “radicality” of the yellow vests, a movement he played a significant role in by trying to draw sectors of the working class into the struggle through his union. He is also a friend to one of the leaders of the movement, Jérôme Rodrigues, who was seriously injured in one eye on January, 2019.

Since the current strike began on December 5, Kasib has appeared in countless articles and videos to denounce the government and the union bureaucracy in the strongest terms, representing the combativeness of the strikers and their determination to scrap the pension reform for good without compromise.

In an article recently published by France TV , Kazib expressed the rank-and-file’s resolve to continue the strike while the government met with top union officials to negotiate a deal, demanding: “No truce, no end of the mobilization! We are calling on all private sector employees to join [the strike].”

Arret Sur Images, a prestigious news blog in France, described Kazib’s intervention in the following way: “From the megaphone to the microphone, it’s just one step. At least that’s what you’d think from the sight of Anasse Kazib’s route. This 32-year-old railway worker has gone from being a very active SUD Rail trade unionist on the track to a regular guest on TV sets….[Audiences across France] listen to his speeches on a wide variety of subjects, from railway reform or pension reform to a polemic on the veil, Muslims, the CICE (Employment Competitiveness Credit) or climate change.”

Kazib has become a columnist, union activist, and the “voice” of the strikers. The prestigious newspaper, Le Parisien, published a long article about him on January 3, 2019, giving him the space to introduce himself to a wide audience across France. He was described as a “revolutionary Marxist” militant who is shedding light on the “misery” of France’s social crisis and “the fate of future generations”. He spoke of the “radicality” that he sees in the Yellow Vest movement, recalling his interactions with Jérôme Rodriguez. His televised interventions regularly draw on a Marxist framework that has nearly disappeared from the airwaves and television in recent years: speaking  openly about “class struggle”, “proletarians”, “the bourgeoisie”, etc.

The liberal media in France are not the only ones taking notice of Kazib. The right-wing news site Valuers Actuelles wrote an article attacking Kazib as a radical who is “on every TV set and every union mobilization”. They warned against his interventions in the strike, saying that he “was able to take advantage of a month-long strike of railway workers to put forward his militant agenda, at the crossroads between “revolutionary Marxism” and homilies in favour of political Islam. [This is] dangerous cocktail – explosive, at the very least.”

Rather than an anomaly or just another attempt to turn public opinion against the strike, Kazib’s appearance in broad sections of the national media is an expression of how deep the strike against Macron’s pension reform is. It shows that the demands of the strikers are inextricably tied to a deeper crisis of capitalism that only the united efforts of France’s workers can solve. It is also a testament to the fact that the revolutionary left can and must fight to develop revolutionary tendencies within the struggles of the working class.