A large march in Berlin on August 30, spurred by right-wing conspiracy theories and notably featuring neo-Nazis, brought out tens of thousands to confront the situation created by the pandemic. Covid-19 and the economic crisis is creating fertile ground for a significant reactionary uptick in Germany. 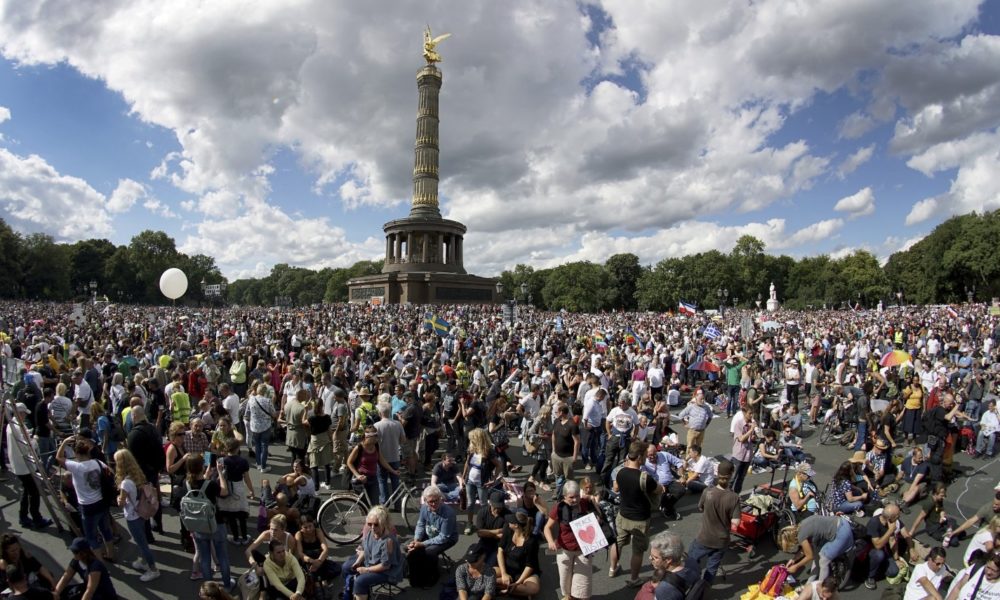 Last weekend in Berlin was marked by a demonstration on August 30 by coronavirus skeptics. Among them were not only anti-vaxxers, conspiracy theorists, and hippies, but also militant fascists.

Although Andreas Geisel (of the Social Democratic Party), Berlin’s state minister of the interior, had forbidden the protest because it carried a risk of virus contagion, demonstrators nevertheless arrived from across Germany. Judges overturned Geisel’s ban on Saturday morning — a scandal considering that only a week earlier the same German judicial system had banned a protest by relatives of those whose children had been killed last February during a terrorist attack in Hanau.1

While the judicial permit required that social distancing be maintained, the order was not respected at any time during the march — as was to be expected, given that the organizers had already rejected both distancing and the use of masks. The police did intervene from time to time during the march, but they let it continue even though the demonstrators did not comply at all with the requirements.2

Among the protesters were anti-vaccine skeptics, right-wing extremists with neo-Nazi symbols, and all sorts of characters who adhere to a variety of conspiracy theories.

Largest Right-Wing Demonstration Since the End of World War II

About 40,000 participated in the march, according to police, while the organizers claim they filled the streets with a million people. Most likely, it was between 70,000 and 80,000. Whatever the number, it was clearly the biggest right-wing demonstration in Germany since the end of World War II.

Back in October 2018, in response to an escalation of racist violence stirred up by ultra-right-wing groups, some 250,000 people mobilized around the slogan #Unteilbar (Indivisible). On Saturday, only a small number came out in opposition to the march, responding to a call by trade unions, the Social Democrats, the Green Party, and autonomists. Opponent numbers reached about 1,000 in the morning and dwindled to about 200 in the afternoon.

It is difficult to convey the composition of the protest. There were families and retirees who have been affected by Covid-19 and want to return to the prior “normal,” but there were also fascist and conspiracists who adhere to Reichsbürger.3 Some chanted, “Out with Merkel” — echoing the Islamophobic right wing. Others carried signs saying, “Peace, Freedom, Love.” But all seemed to agree that masks are unnecessary and that the government is not to be trusted.

The German media was full of coverage of a scene from the march that took place in front of the Reichstag, Germany’s parliament building, which the Nazis allegedly tried to take by storm. A minority of the march — about 2,000 people — suddenly became a sea of Third Reich flags. Led by a former official of the German National Socialist Party (NPD), they overran several policemen. This “attempt” was mostly a symbolic act for right-wing propaganda purposes.

There have been other smaller but similar protests, and this was the second one in August. But the far-right Alternative for Germany (AfD) party has been losing part of its base, according to several polls. Instead, we’re seeing a right-wing trend in other, more institutional spheres. In recent years and months, fascist cells have been discovered within both the Bundeswehr (Federal Defense Forces)  and the police; they were preparing to seize power and kill political opponents, and they have threatened politicians, lawyers for families that have suffered losses at the hands of fascists, and the families themselves through letters with death threats signed by the NSU 2.0 — a reference to the fascist National Socialist Underground (NSU) group, backed by the state, that murdered immigrants from 2001 to 2007.4

A Long Tradition of Supporting the Structures of the Right

Time and again, the hundreds of cases of extreme right-wing terrorism, the innumerable entanglements between the state and the Right, and the establishment of ultra-right-wing organizations within the Federal Office for the Protection of the Constitution are declared to be “individual” cases. But the German state has a long tradition of supporting the structures of the Right.

Denazification has not failed only because of inconsistency. The biggest winners of the war — the big capitalists who supported Hitler — got away with it. The bosses realized tremendous economic gains from the expropriation of the Jews and from the war itself. Corporations such as Volkswagen relied on the state-sponsored war economy, and there was hardly any large company that did not benefit from forced labor. All of them were allowed to keep their stolen profits after the war.

Today, it is the first effects of the economic crisis — the pace of which is being accelerated globally by the pandemic — that create fertile ground for all sorts of reactionary tendencies, which both historically and today find their greatest social base in the petty bourgeoisie.

The state bails out large companies while small and medium-size enterprises receive little assistance. At the same time, many workers have been forced to work reduced hours, which deprives them of part of their wages. Their protests against coronavirus-related measures become a reactionary response to a social question because the right wing is taking advantage of the desperation.

For these things to change in reality, what we need is the unity of the exploited and the oppressed — workers, immigrants, women, youth — not compromises with the right wing.

First published in Spanish on August 31 in La Izquierda Diario.