Antiwar Russians in the Streets Show the Way Forward. Stop the Repression!

Vladimir Putin’s incursion into Ukraine comes as tensions increase between Russia and NATO. But despite repression, many are fighting back against military escalation. Internationally, we need antiwar mobilizations that demand not just the end to war, but also sanctions, which only harm the masses. 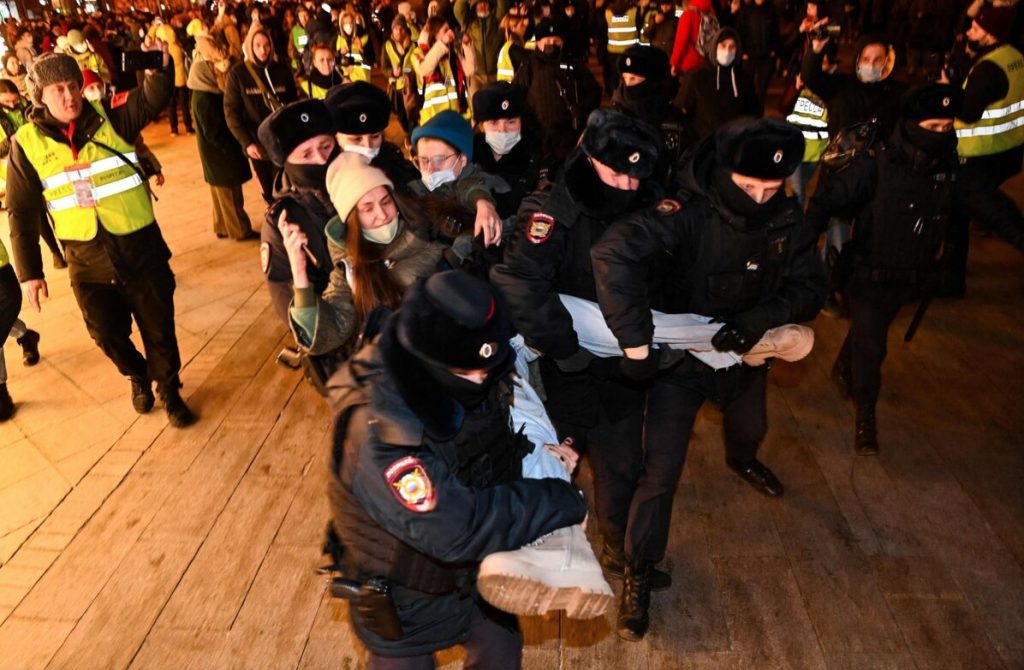 On Thursday evening, Russian activist Marina Litvinovich was detained by Russian police after calling for antiwar protests in response to Vladimir Putin launching a military attack on Ukraine. Litvinovich says she was detained on the way out of her house after she had called on Twitter for Russians to gather to protest across the country on Thursday night.

Litvinovich is not the only one who has been repressed. Antiwar activists have begun to mobilize throughout Russia, and have been arrested. Yet despite these arrests and a heavy Russian police and military presence on the streets, people in Moscow, St. Petersburg and elsewhere are protesting.

Putin’s direct attack on Ukraine comes after decades of increasing tension between NATO and Russia for the control of the zone of influence of the former Soviet Union. The advance and escalation of the U.S. and NATO military presence in Eastern Europe, which has been going on for decades, along with Putin’s recognition of the self-declared independent Donetsk and Lugansk republics on Monday, have contributed to this morning’s operations. But many in Russia, Ukraine, and around the globe reject the military escalation.

War is unpopular in Russia, as is Putin. His recent military intervention in Kazakhstan, for example, was very unpopular. Given the structural crisis at home, he faces immense pressure — especially as the Russian masses are the ones who have to bear the brunt of new sanctions by the West, and it is their family members who will be coming home in body bags as war continues.

The crackdown comes with the government’s full awareness of what a potential mobilization of the Russian working class against its military escalation would mean. In Pushkin Square in Moscow, for example, a lockdown was imposed ahead of any anti war protests.

A high- profile Russian soccer star, Fedor Smolov, has even spoken out against war on Ukraine, expressing this growing antiwar sentiment.

The repression does not seem to be working, and many people are still coming out to oppose military escalation —although the exact political character of the demonstrations remains unclear. St. Petersburg has seen large-scale protests.

The United States and NATO, meanwhile, are working to position themselves as the “peaceful” actors sticking “only” to sanctions. President Biden this afternoon announced an increase in sanctions as a response to Russian actions. But, sanctions, which the United States often claims as an alternative that avoids war, always disproportionately harm the working class — and as such are a form of violence. That’s precisely why we demand an end to sanctions immediately.

Despite attempts to look like “the good guys,” both the U.S. imperialist state and NATO have been central to establishing the terrain for the current escalation — as they have done before in so many international conflicts. The West will use its opposition to Russia’s militarism to drum up support for its own agenda, which is just as much of a dead end.

It is still not completely clear how other NATO countries will respond to the increasing escalation, but what is clear is that the international working class should rise up to oppose war. We must stand explicitly against repression against protesters, not just in Russia, but wherever in the world people demand an end to imperialist wars. The time is now for antiwar mobilizations based around international solidarity with the oppressed around the world.