Antoinette Konikow (1869-1946) was a pioneering socialist feminist, advocate for women’s reproductive autonomy, and a founding member of the Socialist Party of America, the Communist Party, and then the U.S. Trotskyist movement. Sadly, today she is little known and underappreciated, though she deserves wider recognition. 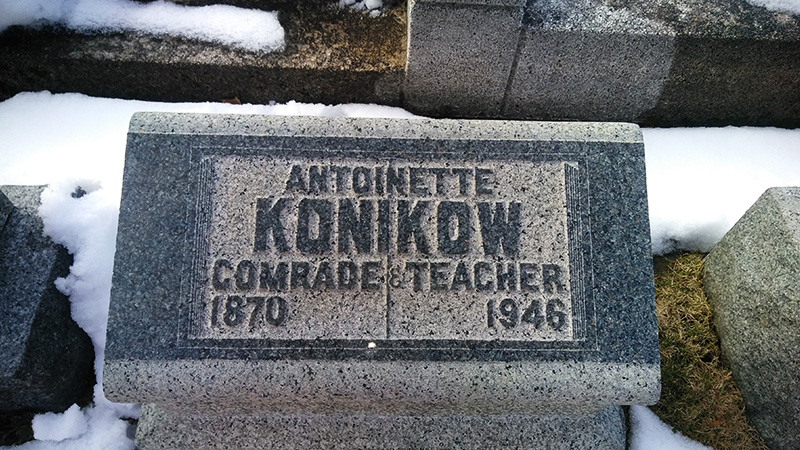 Antoinette Konikow was born Antoinette Bucholz in Orenburg, Russia, on the Volga River, near Kazakhstan, of ethnic Jewish parents, both of whom were socialists. She went to secondary school in Odessa. At 19, she went to university in Zurich, Switzerland, and studied medicine. She joined George Plekhanov’s Emancipation of Labor Group, the first Russian Marxist group and the predecessor of the organization that later split into the Bolshevik and Menshevik factions. Bryan Palmer, in his book James Cannon and the Origins of the American Revolutionary Left, 1890-1928, mentions that Konikow abruptly left Zurich after an incident involving explosives at a boarding house that she was staying at with fellow radicals. Konikow immigrated to the U.S. with her husband in 1893 and completed her medical education at Tufts University, then Tufts College, near Boston, graduating with honors.

In the U.S., Konikow remained involved in the socialist movement. The same year she emigrated to America she became an organizer with unemployed immigrant workers and then joined the DeLeonist Socialist Labor Party. She was very active in the Workers Circle, a Jewish mutual aid society, and learned Yiddish (which she did not speak in Russia) to aid in her work with immigrants. Konikow left the SLP in 1897 over its bureaucratism and dogmatism. She worked with Eugene Debs and Victor Berger and was active in several short-lived socialist groups they organized. At one point, she worked with a dissident group that split from the SLP and attempted to convince them to join Debs’ and Berger’s organization. She then became a founding member of the Socialist Party of America and was a delegate to their first convention in 1901. She worked with Eugene Debs and became a leader of the Socialist Sunday School movement, a socialist youth education project designed as an alternative to Sunday religious instruction for young people. Under her influence, this movement was renamed the “Socialist Schools of Science.” Konikow also served on the Socialist Party’s five-person Women’s Commission. She became known as a passionate speaker and was a tireless advocate for women’s rights in a repressive era.

Antoinette Konikow had two children. She divorced her husband, Moses Konikow, in 1910, at a time when divorce was difficult. Her divorce was reported in the New York Times, which called her a “prominent Socialist orator.” A year later, Konikow spoke out in defense of Meta Fuller, who had been widely criticized after divorcing the socialist novelist Upton Sinclair. The New York Times again mentioned her, quoting her letter of solidarity to Fuller, which said, “Many thousands are throwing mud at you and speaking with bitterness for the simple reason that they all envy your display of courage, open-heartedness, and your love for truthfulness.”

After the First World War began in Europe in 1914, Konikow toured the U.S., speaking against the war. She was inspired by the German socialist Karl Liebknecht, who, at much risk to himself, spoke out against social patriotism in Germany. Konikow was a big supporter of the 1917 Bolshevik Revolution.

She served as chair of the New England division of the Communist Party’s National Defense Committee, a CP organization dedicated to raising money to cover the party’s legal defense needs. In 1924, she was the Workers’ Party candidate for the U.S. Senate from Massachusetts.

As a doctor,Konikow served working-class and immigrant women at her clinic in the Boston area for many years. The late 19th and early 20th century was a sexually very repressive era in the U.S.. From the mid-19th century onwards, women’s reproductive choices had been increasingly medicalized and taken out of their hands. The 1873 Comstock Law banned the sale of contraceptives and the dissemination of abortion and birth control information though the U.S. mail. By 1900, some form of abortion was a felony in every U.S. state. In challenging this, Konikow became one of the pioneers of the U.S. birth control movement. Konikow frequently performed abortions and provided contraceptive information to her patients, often writing her medical notes in code to protect both herself and her clients from the police raids she had been subject to. In 1923, she published Voluntary Motherhood, the first birth control manual by an American doctor, primarily oriented towards immigrant women. In 1928, she was arrested for teaching contraceptive use at a private home during a meeting of the Birth Control Society of Massachusetts. This organization worked to defend her, and she was acquitted. In 1931, she wrote the Physician’s Manual of Birth Control to fight the ignorance of this issue within the medical profession.

In 1926, Konikow visited the Soviet Union with her son-in-law John Vanzler (who sometimes used the name John Wright), also a socialist, a chemist, and later a translator of Trotsky, to demonstrate a cheap spermicidal jelly they had jointly developed. Her visit to the USSR solidified her growing disillusionment with the direction the Soviet Union was taking, and she developed sympathies with Trotsky and the Left Opposition. By this time, the U.S. Communist Party, long beset by feuding factions, had come increasingly under the influence of Stalin. The Soviet-led Comintern had placed the unpopular and authoritarian Jay Lovestone as CP leader. In 1928, a group of U.S. sympathizers of Trotsky and the Left Opposition, James Cannon, Max Shachtman, and Martin Abern, were expelled from the Party. After Konikow expressed sympathies for Trotsky, Lovestone abruptly summoned her to New York to appear before the Party’s Political Committee to account for her views, placing her in a difficult situation. Konikow’s reply to Lovestone revealed Lovestone’s underhanded bureaucratic maneuvers and the degeneration of the CP:

“You know well that going to New York from Boston means quite an expense and that leaving my medical practice for several days involves a big financial lost. Why can’t a local committee consider my case?… According to the latest decision of the Comintern we should have full inner party democracy. Why does this not apply to the Trotsky Opposition?”

In reaction to Konikow’s letter, Lovestone reportedly said, “It is obvious from her letter that she is the worst kind of a Trotskyite biologically as well as politically. The sooner we throw her out the better for the party.” Konikow was expelled shortly thereafter. Interestingly, six months after he expelled the Trotskyists, Lovestone himself was expelled from the Party. He politically drifted to the right, and by the early 1960s, he was working with the CIA in Latin America, collaborating with the Kennedy Administration to overthrow governments in Latin America.

After her expulsion Konikow formed a small Trotskyist organization in Boston, the Independent Communist League, which merged with James Cannon’s Communist League, the predecessor of the Socialist Workers’ Party, in 1929. In 1938, she was made an honorary member of the then Trotskyist SWP’s governing National Committee at its founding convention. Konikow provided an important socialist feminist voice in the early U.S. American Trotskyist movement, and in her 1941 article “Birth Control Is No Panecea But It Deserves Labor’s Aid Against Reaction,” published in the SWP’s The Militant, eloquently argued for the fight for women’s reproductive freedom.

In November of 1938, the SWP held a commemoration of Konikow’s 50 years as a revolutionary socialist. Trotsky wrote to her for the occasion, saying, “We are proud, my dear Antoinette, to have you in our ranks. You are a beautiful example of energy and devotion for our youth. I embrace you with the wish: Long live Antoinette Konikow.” Konikow said to the young people who had come to the commemoration, “We place in your hands a banner unsoiled. Many times it was dragged into the mud. We lifted it up and lovingly cleansed it to give it to you. Under the red banner of Marx, Lenin and Trotsky, you will conquer”.

Antoinette Konikow passed away in 1946 in Boston while writing her memoirs.