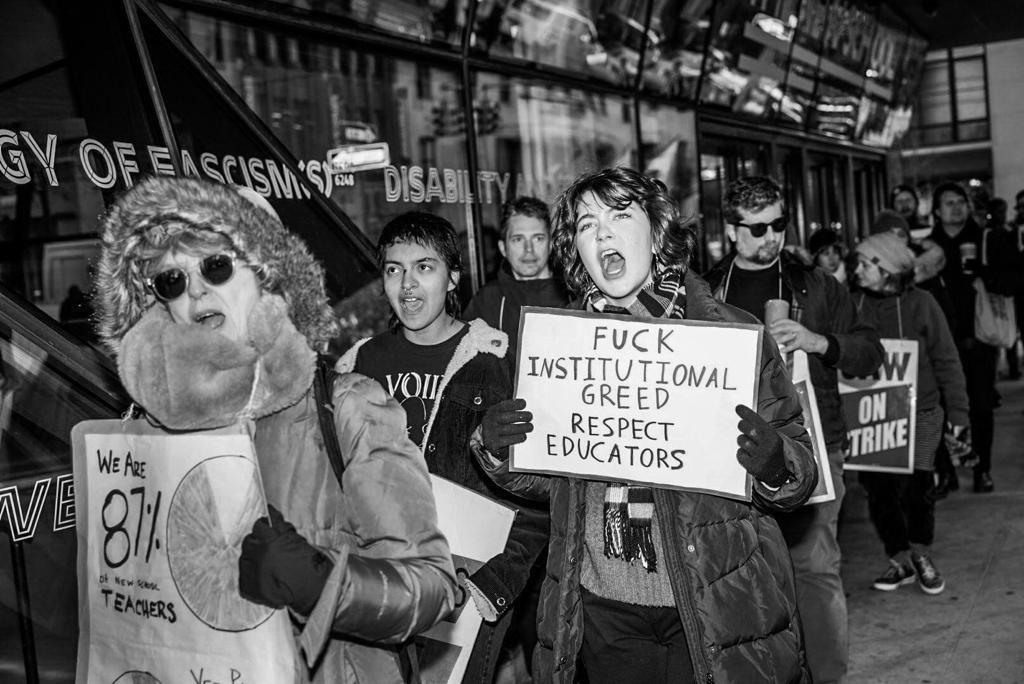 Part time faculty at The New School in New York City (UAW Local 7902) and student and postdoctoral workers across the University of California system (UAW Local 2865, UAW Local 5810, and SRU-UAW) are midway through the third and fourth week of their strikes, respectively.

Higher education is a key site for the labor movement right now, with all six of the biggest new bargaining units filing for election in 2022 coming from this sector. The UC strike is the biggest strike of academic workers in U.S. history, and the The New School strike is the biggest-ever U.S. strike of part time faculty. These workers are showing workers everywhere the value and power of organized labor action, and their power will only grow as students, full time faculty, university staff, and workers from other unions join the picket lines and refuse to do business with the schools.

At most colleges and universities in the United States, early to mid December means final exams, followed by the submission of final grades. From an economic standpoint, this concludes a production cycle for the university: course credits are “produced,” and dorm and meal plan contracts end. Winter commencement means new alumni are also produced. Financial aid paperwork is processed. All of this means that the end of the year is a critical time for universities’ bottom lines. Now is the time to press forward.

Accordingly, the administrations of the University of California (UC) and The New School are growing increasingly desperate to crush the strikes, settle union contracts for as little cost to the university as possible, and return to the status quo. As a result, the universities are escalating attacks on the workers while the unions fight to hold the line.

This week, The New School announced that it would begin docking pay and benefits of both union members and any full time faculty allies who were joining the strike in solidarity. Part time faculty make up 87% of the teaching staff at The New School. This means workers will be forced to pay the full cost of their healthcare premiums or lose their coverage, right as New York is experiencing a new post-Thanksgiving surge of Covid-19, RSV, flu, and other respiratory viruses. The university is also attempting to hire “temporary progress reviewers” (scabs) to grade student work in advance of the final grade deadline. This move comes a week after the university forced a vote using the legal tactic of “last, best, final offer” and union members resoundingly voted it down.

Part time faculty at The New School remain committed to the strike, and the full time faculty at three of the university’s constituent colleges unanimously voted to hold steady in their support of the union, demand that The New School rescind its plan to dock pay and benefits, and consult with lawyers on possible legal action. Thursday afternoon, students began an occupation of the lower levels of the main academic building. Only two hours after the occupation began, The New School emailed a notice to the campus community that the university bargaining team had decided to meet all of the union’s compensation demands while offering counterproposals on other items. This was a clear attempt to stop the occupation and save face after the veritable PR disaster of the school’s attempt to dock pay and benefits. The strike will continue while the union reviews and discusses the proposal.

This occupation comes just one day after students at five different campuses of the University of California occupied their dining halls and began distributing free food to all who came. Striking workers at some of the campuses have also been occupying administrative buildings on and off for the past two weeks. However, it is only this week that the University has begun to crack down on the occupations, sending in police to evict the workers at the UC Riverside Dining Commons, at the UC Office of the President, and other locations.

Similarly to the faculty at The New School, seven departments at UC Davis have signed a letter supporting the strike and pledging to support all faculty who choose to join the strike in solidarity. Additional letters have been signed by departments across other schools. According to the UC Faculty Association, more than 36,000 final grades will not be submitted, as faculty refuse to scab for the striking academic student employees (ASEs) who would normally be doing the grading for their courses.

Now, at the end of the semester, is a critical time for the unions to continue and expand their disruptions of university operations to whatever extent possible. This is the heart of a strike’s power. At the same time, workers from both inside and outside of these workplaces must organize in solidarity to expand the strike and support the workers, who are being attacked on all sides by their employers. Solidarity with the striking workers!

Readers can donate to the UC strike fund or to the UAW Local 7902 hardship fund by clicking these links.