Russia’s siege of Kyiv has failed for now. Rail workers in Belarus are risking their lives by sabotaging Russian supply lines. Their example shows a way forward to building a working-class response to the war, one that is independent of both Russia and NATO. 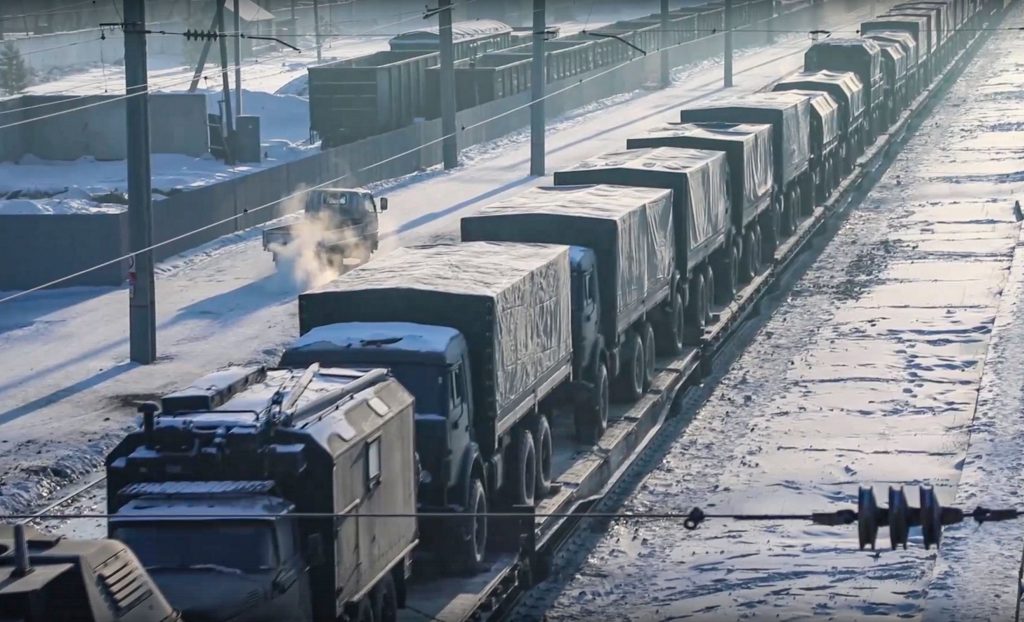 Five weeks after launching its war against Ukraine, Russian forces have withdrawn from the area around Kyiv. According to press reports, they committed a horrific massacre of the civilian population in the suburban town of Bucha as they left. It remains unclear whether the attack in the north of the country has actually been repelled or the Russians are simply regrouping for the next strike. Whatever the answer, Russia’s inability to maintain its siege of Kyiv is due in part to resistance in Belarus.

The country, a close ally of Russia led by President Alexander Lukashenko, has served as a base for Russian troops. But Belarusian rail workers are hampering the war’s logistics.

The War of the Rail Workers

From the beginning of the Russian invasion, Belarusian rail workers were sabotaging signaling equipment and circuits on the country’s railroads, as the news site zerkalio.io reported, citing the Telegram channel “Community of Railway Workers in Belarus.” In addition, hackers launched cyberattacks on the central control systems.

Since then, there have been reports almost daily of new attacks, as published by Deutsche Welle’s Russian-language service:

On March 14, the equipment was out of service on the Damanava-Liasnaya section (Brest region), and on March 16 on the Farynava-Zahatstse section (Vitsebsk region). The next day, “unknown perpetrators” stole six signal transformers from the relay cabinet at Vorsha-Tsentralnaya station, which led to a nearly six-hour outage of signal lights. According to the Belarusian rail workers’ Telegram channel, two switchboards for signaling, centralization, and interlocking were burned on the night of March 25 near Barysau (Minsk region). And on the night of March 28, two switchboards were set on fire on the Asipovichy-Viareitsy line (Mahiliou region), according to the Belarusian Ministry of Emergency Situations.

Belarusian police and intelligence services arrested several people after these acts of sabotage. By March 31, according to zerkalio.io, some 40 rail workers had been detained, including several train drivers, machinists, and auxiliaries from the Gomel city railroad depot. They face charges of “terrorist acts” and “membership in an extremist organization,” which carry prison sentences of up to 15 years.

Armed members of the state security services and military are now patrolling the rail lines and key switching points — but the “war of the rail workers” continues. The sabotage and cyberattacks have meant that trains and switches can now only be operated manually, which limits rail traffic to 15 to 20 kilometers an hour.

Russian army logistics forces are not designed for a large-scale ground offensive far from their railroads. … Russian formations have only three-quarters the number of combat vehicles as their U.S. counterparts but almost three times as much artillery. … As a result of extra artillery and air defense battalions, the Russian logistics requirements are much larger than their U.S. counterparts.

In some cases during the early phases of the war, Russian troops penetrated up to 200 kilometers deep into Ukrainian territory, using the advantage of surprise to capture key positions, but without securing supply routes. Provisions, fuel, and ammunition must now be provided in many places by truck convoys, which are easy to ambush. By mid-March, 485 trucks had already been destroyed, more than a 10th of Russia’s truck fleet, according to Forbes. There are still reports of tanks abandoned for lack of fuel.

In a March 10 article, Vershinin wrote,

Today it is premature to say that the Russian army is bogged or losing in Ukraine because of its sustainment issues. The Russian military is likely to overcome its logistical and maintenance challenges once captured railroads become operational. A new railhead is likely at Kherson, to support the drive against Odessa.

While the Russian army can continue the war in the south and east in this way, it faces huge difficulties in the north. To attack Kyiv would require controlling the northeastern railroad line that runs through Chernihiv and Nizhyn. But it hasn’t gotten that far. Most likely, Russian forces are organizing their supplies from Gomel in Belarus — a center of the rebellious rail workers. And instead of being able to deliver everything they need by train to the front, which is about 100 kilometers away, the sabotage means the troops are being supplied exclusively by truck. That alone makes it difficult to capture Chernihiv, and completely rules out concentrating more troops to surround Kyiv.

The Russian military also faces the same logistical problems northwest of Kyiv, where the Bucha massacre has recently come to light. There, from the beginning of the invasion, Russian convoys had been jammed for kilometers. As long as the railroad workers in Belarus keep up their sabotage, the Russian army will hardly be able to attack again in the north.

Belarus was already heavily dependent on Moscow before the war, but the presence of 30,000 Russian soldiers and the attack from Belarusian territory make it a de facto party to the war — one that takes its orders from Putin. At the beginning of the invasion, Western observers were speculating about the possibility that the Belarusian military would get actively involved — a prospect complicated by the sabotage. Moreover, the country has abandoned its constitutional sovereignty and has officially consented to the deployment of Russian nuclear missiles — which sparked protests at the end of February that were the largest since the 2020–21 pro-democracy movement, and saw 800 arrests.

There is tremendous repression against the opposition in Belarus. Open strikes aimed at blocking military transports are impossible given the circumstances, or they would have to become mass strikes very quickly to topple the regime. The rail workers are risking their lives to carry out their acts of sabotage. The government fears losing control of the railroads, which is why state security services are concentrating their repressive attacks against those workers, sometimes making arbitrary arrests just to intimidate them. But this is only increasing popular hatred of the regime.

Last year’s protest movement demonstrated the security risk to Putin represented by Belarus. The Russian regime’s power is built on suppressing its neighboring countries in Eastern Europe and Central Asia and supporting their authoritarian governments. The fate of Belarus is closely tied to the prospects of war. Should Russia be defeated, Lukashenko might struggle to hold on to power — and the rail workers could play a decisive role in his overthrow.

The example being set by Belarusian rail workers points to an independent position that opposes both the Russian military and NATO’s arms supplies and command. If workers in Russia followed the example and sabotaged, blocked, or went on strike against the railroads, the Russian attack would come to a halt in the south and east of Ukraine. The U.S. and Western European government and media insist that the way to stop the Russian army is to supply weapons to Ukraine. But that will only escalate the war, ultimately leading to a direct confrontation between NATO and Russia.

On its Telegram channel, the Community of Railway Workers in Belarus proclaims, “Our goal is to delay and, ideally, stop altogether the movement of military units and military equipment of the Russian Federation through Belarus.” In addition, there is information on issues such as workers’ wages, firings, violations of safety regulations, the criminal activities of managers, and the overall economic and social situation. The posts also speak out against inflation, which recently stood at around 10 percent in Belarus.

The rail workers are not the same as the liberal Belarusian opposition, which backs NATO. In an interview with the Guardian, Sviatlana Tsikhanouskaya, an opposition leader exiled in Lithuania, called for further Western sanctions against Lukashenko’s regime, “even if that causes pain for ordinary Belarusian citizens.” There have already been numerous trade restrictions imposed on key industrial goods such as mineral oils, wood, iron, steel, cement, and rubber in response to Belarusian support for the war.

As in Russia and Western Europe, the war, with its sanctions and arms spending, comes at the expense of the population at large, with rising prices and the threat of unemployment. The anti-war movement must fight worldwide to ensure that no more weapons are supplied to the war zone, either by Russia or NATO. In Pisa, Italy, workers at the airport refused to load weapons, ammunition, and explosives — all disguised as “humanitarian aid” — that were to be delivered to the Ukrainian military. And in Greece, railroad workers blocked the delivery of tanks to Ukraine. In Hamburg, the Verdi trade union launched a campaign against arms exports from the port, and in other German states, truck drivers have blocked highways to protest inflation.

To stop the war, we need workers in the European Union and NATO countries, as well as in Russia and Belarus, to take action against their governments. Workers in the transport sector have the power to stop the entire war machine of both sides. We need an international campaign by trade unions in Western Europe, Eastern Europe, and Russia, with blockades and strikes to stop the arms deliveries and to protest the deterioration of living conditions. Militant unions and left organizations, coordinating their political objectives, methods of struggle, and actions across countries, can build a third independent position and stop the war.

If you really want to stop the war now, you cannot line up behind NATO or Putin. The heroic struggle of the Belarusian rail workers shows the way forward.

First published in German on April 4 in Klasse Gegen Klasse.