With a new executive order, the Biden administration has begun the process of seizing assets from Afghanistan to set up a toothless “humanitarian assistance” trust fund and give the rest to the families of 9/11 victims. Afghans, whose money this is, had nothing to do with those attacks. 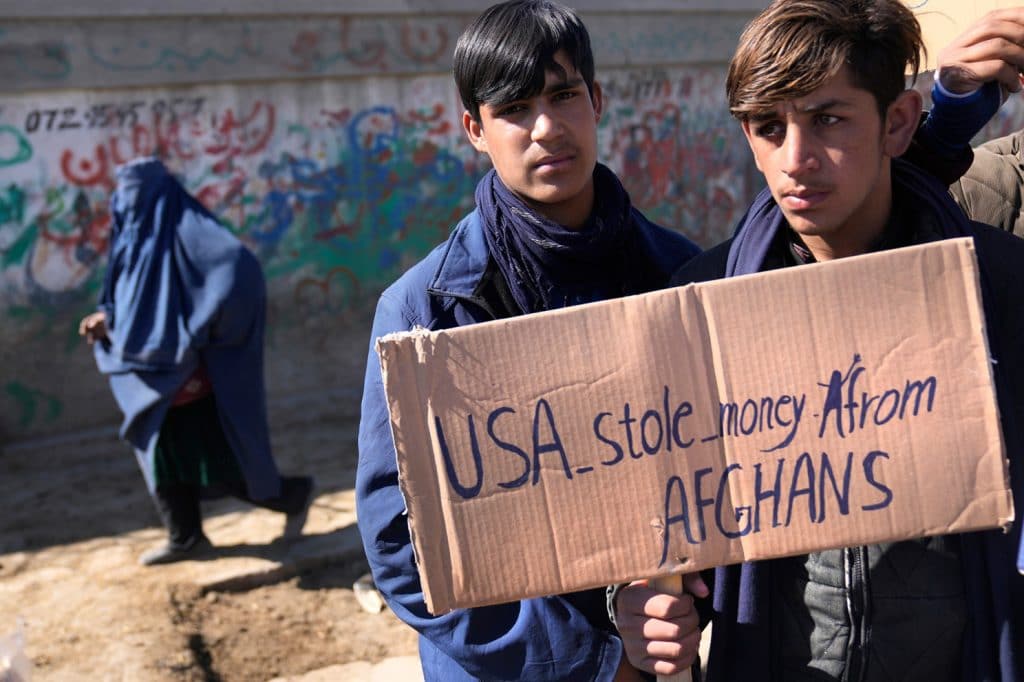 On Friday, February 11, the Biden administration signed an executive order that began a process to seize more than $7 billion in assets that Afghanistan’s Central Bank has on deposit at the Federal Reserve Bank of New York. Officially, the administration “will seek to facilitate access” of the money “for the benefit of the Afghan people” and the other half “pending a judicial decision.” Specifically, that other half is about legal claims against the Taliban for the September 11, 2001, attacks against the United States, and paying them to families of victims once those are settled.

That money — which does not belong to the U.S. government — has been frozen since the Taliban regained control of Afghanistan late last year. The Biden administration has decided to seize it to pay for “humanitarian assistance” it will, allegedly, direct toward Afghans in some manner, and outright steal the rest.

This money belongs to Afghans who had nothing to do with the September 11 attacks. The $7 billion, reports the New York Times, include “the savings of ordinary Afghan people.” It’s being stolen to punish the Taliban, which no one voted into power in Afghanistan, and to punish an entire country for attacks when none of the hijackers on 9/11 even came from Afghanistan. In an opinion piece yesterday published in the Guardian on February 16, noted author and professor of English at Brooklyn College Moustafa Bayoumi calls it “nothing less than larceny as collective punishment.”

We have a different name for it: imperialism.

The United States itself is directly responsible for the wholesale slaughter of Afghan civilians over the two decades it waged a war in the country. And yet the U.S. government, rather than compensate in a systematic way any of the families of these victims (sure, U.S. forces make measly “condolence payments” from time to time to cover their most egregious acts), will instead commit theft in broad daylight.

The half for “humanitarian assistance” will go into a trust fund rather than dealing with the immediate crisis in Afghanistan, in which “more than half of the country’s nearly 40 million people [face] acute hunger and a million children [are] at risk of dying amid a harsh winter.”

Last October, Frontline reported on how frozen assets affect people in the country. There are “huge ramifications for everyday Afghans, for normal Afghans who are not political in any sense, in trying to go about their lives,” said Ibraheem Bahiss, who works with the International Crisis Group NGO. He described them as “trying to sell household commodities to find any type of money to put food on the table.”

The situation is bleak, the Frontline report revealed. The International Rescue Committee (IRC) “couldn’t figure out how to get cash to pay its employees” — described as “people that have decent jobs” Vicki Aken, the IRC country director, added, “So, you can only imagine, for the 90% of the population that was living on less than $2 a day, how they were getting any money at all to buy food.”

In September, “the World Food Program conducted surveys showing that only 5% of Afghan families have adequate food every day and that, for the first time, people living in urban areas are experiencing food insecurity on par with rural areas.” The severe challenges extend to running hospitals, buying fuel for generators, and so on.

John Sifton, Asia Advocacy Director for Human Rights Watch, said “commandeering sovereign wealth” in this way would “do little to address underlying factors driving Afghanistan’s massive humanitarian crisis” and that even with a trust fund, “current restrictions on Afghanistan’s banking sector make it virtually impossible to send or spend the money inside the country.”

In other words, the entire “humanitarian” effort is a sham. “The Taliban are cruel, brutal, and misogynist,” Sifton added, “but why should the Afghan people be punished for that?”

The United States has a long, sordid history of freezing the assets of other countries that are deposited in U.S. banks. In 1975, just after Saigon fell to the North Vietnamese and Vietcong forces, it froze South Vietnamese assets. In 1988, just before a U.S. military intervention, the government froze Panama’s assets. In 1990, as “coalition” forces invaded Kuwait, Iraq’s assets were frozen. European countries have done the same. It is but one aspect of the theft that is at the heart of imperialism.

Looting the wealth of other nations — be it actual money, natural resources, human labor, or all three — is what built the imperialist powerhouses of today. The United States proper was built on land stolen from the natives and worked through the labor of enslaved people. In addition, it has pillaged the world’s resources, stealing minerals and foodstuffs from Latin America (think: “banana republics”) and much of the rest of the world. After stealing Cuba’s sugar crop and turning the island into a playground for American tourists, the United States responded to a revolution to overthrow its puppet dictator and win independence by imposing a criminal economic blockade that has nearly starved an entire population for better than 60 years. Today, Britain — through its companies — controls many of Africa’s key mineral resources, including platinum, copper, diamonds, gold, oil, gas, and coal. It’s been called the “new colonialism.”

The open theft of Afghanistan’s money is more of the same. It is another blow — by U.S. imperialism — after more than 20 years of drone attacks that kill civilian families celebrating weddings, imprisonment and torture of non-combatants in U.S. military prison, and other war crimes.

Bayoumi calls the Biden executive order a move that “will ultimately pauperize the nation even more, push it further into becoming a territory almost entirely dependent on foreign largesse.” In other words, imperialism being imperialism — a word that never appears in his piece, or in any of the hand-wringing statements from politicians seeking to distance themselves from Biden’s decision.

U.S. capitalism thrives on the rapacious theft of the world’s resources from our planet’s most vulnerable and marginalized people. Right now, all eyes are on Afghanistan, but this is a situation faced everywhere. Imperialism and its brutality will end only when we put an end to the exploitation that fuels profit — and that is a fight for the world’s working class.