President Biden has proposed $715 billion for the Department of Defense in 2022, maintaining its funding at Trump-era levels. The U.S. capitalist economy cannot survive without a huge engine for death, and no amount of progressive legislative pressure can change that. 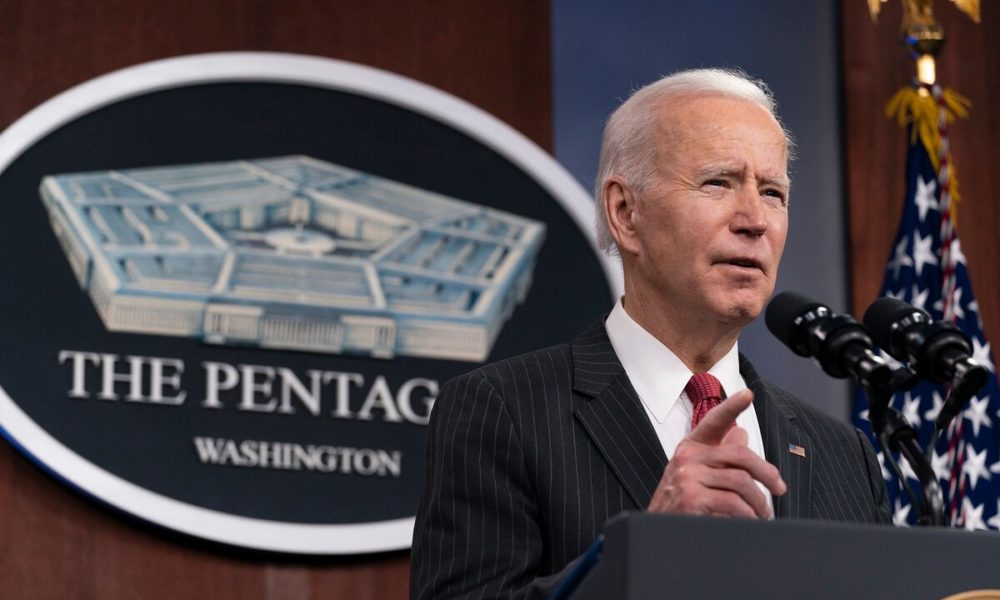 Last week, the Biden administration released its “skinny budget” plan for 2022; the full budget proposal will be released in May or June. The budget includes a whopping $715 billion for the Department of Defense, along with another $38 billion for other national security costs (the bulk of which will go to the Department of Energy, which maintains the United States’ nuclear arsenal). This is a 1.6 percent increase compared to last year’s budget, but comes out to about the same amount when adjusting for inflation.

Biden’s proposed investment in the Pentagon is receiving criticism from both Republicans and more progressive Democrats. Republicans insist that military spending ought to be significantly increased to ensure that the United States can maintain its competitive edge over China. Progressives want Biden to return military spending to levels on par with spending under Obama. However, even when adjusting for inflation, according to several different metrics, military spending during the Obama administration was the highest it has ever been since World War 2, including during the height of the Cold War.

Left Voice is hosting a panel with a Bessemer Amazon worker and Robin D.G. Kelly, author of Hammer and Hoe, to discuss the results of the unionization vote. Sign up and RSVP to the Facebook event.

The White House is spinning the budget to paint Biden as the progressive savior that voters were hoping for. This chart from the White House website shows the relative increase in different areas of the budget — 40 percent more for education, and only 1.6 percent more for defense. But this hides the absolute numbers and makes it look like Biden is investing enormous amounts in education, health care, and the environment. But the numbers show that this is all relative: the Pentagon’s budget is still seven times that of the Department of Education, even with Biden’s boost in education spending.

There’s also a second important spin at play: comparisons to Biden’s proposed infrastructure plan. The infrastructure spending is valued at $2.3 trillion, and many are praising the president for investing such a large sum in long-needed improvements. But there are two problems. First, that impressive amount will be spread out across eight years. So, the annual amount of proposed infrastructure spending comes out to only $287.5 billion — less than half of the spending allocated for defense. Second, the Biden administration has already stated that this plan is a “starting point” for negotiations with the Republicans. The version of the plan that is eventually passed — if any version is eventually passed — will undoubtedly be much less.

In 2020, Representative Barbara Lee and 15 other original cosponsors introduced legislation to cut the defense budget by $300 billion — almost 50 percent. Even though President Biden is responding to certain progressive demands, such as proposing an infrastructure bill and extending the boost to unemployment insurance by several months, he has shown no interest in decreasing military spending. Why? Clifford G. Conner explains in The Tragedy of American Science:

War spending is not primary for war but to prevent economic gridlock, and socially beneficial spending cannot do that. To think runaway military budgets can be curbed by replacing war-hawk politicians with progressives who will vote for a “more reasonable balance” between military and social spending is to miss the point. If weaponized Keynesianism accurately describes the real nature of the American economy, the only remedy for its incurable addiction to military spending … would require replacing economic institutions that base production decisions on maximizing the private wealth of the few with new ones that maximize the well-being of the many.

In other words, it’s impossible to stop enormous military spending — and again, even one dollar toward imperialism is one dollar too many — without dismantling capitalism entirely.

Keynesianism is an economic theory which posits that market crashes in capitalism are typically caused by insufficient aggregate demand. The way to respond to and avoid these crashes is to create demand through not only large amounts, but ever-increasingly large amounts of government spending. This can take the form of things like the Covid-era stimulus plans, which averted a much deeper crisis than we are currently facing by increasing people’s income through stimulus checks and unemployment insurance.

You might be interested in: Biden’s Stimulus: A Real Anti-Poverty Bill or Just Capitalism Trying to Hold On?

However, in “weaponized Keynesianism,” aggregate demand is created by the government itself demanding goods and services that it then self-funds — primarily through the military, which accounts for nearly half of all discretionary spending. This is “fake demand,” in that hyper-advanced planes and missiles are not necessary for social functioning. By creating new “needs,” military spending allows for capital to expand, which is necessary for profit.

Conner also notes that the Pentagon budget alone does not account for all military spending in the United States each year. It also includes money for the Department of Energy, which manages the nuclear program, the portion of interest on the national debt that has accrued from past wars, the Department of Veterans Affairs, the State Department, the Department of Homeland Security, NASA, and other agencies that are closely tied to national security. His calculations amount to $1.24 trillion per year, or $40,000 per second, on wars from the past (debt), present (operating expenses), and future (research).

An absolutely enormous amount of money circulating in the U.S. economy is dependent on the size and activities of the military. The weapons industry alone is estimated to account for 13 percent of all manufacturing jobs in the United States — and that’s not including the manufacturing of other materials needed by the military, such as clothes, food, furniture, medical supplies, and more. There’s also the non-military support structure that surrounds every military base: restaurants, entertainment venues, schools, stores, and more that support the people who live and work there.

To cut back military spending in any meaningful way without also changing the underlying nature of society would throw the economy into chaos. Millions would be unemployed, with limited space to go, since the market needs that kept them employed were never real in the first place. Conner explains:

Despite empirical evidence that government spending on “health care, education, clean energy, and infrastructure creates more jobs, dollar for dollar, than military spending,” it does not lead to a net increase in employment. That is because using government money to construct schools, pay teachers, and build housing, highways, and bridges competes with private capital, which puts downward pressure on the number of jobs in the private sector and the purchasing power they represent.

If government funding is used to create too many useful products, then prices — and profits — will plummet due to oversupply. While the government could employ people to do a wide variety of activities that don’t impact supply, military spending has the advantage of always having an ideological justification. Capitalist politicians will often oppose deficit spending to aid the poor, but Republicans and Democrats alike will never refuse a cent to “support our troops” — even though the money goes to weapons manufacturers. This creates a near-limitless hole into which government money can be poured, avoiding the problem of insufficient demand, while curtailing avenues of criticism. “What about the terrorists?” they ask as they invest more into drones. “We can’t let China overtake us,” they add as they invest more into missiles and air defense systems. Indeed, outpacing China is identified as “the top challenge” in Biden’s proposed budget.

Biden’s budget proposal for the Pentagon is egregious, but in his defense (pun intended), he really has no choice. The very structure of U.S. capitalism relies on immense military spending that cannot be significantly reduced without crashing the entire system. The answer is not to elect more anti-war progressives (who will vote for the war budgets anyway), but to organize for a different economic system that will not need such budgets: socialism. We support all demands to cut the military budget, but our demand as socialists is “not one man and not one penny.”