Biden’s “Summit for Democracy”: A Geopolitical Maneuver by U.S. Imperialism

The United States summoned its main allies to a virtual “summit” to discuss authoritarianism, corruption, and human rights. It’s all a cynical geopolitical maneuver aimed at two important U.S. competitors: China and Russia. 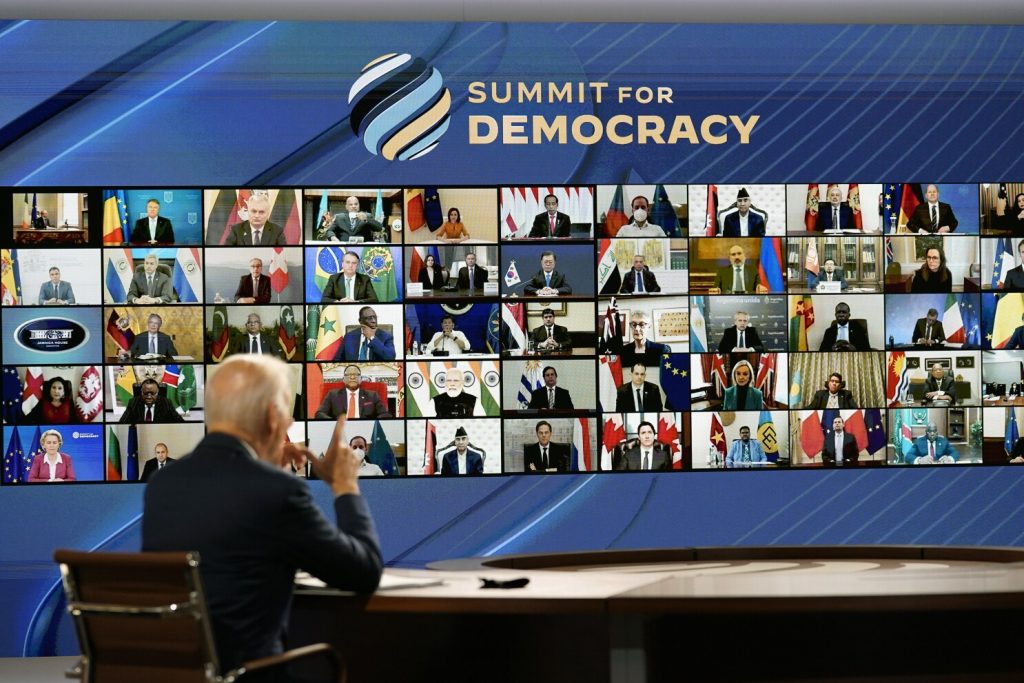 U.S. president Joe Biden invited leaders from 110 countries to a virtual “Summit for Democracy” on December 9 and 10. Who was excluded from the list of invitees is as important as those included. While the main U.S. allies were all summoned, the guest list must be seen in the context of strategic competition between the United States and China.

The summit is discussing three main global problems spelled out by the United States: “authoritarianism,” “corruption,” and “human rights.” The United States believes it has the moral authority to judge the rest of the world on these basic concepts. Further, the U.S. government has reserved for itself the decision regarding which countries are (or are not) up to the task of defending the Western values of “democracy, liberty, and fraternity” — values that, in the end, the capitalist class uses for its own interests.

Everyone knows that the United States is the world’s main promoter (and guarantor) of military dictatorships, of the proliferation of sectarian wars (as in Afghanistan, Iraq, and Syria), and of inequality and global poverty through the exportation of its capitalist model.

What is the backdrop for this summit? Governments across the globe have been using the Covid-19 pandemic as an excuse to slash or manipulate democratic rights while maintaining patents on the vaccines needed to confront the pandemic. In other words, this happens just as the civil rights of millions have been assaulted while hunger and misery grow, all at the cost of defending the profits of Big Pharma.

Since he was sworn in as president, Biden has focused his international policy on the fight between “democracies” and “autocracies” — the latter embodied, from his perspective, by China and Russia. The “Democracy Summit” is a priority he raised on the campaign trail. It takes place amidst a growing confrontation with China, which has made great strides around the world as it builds alliances that encroach on key areas of U.S. and European influence. But the confrontation with Russia is also key. Biden has been looking for ways to disrupt possible rapprochement between the European Union and Russia — particularly by Germany (in particular because of its dependence on natural gas from Russia) — along different fault lines, notably war in Ukraine and the refugee crisis.

The exclusion of China but an invitation to Taiwan, which Beijing considers as one of its provinces, sparked Chinese indignation. “We firmly oppose” the invitation, said Zhu Fenglian, a spokesperson for China’s Taiwan Affairs Office. And China put out a white paper titled “China: Democracy That Works” that boasts of the country’s credentials as a state based on the rule of law, despite decades of evidence to the contrary, and argues that “there is no fixed model of democracy.”

Taiwan, for its part, thanked Biden for the invitation. Presidential Office spokesman Xavier Chang said the summit would allow Taiwan to “share its democratic success story.”

Among Latin American countries, the U.S. president invited Brazil, Argentina, Chile, Colombia, Ecuador, Mexico, Paraguay, Peru, and Uruguay, but excluded Bolivia, Cuba, El Salvador, Nicaragua, and Venezuela. This was done in an effort to block the alliances that might form among the post-neoliberal governments that are searching for some degree of autonomy from imperialism. Biden, though, didn’t hesitate to make sure the Latin American Right — such as Jair Bolsonaro of Brazil, Sebastián Piñera of Chile, and Iván Duque of Colombia — is at the table, even if these leaders are not exactly “democratic.” All three of them jail political prisoners and repress the youth and workers demonstrating in the streets for their rights and native peoples fighting for their lands. Biden even invited Juan Guaidó, the ultra-liberal opponent of Nicolás Maduro in Venezuela, as part of his maneuvering in the region.

From the Middle East — a region dominated by absolute monarchies such as Saudi Arabia, a staunch U.S. ally, and other non-democratic regimes — only Israel and Iraq were invited. What these two countries have in common are tensions with Iran. Israel cannot be considered a democracy; it’s an ethnocracy that maintains a brutal policy of apartheid against the occupied Palestinians. But Israel also has an ongoing confrontation with Iran. Iraq, for its part, has a regime that has been under the tutelage of the United States ever since the 2003 invasion. It has had an internal dispute raging in recent years resulting from influence Iran has managed to achieve inside the country, so its participation in the summit is a message to the Iranians — who have recently joined the Shanghai Cooperation Organisation led by China and Russia.

Some other traditional allies of the United States in the region, including Egypt and Turkey (which is a member of NATO), were not invited.

Among European countries, Poland is represented, despite ongoing tensions with the European Union of EU membership statutes regarding the rule of law, as well as Polish xenophobia and attacks on women and LGTBQ+ people. Hungary, led by the far-right Prime Minister Viktor Orbán, was not on the State Department’s list of invitees. While Hungary’s exclusion makes sense, it is notable that the country is a member of NATO and the EU, has an EU vote, and meets its financial and legal commitments to the alliance. Therefore, as El Pais reports, Charles Michel, president of the European Council, and Ursula von der Leyen, president of the European Commission, will have their hands tied when it comes to offering any binding commitments, and their interventions will have to be limited to the principles foreseen in the treaty that establishes the EU’s foreign policy.

The African countries of Democratic Republic of Congo, Kenya, South Africa, Nigeria, and Niger were invited. India is also included, despite its ongoing attacks on the Muslim community and ethnic cleansing in Kashmir.

As the organizers have stated, the summit was called because of the numerous setbacks suffered in recent months in the countries where the U.S. has high hopes of democracy taking hold. Of course, they mean limited capitalist democracy.

These include Sudan and Myanmar (formerly Burma), where there have been military coups; Ethiopia, caught in a conflict that risks “imploding” into a full-scale civil war and inter-ethnic conflicts that many analysts predict could approach the terrible genocide in Rwanda; as well as Afghanistan, where the Taliban took power after the United States left the country after 20 years of supposed democratization efforts.

It is interesting to note that according to a recent report by the Stockholm-based International Institute for Democracy and Electoral Assistance (International IDEA), the United States itself joined the list of “backsliding democracies” for the first time, mainly due to a downgrading during the Trump administration.

This all seems to be posed as a way to strike some new balance of power between the United States and its main competitors, and to impose an institutional framework that allows the empire to lead the world again by establishing poles: the “good guys” and the “bad guys.” But the line is quite blurred, and it all could backfire on Biden in an environment where China is rising and several countries — Pakistan, India, and Hungary, to name a few — do not share American values. In the background is the struggle over who sets the rules of the game in the world arena, where the working class and the world’s poor must intervene in their own interests, independently of any of these sides.

First published in Spanish on December 9 in La Izquierda Diario.