This past February 21st, Evo Morales, who has served as the Bolivian president since 2006, lost a national referendum which would have allowed him a fourth consecutive term. Morales had sought to change the Bolivian constitution in order to stand for re-election in the 2020 elections, opening the possibility for him to be president for 18 years in a row. 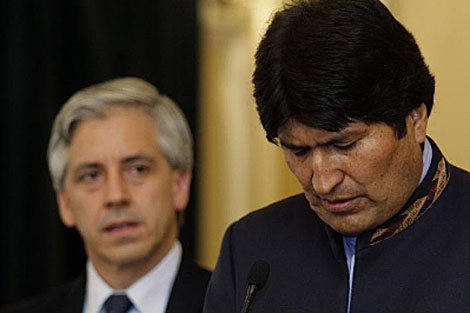 Evo Morales’ defeat in last month’s referendum was a huge blow to both him and his party, the MAS (Movimiento al Socialismo or Movement Toward Socialism). In 2014, Morales won the presidential elections with a comfortable 60% but now, two years later lost the referendum with 52% of the vote against him.

Finding a successor to Morales won’t be easy with internal factions inside the MAS fighting for power and divisions among his supporters outside government.

Although he still enjoys significant popular support, his power to confront the economic crisis at hand and arbitrate the social and political tensions within Bolivian society has become seriously compromised.

The Rise of Evo Morales

Morales’ popularity rose during the Gas War of 2003, when thousands of people took the streets in protest against the privatization of the nation’s natural gas reserves by then-president Gonzalo “Goni” Sanchez de Lozada. At least 60 people died during several days of brutal government repression and Morales was able to occupy a visible space as the head of the opposition to the old caste of traditional politicians, who were mostly white and wealthy and disconnected from the masses of indigenous people, mestizos, workers and the poor.

Evo Morales won the general elections for first time in 2005 with 54% of the vote, giving him an absolute majority. He became the emblem of hope and expectations for the majority of the country who had suffered centuries oppression and racism. Large sectors of workers in the cities, as well as campesinos and indigenous people, saw Morales as one of their own.

During Morales’ first two terms, Bolivia enjoyed a growing economy thanks to international commodity prices and revenue from utility companies that his government had renegotiated royalty agreements with or nationalized. The new revenue allowed his administration to improve social programs, give bonuses to families and women, and increase the access to clean water in rural areas. He also had support from regional allies such as Venezuela and Cuba, who sent literacy teams and doctors and provided educational scholarships. Indigenous peoples who had long been ignored and oppressed saw for first time their languages included as officially recognized in the constitution.
At the same time, the enormous gap between haves and have nots in Bolivia persisted. Large estates were untouched by Morales’ government and remained in the hands of ultra-rich landowners. The majority of multinational corporations continued to profit from the exploitation of Bolivian workers and natural resources just as they had before. And while official statistics showed extreme poverty declining moderately, most Bolivians remain poor; 64% of the country today lives below the poverty line.

The government either ignored labor conflicts or sent the police to repress the protests, such as in the Huanuni mine in May 2013 when 10 miners were shot and injured and 100 were arrested.

His image as a champion of the indigenous peoples and native cultures is corroding too. His government has turned its back on the indigenous communities that oppose the construction of a new highway through the Isiboro-Sécure Indigenous Territory and National Park (TIPNIS), prioritizing projects and policies that benefit the local and foreign bourgeoisie against the wellbeing of local communities and the environment in the heart of the Bolivian Amazon.

What is behind the “NO” vote?

The opposition grouped behind the “NO” campaign included both neo-liberal, right wing figures like Santa Cruz’s governor Ruben Costas and the businessman Samuel Doria Medina as well as certain sectors of the left such as the POR (Partido Obrero Revolucionario or Revolutionary Workers Party). But to understand the vote for the NO, we need to take into account the frustration among workers and the lower-middle class both with the economy and Morales’ undemocratic governing style.

The vote against Morales reflects not so much an organized and powerful opposition but rather the disappointment, mainly in the city, of people who unhappy with the government’s policies and repressive style but who can’t get behind the right wing either.

The Bolivian economy has suffered a downturn due to lower prices of the country’s main exports such as natural gas and soybeans. Historically the economy has depended on commodity exports and that dependency makes it extremely sensitive to the world economic crisis.

Morales deepened his bonapartist role as the economy declined, and his reactions to popular demands became harsher, using state repression when labor conflicts led by independent union activists and the left escaped his control.

Another factor in the slipping popularity of Morales is the crisis which unfolded just days before the referendum by two major events. The first was an accusation of corruption by the press again Morales’ former romantic partner, a case which implicated a number of members of the government. Then came the death of six people in an intentional fire set at the El Alto local government building.

These scandals came after allegations of rape carried out by members of the MAS, including one case caught on camera, in which a MAS lawmaker raped an unconscious woman in one of the rooms of parliament . In this environment of sexual violence, Morales himself has made sexist and homophobic comments such as calling a female minister a “lesbian” because he saw her talking to another woman in public or [declaring that eating chicken causes homosexuality ->
http://www.theguardian.com/news/blog/2010/apr/22/chicken-causes-homosexuality-evo-morales
]. But even more important is the fact that his government has maintained the patriarchal and backwards legal framework to perpetuate women’s oppression and discrimination against LGBT people.

For instance, neither Morales nor the MAS have not done anything to grant women access to free, safe and legal abortions. The wealthy or middle classes can access a relatively safe, though illegal, abortion. However, the great majority of women cannot and put their their lives at risk seeking abortions in the hundreds of dangerous clandestine clinics. The MAS claims that there is a legal path to accessing abortions in certain cases but the process is so bureaucratic that only a few women have ever managed to get official approval.

Opportunities and obstacles for the working class and the left

South America is now seeing a resurgence of the right, due mainly to the disappointment in the post-neoliberal “progressive” governments that have held power in the last decade. Bolivia is not immune to this phenomenon. Like in Argentina or Venezuela, Bolivians fought in the streets and paid with their lives to achieve change. The post-neoliberal governments that took power in the wake of these uprisings gave in to some demands, but always stopped short of profound changes. What they were able to accomplish was largely due to a decade of a growing economies. Now that the economic situation has changed, broken promises and even open repression against workers has opened the door to an opposition on the right, which though still fragmented and weak, is starting to gain momentum. Taking advantage of this scenario, Ruben Costas has announced his candidacy for the presidency already.

The undemocratic nature of the referendum offered the masses two false alternatives, from two different sectors of the bourgeoisie with their own interests. A victory for the YES vote, would have legitimized Morales’ antidemocratic turn. The triumph of the NO however, has only benefited the right. The left must not only point out this trap to the people but it also must present an alternative. This is why the LOR-CI has correctly called to cast null or blank votes and invited workers, students and the left to build an independent organization—a Workers Party—and develop a program in which the bosses, not the people, pay for the crisis at hand, indigenous peoples enjoy real self-determination, national industry is developed to satisfy the people’s needs, and the environment is protected from greed and destruction.

The slowed economy, the corruption, the unkept promises, and the cooptation of the unions, are all contributing to people’s growing rejection of the MAS. In this context, it will be much harder for Morales to continue his role as the arbitrator between bosses and workers, between the Bolivian people and foreign multinationals. Large sectors of his former supporters are unhappy with his increasingly authoritarian style, but now more than ever, he must prove to the bourgeoise his ability to control popular movements. That is why losing the referendum is such a blow for him.

Finding a replacement inside the MAS won’t be easy. His party is ruled with the same lack of democracy that his government has exhibited and the actors below Morales have not achieved anywhere near his level of popularity. Some possible options are to the head of the lower house of the legislature, Gabriela Montaño, the Foreign Minister of Bolivia, David Choquehuanca, or the current Vice President Alvaro Garcia Linera, although the latter is seen with reservations by the people and is viewed as closer to the middle class.

In this new political landscape where the opposition on the right will try to take advantage of the current situation and may have a chance of winning the next elections, there are also new opportunities for the radical left to connect with workers and build a revolutionary alternative.