Tens of thousands of workers at grocery stores in Southern California have voted to authorize walkouts if their demands for higher wages are not met. 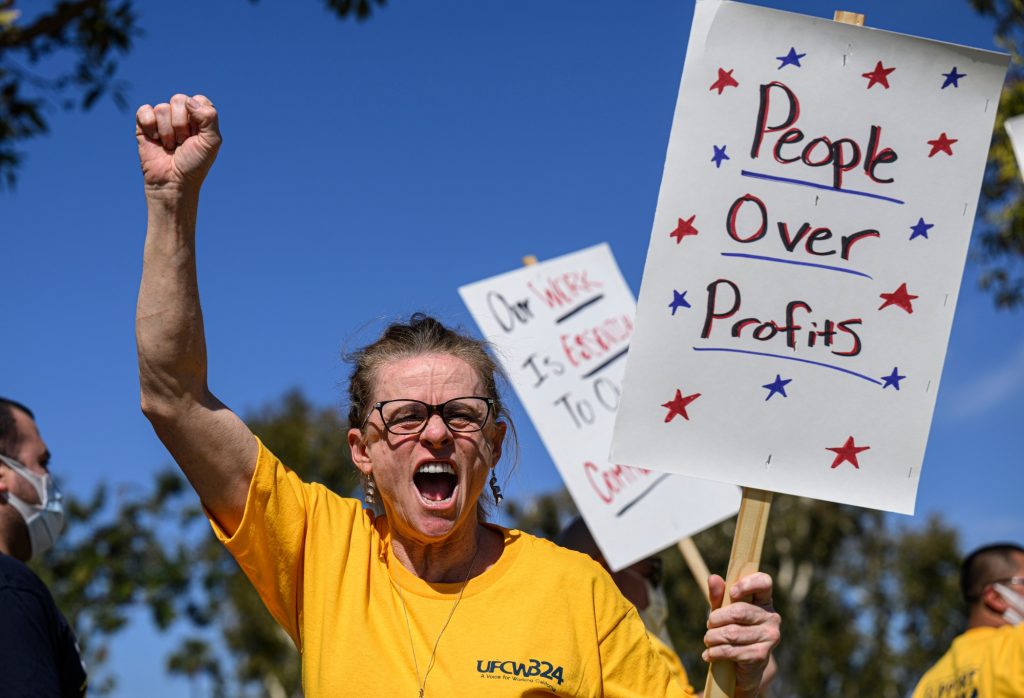 Over 47,000 grocery store workers in Southern California have voted to authorize walkouts after contract negotiations have stalled. Despite reaping huge profits during the pandemic, the supermarket executives are refusing to meet workers’ demands for increased wages, higher minimum hours for part-time workers, and health and safety committees at stores.

A strike would include workers at over 500 Krogers, Ralphs, Albertsons, Vons, and Pavilions supermarkets. These workers currently make between $17.02 and $22.50 an hour after five to seven years, less than the living wage for the area, which MIT researchers estimated at  between $19 to $34 an hour.

These workers have seen rising costs of living and inflation eat into their wages. They have also been battered by the pandemic: tens of thousands of workers with the United Food and Commercial Workers (UFCW) union have been infected, and nearly 500 have died. Once considered “essential,” these workers are now being left behind by grocers who are squeezing them for bigger profits.

As a result, the UFCW is demanding wage increases of between $5 and $8 over three years depending on workers’ positions. The supermarket executives’ offer had amounted to an annual increase of just $0.60 — basically a pay cut when factoring in inflation. Deanda Knowles, a cashier at Ralphs, said, “We’re asking for better wages. Inflation going up, gas is six, seven dollars. Bringing 60 cents to the table is disrespectful.”

The supermarkets have used union-busting and intimidation tactics, leading workers to file claims with the National Labor Relations Board. Executives have also claimed that these wage increases would force them to raise prices, harming consumers. Ralphs’s corporate affairs director John Votava said that customers would face “$400 more in monthly grocery bills … [and] push customers to nonunion competitors who do not respect collective bargaining.”

Corporations like Kroger are attempting to pass the cost  of inflation onto consumers while their profits are skyrocketing. Between 2019 and 2021, Kroger’s profits nearly doubled and reached $4.3 billion. The company also paid out $1.3 billion to investors in 2020, and CEO Rodney McMullen’s compensation that year exceeded $22 million. Frontline workers, meanwhile, saw their $2/hour hazard bonus cut. Kroger and other supermarket chains can afford to pay their workers a living wage, but instead choose to fill bosses’ coffers.

The UFCW strike authorization comes amid increasing unionization efforts across the country, most notably  at Starbucks. Support for unions in the U.S. is also at its highest since 1965, at over 65 percent. It comes after Striketober and the current Minneapolis and Sacramento teachers’ strikes that highlight the need for workers to fight and strike against their bosses.

The rank and file have spoken, workers are ready to strike.

Grocery store workers are essential, and they should use their immense power to unite and confront their bosses and the system which works to extract profits at every turn.