Deadly tornadoes ripped through the southern and midwestern United States on Friday. Reports since reveal that Kentucky candle factory bosses threatened to fire workers if they stopped to take shelter prior to their shifts ending. Under capitalism, candles are even more important than human lives. 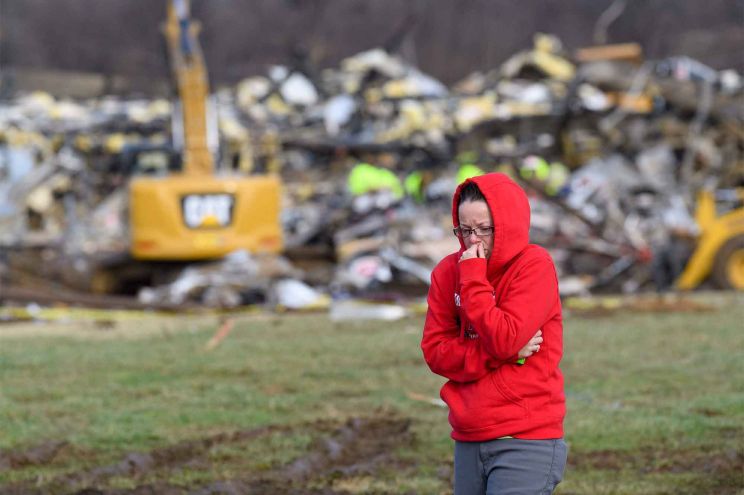 As the death toll from the deadly tornadoes that ripped through the southern and midwestern United States last Friday continues to rise, horrifying new details have come to light regarding just how little bosses care about the wellbeing of workers. At an Amazon warehouse in Illinois, worker Larry Virden texted his girlfriend, saying “Amazon won’t let us leave.” He was killed by the tornado and by a company that has always put profit over the safety of its workers. Virden leaves behind four children.

Examples are not limited to big, bad Amazon. Take Mayfield Consumer Products in Kentucky, a now-destroyed candle factory in Mayfield, Kentucky. As NBC News reports, “At least five workers said supervisors warned employees that they would be fired if they left their shifts early.” And further, “For hours, as word of the coming storm spread, as many as 15 workers beseeched managers to let them take shelter at their own homes, only to have their requests rebuffed, the workers said.”

As reported by one forklift operator at the factory, “That’s the thing. We should have been able to leave … The first warning came and they just had us go in the hallway. After the warning, they had us go back to work. They never offered us to go home.”

According to CNN, the “factory had been ‘going 24/7’” to meet the holiday demand for candles. In the aftermath of the tornado’s destruction, the factory’s labor practices — including using incarcerated workers from a local jail to help with the Christmas rush — have come under greater scrutiny. As the storm approached, pumping out candles and pouring money into capitalist pockets outweighed worker safety — with bosses threatening workers to keep them producing.

Let’s make this very clear: Workers were forced to continue working even as tornado sirens were blaring. They were threatened with losing their jobs if they left their shifts early. Could there be a more glaring example of how workers — and even workers’ lives — are expendable under capitalism?

No matter job, owners and management pretend they are workers’ friends. It’s all part of their manipulation and control. They’ll pretend they’re “looking out” for worker “partners” with bullshit rhetoric like “we are all one family” or “we’re all on the same team” type rhetoric, but it’s really just about the bottom line. Workers under capitalism are expendable, and the bosses and management are not “friends.” They are enemies of the working class who literally threaten our lives.

What else could it mean when we see the Mayfield example? Candles for sale are more important than human lives.

Going to work should never be a death sentence, but as the capitalism-induced climate crisis progresses, it is becoming clearer than ever: the capitalists will never hesitate to sacrifice workers in pursuit of profits. In instances like at Mayfield Consumer Products, the bosses are responsible for those killed. Workers should demand compensation for families, along with a full investigation into the bosses’ actions — with trials and punishment for company leaders for their criminal negligence.

Workers’ lives matter;  the profits of the bosses — who won’t keep us safe — do not. The capitalists have never concerned themselves with workers’ lives except to make sure we can come back to work the next day, and they never will.

It’s time to fight for better workplace conditions, with worker-led health and safety commissions in every workplace empowered to shut them down whenever conditions are deemed unsafe. We workers must be the ones with the power to ensure our safety. If it’s left up to the bosses, more of us will die.