Trump has been silent about the large number of racist and anti-Semitic hate crimes that have taken place since he took office. In a rambling and barely-coherent statement following the clashes in Charlottesville, Trump neglected to mention the murder of Heather Heyer. He condemned the violence on “many sides” and refused to condemn the white supremacists and fascists specifically. 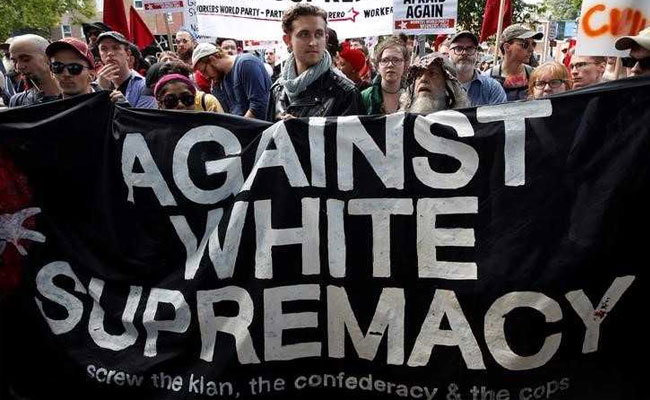 This article was originally published in the Socialist Action Website

Heather, who worked as a paralegal in Charlottesville, Va., went to the protest to demonstrate her love of humanity and her opposition to the racist and fascist thugs that the decaying capitalist system has spewed forth. Her apparent murderer, James Alex Fields Jr., 20, escaped from the scene but was apprehended shortly afterwards. One of his high school instructors in Ohio told ABC News that Fields was “infatuated by the Nazis and Adolph Hitler.”

The call for an ultra-right rally in Charlottesville was intended to bring together “alt-right,” neo-Nazi, neo-Confederate, and Ku Klux Klan groups in an action to defend the statue of Robert E. Lee, the general who led the slaveholders’ army during the Civil War of the 1860s. The Charlottesville city council had voted to remove the monument from its site at the former Lee Park—now renamed Emancipation Park. The rally was reported to be the largest gathering of far-right and racist groups in at least a decade.

In an Aug. 11 torchlight march across the University of Virginia campus, the white supremacists and fascists chanted: “white lives matter,” “you will not replace us,” “Jews will not replace us,” and “blood and soil.” Rightists attacked a smaller group of counter-protesters, using sticks and brass knuckles, while police stood by and watched.

On Saturday, Aug. 12, as the fascists gathered for their rally, the counter-protesters outnumbered them two to one. As clashes broke out, the authorities declared a state of emergency and cops ordered the gathering to disperse. Scuffles between fascists and counter-demonstrators continued, injuring at least 15 protesters.

Later, the counter-demonstrators began a march through downtown, chanting “Whose streets? Our streets!” Without warning, Fields drove his car into a column of marchers, killing Heyer and injuring at least 19 others. Among the injured were members of the International Socialist Organization (ISO), the Democratic Socialists of America (DSA), and the IWW.

Trump ran for president on a reactionary populist appeal to people with economic and falsely perceived racial grievances. During his rise to the White House, he scapegoated immigrants and Muslims while gathering support from overt fascists like David Duke and alt-right founder Richard Spencer, as well as the Ku Klux Klan. Trump supporters physically attacked protesters at campaign rallies as the candidate encouraged their violence.

While Trump is not a fascist, he has surrounded himself with alt-right spokesmen like Steve Bannon and Stephen Miller (a college friend of Richard Spencer). His election and rhetoric has emboldened the fascist and racist far right. These groups have grown and mobilized since the election, taking Trump’s rise to power as a signal to come out of the shadows. The Nazi Daily Stormer wrote that Trump “is setting us free.”

Trump has been silent about the large number of racist and anti-Semitic hate crimes that have taken place since he took office. In a rambling and barely-coherent statement following the clashes in Charlottesville, Trump neglected to mention the murder of Heather Heyer. He condemned the violence on “many sides” and refused to condemn the white supremacists and fascists specifically.

David Duke, apparently irritated by Trump’s mild rebuke, tweeted, “I would recommend you take a good look in the mirror & remember it was White Americans who put you in the presidency, not radical leftists.”

But other rightists took Trump’s statement as a victory. “Did Trump just denounce anti-fa?” tweeted Richard Spencer, using a term used to describe anti-fascist protesters. And the Nazi Daily Stormer wrote gleefully that Trump had “outright refused to disavow” the fascists. “He didn’t attack us. … When asked to condemn, he just walked out of the room. Really, really good.”

Fascism and how to fight it

Fascism is a symptom of capitalism in its terminal decay. The tactics of fascists were described by Malik Miah in the August 1975 International Socialist Review (“Free Speech and the Fight Against the Ultra-Right”):

“Fascists try to turn the anger of all those threatened with ruin by the capitalist crisis against the oppressed racial minorities and organized labor. In this country, the approach of fascist organizations in the l930s and l940s was to claim to be the representatives of the ‘little man’ against both the big capitalists and the ‘communists,’ directing their fire especially at Blacks, Jews and ‘big labor.’ In his book ‘Fascism and Big Business,’ Daniel Guerin points out that ‘fascism’s game is to call itself anti-capitalist without seriously attacking capitalism.’”

Having masked their intent under anti-capitalist rhetoric, the Nazis quickly subordinated all of German society to the needs of the capitalist class. We can’t rely on cops, courts, and capitalist politicians to protect us from fascist goons. Cops often ally themselves directly with the fascists.

Socialists reject the notion that small groups engaging in street fighting can defeat the fascists. We seek to mobilize the largest possible counter-mobilizations of workers and the oppressed against these thugs. We need to build united-front mass-action coalitions that include the trade unions and organizations of oppressed nationalities, women, students and LGBTQI people.

At the same time, we support the right to organized self-defense against racist and fascist attacks. We take to heart the IWW slogan, “an injury to one is an injury to all.”