Determined to ignore the dangers of the ongoing Covid-19 crisis and force people to return to in-person work, NYC Mayor Bill de Blasio refuses to offer any remote option for children and parents who continue to fear for their health. This all but ensures a surge in the spread of new contagious and vaccine-resistant variants of the virus when the school year begins on Monday. 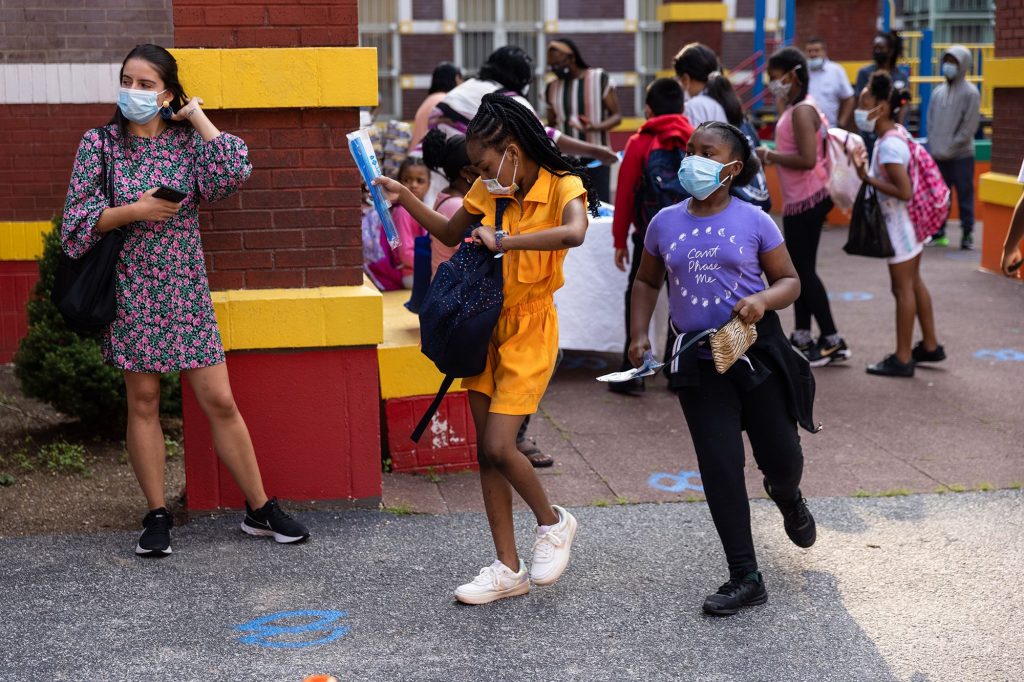 On Monday, September 13, more than 1.1 million public school students will return to in-person learning in New York City. Given the lack of safety measures in place, a new peak in virus transmission and a resulting increase in long-term health conditions for our city’s children are all but certain.

Despite the much-touted increase to both state and federal funding for education, Covid-19 prevention measures are not high on the city’s list of priorities. This is compounded by the refusal to address the need for lower class sizes as capitalist politicians continue to warehouse children in packed classrooms.

This is not accidental; it illustrates the intentions of those who control funding for public schools. Rather than fostering critical thinking, the state uses schools mainly for childcare so that their parents can work, as well as to train kids in easily-measurable skills that are useful to the job market. While politicians insist that keeping schools open during Covid is about child development, the state’s true priorities are to get parents back to making money for their bosses and to convince people that the crisis is over, even as the delta variant continues to infect thousands of people in the city every day.

Just in time for the new school year, the United States is experiencing the second largest peak in Covid-19 daily cases since the arrival of the virus. New York City is at its third largest peak — the number of cases here is the highest it has been since April of this year.

Federal, state, and municipal governments insist that the vaccination of adults and children over 12 will be sufficient to wipe out the virus.They are fed up with interruptions to capitalist normality, and the sooner they can force people back to work while loosening safety measures, the sooner they can justify an end to the already meager stimulus checks and eviction moratoriums on offer. These transparent lies about vaccinations — claiming they alone can end the pandemic — show their complete disregard for the effects of the continued spread and the rising death toll.

Although deaths from Covid-19 have decreased since winter, the U.S. is currently experiencing almost exactly the same number of deaths as this time last year. The delta variant of the virus, which is twice as contagious as the original, accounts for nearly all current Covid cases, and it is especially dangerous to children — NPR has reported that “more children are being hospitalized with the coronavirus than at any point during the pandemic.” Although some of this is because children under 12 cannot be vaccinated yet, the effect is the same. And while pediatric hospital wards are filled to capacity with more than half of the kids in the ICU on ventilators, hospitalization is not the only effect on children that their parents need to fear.

“Long Covid” is a not yet fully understood — and deliberately ignored — effect of Covid-19. The term describes a series of health conditions that remain after recovering from the virus, some of them apparently permanent. In early August, the New York Times reported on  a UK study, which found that “9.8 percent of 2-to-11-year-olds and 13 percent of 12-to-16-year-olds infected with the coronavirus reported continuing symptoms five weeks later. After 12 weeks, rates remained significant: 7.4 percent in the younger group and 8.2 percent in the older group.” The effects of long Covid include “fatigue, headaches, brain fog, memory and concentration difficulties, sleep disturbances, ongoing change in smell and taste.”

These dangerous effects are never even referred to in city announcements, much less addressed or considered in plans for schools. That’s because, while the city purports to be centering the needs of students and parents, the need to rejuvenate the economy completely trumps public safety concerns.

The spread of the delta variant demands an increase in safety measures. The Department of Education (DOE), however, is determined to actually decrease safety measures such as social distancing, testing, and quarantining with breathtaking recklessness.

Even though class sizes — and class size limits — in New York City and other cities like Los Angeles remain alarmingly high, pandemic-related social distancing requirements have relaxed considerably. Federal guidelines adopted by New York State require three feet of social distancing in schools “whenever possible,” but as Chalkbeat reveals, with classes holding as many as 50 students, this will not be possible in the majority of schools. This means that there is no enforceable social distancing requirement, as opposed to last year, when a strict 6-foot distance was to be maintained between all students.

During the 2020-2021 school year, NYC public schools tested 20 percent of students and staff weekly, but the upcoming school year will see only 10 percent tested twice a month. Additionally, while parents’ consent to random testing was a requirement for in-person learning last year, consent is now entirely optional. These new rules will prevent schools from detecting cases, allowing heightened community spread in a city in which only 60 percent of residents are vaccinated.

Ensuring proper ventilation is one of the most important methods used to lower the spread of airborne diseases, but the DOE is still neglecting it. Gothamist revealed that over 1,500 New York City public school classrooms still don’t have sufficient  ventilation for students to return in person. Meanwhile, the city bragged about purchasing two air purifiers for every classroom to mitigate the virus’s aerosol transmission, paying $43 million to a private distributor. However, these units are not HEPA compliant, making them all but useless to curb the aerosol transmission.

You might be interested in: As the School Year Begins, America’s Children Are the Sacrificial Lambs of “Return to Normal”

This disregard for safety guarantees an increase in the spread of an already rampant variant of the virus. As The Atlantic describes it, “The alarming rise of pediatric cases seems to reflect the grimness of infectious arithmetic: More kids are falling ill because more children are being infected; more children are being infected because this virus has seeped so thoroughly into the communities most vulnerable to it.” Keeping unvaccinated children in close proximity and poorly ventilated spaces with little testing will make children vectors for the virus, allowing an increase in spread and breakthrough infections among the vaccinated.

Given these lax safety measures and the rise of the delta variant, parent organizations have been demanding a remote option. At the end of May, de Blasio announced his refusal to allow a remote learning option for the 2021-2022 school year, even for students with heightened medical risk of both short and long-term effects of Covid-19. And even as safety measures have become looser and looser, he has continued to stubbornly insist on forcing students back to packed classrooms.

When capitalists disregard the health and lives of those who keep society running, unions should be fighting for the safety of workers and their children. However, the bureaucracy in charge of the United Federation of Teachers is ignoring this responsibility and is not demanding a fight for safe conditions. Union leadership has actually negotiated a longer school day for teachers, agreeing to a new office hours requirement without any consultation with the rank and file or a vote of any kind.

While the UFT bureaucracy bobs and weaves to avoid addressing any of its members’ demands, parent groups like the Bronx Parent Leaders Advocacy Group continue to petition the mayor for a remote option for students. But their call has not received open support from any part of the UFT. Even the left caucus of the city teacher’s union, the Movement of Rank and File Educators (MORE) hasn’t officially endorsed it or even included it on its website, nor has it put out a call for a fight against the lack of safety.

With various organizations shying away from a fight, and without enough force behind these demands, it seems almost certain there will be no remote option for students offered by the city. As educators and caretakers of children, it is our responsibility — and that of our union — to demand that the DOE provide a safe learning environment for our students. In the meantime, it remains to be seen if parents will comply and send their children into the unsafe learning environments provided by a government that, at every level, remains determined to return to the capitalist “new normal” at the cost of public health and children’s lives.