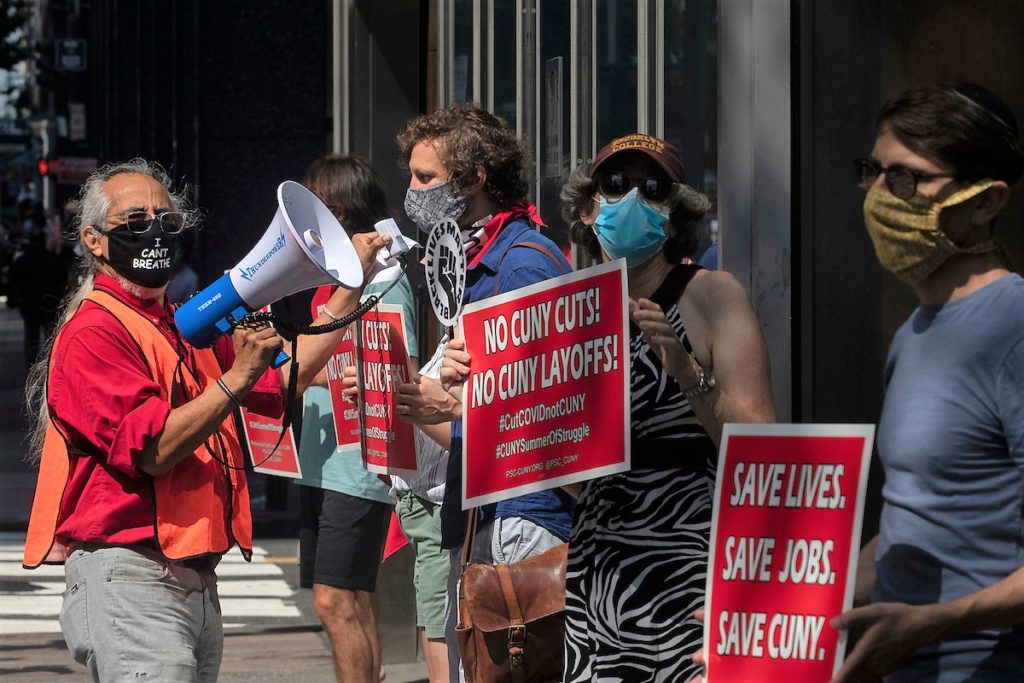 On June 30, the City University of New York (CUNY) revealed that it is laying off more than 2,800 part-time adjunct faculty and staff across the university’s several campuses. This massive wave of layoffs amounts to more than 10% of the entire membership of the Professional Staff Congress Union (PSC CUNY) — which represents most faculty and staff at CUNY — and more than 20% of the adjunct faculty and staff at the university. In addition to these layoffs, hundreds of adjunct workers will lose their health insurance due to reduced workloads, leaving them without coverage in the middle of a global pandemic.

Such extraordinary layoffs have not been seen at CUNY since the New York City fiscal crisis of the 1970s, when as many as 6,000 positions were eliminated and faculty were furloughed for two weeks. However, although dire, the fiscal situation currently facing CUNY is nothing like the 1970s. While the university claims the layoffs are due to expected lower enrollments and budget cuts due to the Coronavirus outbreak, there is little evidence so far that enrollments will be down and, with the exception of a $20 million reduction in city funding (less than a quarter of one percent of the city’s total contributions to CUNY), projected cuts to the CUNY budget have not materialized. In this regard, CUNY’s decision should be seen for what it is: a callous attempt to use the crisis to offset recent contract gains and to force its already overworked employees to do more with less, laying the ground for future cuts and retrenchment.

In response the PSC CUNY has filed a lawsuit claiming that the layoffs are a violation of the Coronavirus Aid, Relief and Economic Security Act (CARES). The lawsuit explains that CUNY has already received $251 million in aid, half of which, according to the rules of the CARES Act, is supposed to be used for students and the other half to offset costs associated with the pandemic, including payroll. The PSC is arguing that, since this latter amount of funds was supposed to be used to prioritize protecting jobs, the university is in violation of the rules of the CARES act. While the university has already begun distributing funds to students in need, it has not yet decided how to spend the remaining $125 million, an amount that could easily pay an entire year’s wages for the 2,800 workers who have been let go with plenty left over for other initiatives related to the pandemic.

A Lawsuit is Not Enough

While the union’s lawsuit is a good and necessary response to the layoffs, the PSC CUNY leadership has unfortunately developed no plan for how to proceed in the interim or for what to do if they lose the lawsuit. This failure to prepare the groundwork for a real struggle to protect these jobs reveals the fundamental weakness of the PSC CUNY leadership’s bureaucratic approach to this crisis. The union, after all, has known for many weeks that these layoffs were on the horizon, but rather than directly confront the university by building the real organizing power needed to respond as a collective body, the union has instead agreed to postponement after postponement of the appointment decision deadline for these jobs in hopes that they could negotiate fewer layoffs while preparing the lawsuit. This has left the union unorganized and unprepared to respond to these layoffs in any meaningful way.

As the time for winning back these jobs slips by, the union leadership is doing little, beyond writing strongly worded letters, to actually mobilize, much less organize their membership to stop these layoffs. Indeed, the lawsuit seems almost designed to postpone the struggle to some future point well beyond the coming semester. Such an approach offers no immediate solutions for those who have lost their jobs, and does nothing to address the increased class sizes, reduction in course offerings, and increased workload that these lost jobs will lead to.

As one rank and file adjunct activist, Rebecca Smart, put it: “Adjuncts who have not been reappointed need jobs now. The lawsuit just feels like the lobbying strategy of the PSC. It makes good headlines, but doesn’t actually end up producing results.”

Indeed, it is clear that the only way to defeat these layoffs is for the union to immediately begin preparing for the credible threat of a strike in the fall; however, the New Caucus leadership has not once led any kind of work action since it took power in 2000.

Thankfully there are thousands of rank and file members, particularly adjuncts, who feel differently and are increasingly ready to take more militant action. Just last May, more than 800 full-time and part-time CUNY faculty signed a letter committing to a strategy to withhold their spring grades to protect jobs. And now, union members organizing under the banner Rank and File Action (RAFA) are pressing the union to call a strike authorization vote before the fall semester begins.

Such a strike could, if successful, not only force the university to rehire the 2,800 workers who were laid off, but could revitalize the New York public labor movement. For decades, public sector labor unions in New York State have seen their power drastically limited thanks to the anti-union Taylor Law, which prohibits public sector unions from going on strike or from engaging in any kind of work actions. The only way to defeat such a law, however, is to break it, and a strike at CUNY could very well embolden other public sector unions — many of which could be facing impending layoffs or furloughs — to take similar actions.

Petition to the PSC Leadership for Strike Preparation

As part of the effort to build a strike at CUNY, RAFA has drafted a petition to the PSC CUNY leadership, already signed by hundreds of union members, calling on them to “prepare a strike to restore the jobs of all laid-off CUNY employees,” and to “hold a member-wide strike authorization vote immediately.”

RAFA has also prepared a solidarity petition for students and non PSC-CUNY members to sign, which already has more than 500 signatures.

Below we reprint the entire text of the petition to the PSC leadership.

The coronavirus pandemic and protests against racist police killings have pulled back the curtain on the gross disparities that characterize our society. Recently announced CUNY cuts exacerbate these inequalities in New York City. Despite receiving over a quarter of a billion dollars of bailout money from the federal government via the CARES Act, CUNY’s administration has just laid off 2,800 adjunct instructors and staff, representing roughly 20% of its adjuncts and 10% of the total PSC bargaining unit. These workers join the growing ranks of the unemployed in the worst job market in living memory. Many of them have lost access to health insurance in the midst of a global pandemic. Those fortunate enough to keep their CUNY jobs will continue to work in a gutted institution, asked to do more with less as they wonder if they will be next on the chopping block.

Although city and state officials claim the current cuts are a response to the fiscal shortfall caused by the slowdown of economic activity during the pandemic, we know that the neoliberal restructuring of CUNY was underway well before COVID-19 hit. Decades of cuts have left CUNY underfunded and increasingly reliant upon rising tuition from overstretched students to fund itself. Instead of defunding the police or taxing wealth, policymakers have chosen to slash the services the people rely on, including CUNY.

To survive and thrive, we must refuse to subordinate the necessities of life, including quality public higher education, to austerity politics. For too long, CUNY educators and staff have been cowed by the Taylor Law, which penalizes public sector employees for striking. We cannot let one unjust law stop us from using our power for the public good. As the recent teachers’ strike wave and the months-long protest movement against police violence have shown, collective action is the only way forward. To achieve this at CUNY, we will need to mobilize every member, organize strike committees at the campus level, and build ties with students, community organizations, and other labor unions in the city.

We, the undersigned members of the Professional Staff Congress, therefore call on our leadership to prepare for a strike to restore the jobs of all laid-off CUNY employees, to radically improve our collective working conditions, and to fully fund a free CUNY. We demand that the union hold a member-wide strike authorization vote immediately. In signing this letter, we commit to voting to authorize a strike, and to taking part in a job action if such an action is called.

(NOTE: Signatories’ names will be kept confidential to avoid retaliation against precarious workers.)

Non-PSC members can sign an open letter in solidarity with this demand.