The Unite the Right was going to get private subway cars. Thanks to subway workers, they won’t. 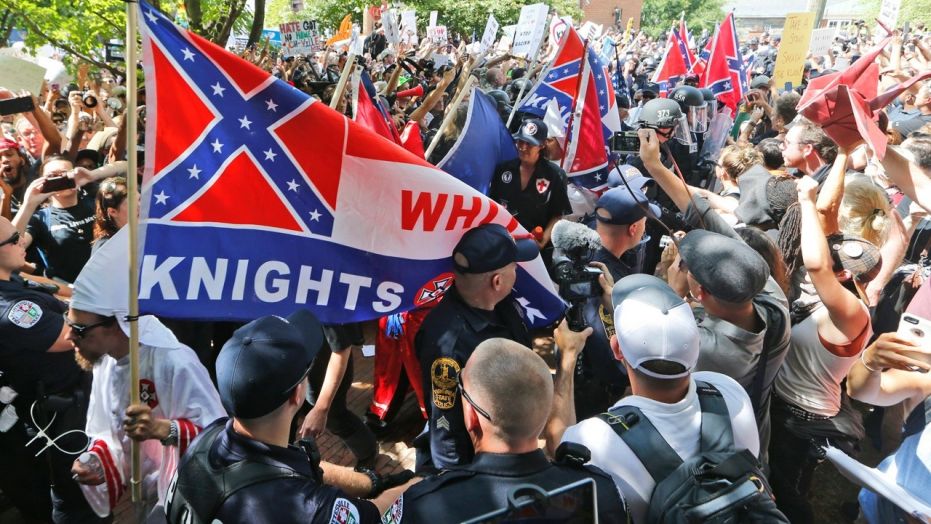 This July 8, 2017 photo shows members of the KKK escorted by police past a large group of protesters during a KKK rally in Charlottesville, Va. (AP)

Amalgamated Transit Union (ATU) Local 689 were informed two weeks ago to prepare for the arrival of a Ku Klux Klan-affiliated white nationalist group, who would be given three train cars of their very own and a police escort. The local responded with disgust and with action.

Union president Jackie Jeter released this statement, when the news hit the press: “Local 689 is proud to provide transit to everyone for the many events we have in D.C. including the March of Life, the Women’s March and Black Lives Matters. We draw the line at giving special accommodation to hate groups and hate speech.” The local then voted to give Jeter discretionary power to declare a strike. They will not be complicit.

Tensions had been rising between the union and the city. The contract for Local 689 expired two years ago, and its 8,000 members had been working without a renewed contract since. Then the Metro moved hundreds of custodians who worked in bus garages and railyards into the stations, a move that totally disregarded seniority. On July 12th, the DC Metropolitan Area was delayed during the morning rush as bus drivers and other transport workers performed a “late out,” clocking in a few hours late to protest the city’s refusal to negotiate their contract. Workers also refused overtime assignments, continuing an action that carried over from a work slowdown on July 4th. In response to this, the city suspended all those who reported late to work on July 12th, as part of collective labor action. Some members were given discipline forms that stated, “You failed to report as scheduled as part of concerted collective job action”–blaming the issues solely on the workers and particularly their union, rather than their refusal to guarantee any sort of stability.

The Metro’s privileging of an outright hate group was the final straw.

Jeter, speaking on behalf of her union, declared, “Considering that the courts granted Metro the ability to deny ads on buses and trains that are ‘issue-oriented,’ we find it hypocritical for General Manager Paul Wiedefeld] to make these unprecedented special accommodations for a hate group.” Not only is it hypocritical, it is dangerous and blatantly racist, considering that [over 80% of the union are people of color. General Manager Paul Wiedefeld’s reasoning that giving the white nationalists their own train and police escort would keep others safe–at the expense of the workers. The workers voted to authorize a strike.

In response to this, on Sunday Metro Board chairman Jack Evans announced that the Metro would no longer offer three separate train cars to the white nationalists–like the rest of the city, they would have to make their way to their destination in their own way. The workers won, as one of the most militant locals on the East Coast. Evans clarified that “The Metro is] a public transportation organization. [We are open for whoever wants to get on and ride Metro.” What is unspoken is, of course, this: the Metro is open–as long as the workers of ATU Local 689 sign off on it.