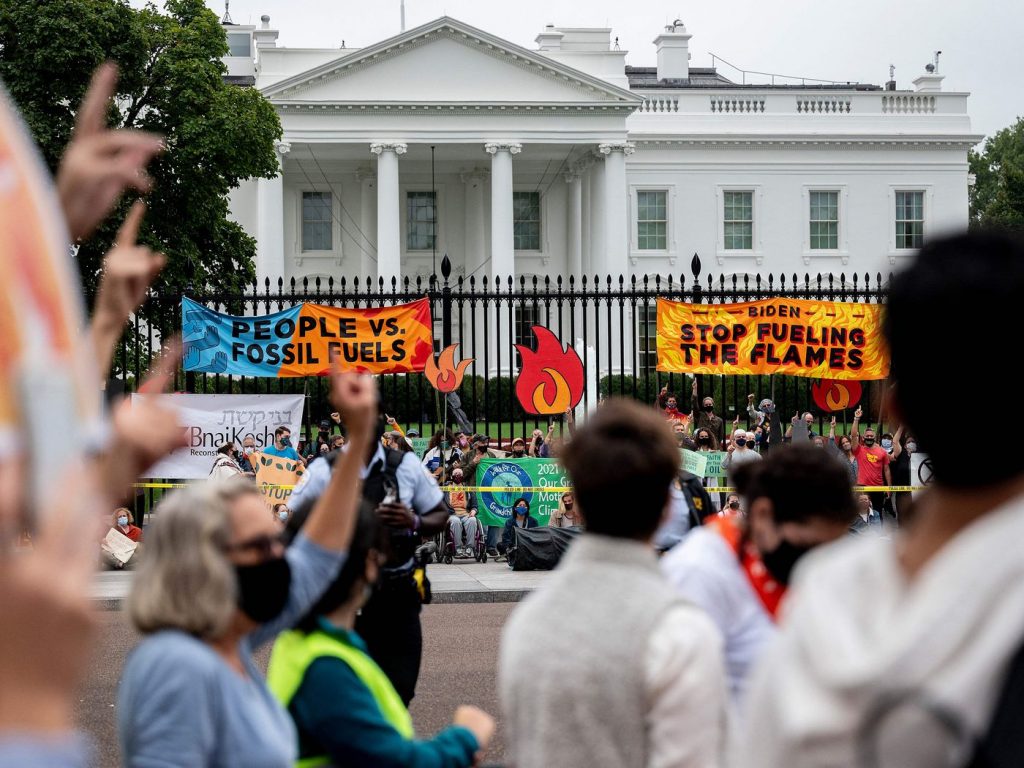 After an embarrassing past few months which included the overturning of Roe v. Wade, rising inflation, a stalled legislative agenda, and Nancy Pelosi’s ill-advised visit to Taiwan, Biden and the Democratic leadership were desperate for a victory. A small win for the party has arrived in the form of the so-called Inflation Reduction Act (IRA), approved by Congress on Friday and soon to be signed into law by Biden. Two years of inaction on carbon emissions — and increasingly devastating extreme weather events, like flooding in Kentucky and droughts in the western U.S. — also amped up the pressure to pass climate legislation.

The “climate conscious” establishment — the corporate-owned liberal media outlets, the environmental nonprofits, the think tanks, and Democratic politicians — have generally hailed the agreement as a saving grace. The liberal economist Paul Krugman’s recent New York Times op-Ed is bombastically titled  “Did the Democrats Just Save Civilization?” The response to the bill has been more muted among climate activists, but many on the reformist Left have accepted it as a step forward despite its problems.  As Jacobin’s Branco Marcetic put it “The Biden-Manchin Climate Bill isn’t very good, but it’s all we’ve got.”

But what if “all we’ve got” keeps us on a trajectory above 2°C warming, a scenario that puts the homes of tens of millions in coastal cities around the world underwater, makes large sections of the Earth uninhabitable, and fuels more numerous and more deadly fires, storms, and droughts? And what if, at the same time, “all we’ve got” keeps billions flowing annually into the coffers of the same fossil fuel companies and auto manufacturers that created this disaster? What relief should we feel then?

The deal is emblematic of the Democratic Party’s strategy: a few token concessions to the multi-racial and working-class party base, and massive giveaways to the true directors of the party, big business and Wall Street. Although the bill stimulates the development of some renewables, the IRA actually promotes the expansion of fossil fuel extraction, tying any funding for non-fossil energy projects on federal lands to leases for new oil and gas projects.

Of course, the Democratic Party could never be expected to deliver a bill that would truly put the needs of the planet and its people first. That objective would necessarily contradict capitalist logic, which rests on minimal business regulations, low corporate taxes, and low wages. Party leaders will try to pass this bill off as a win for business, climate, and working people. But the real benefits are heavily weighted on the corporate end of the scale, the same actors most responsible for the climate emergency itself.

What’s in the Bill and What’s Not

The more than 700-page IRA includes provisions related to climate, inflation, healthcare, and corporate taxes, among others. Democrats were initially fearful that the party’s most conservative senators, Joe Manchin and Kyrsten Sinema, would upend the bill, as the two did with Biden’s Build Back Better plan last year. But after weeks of negotiations that included further concessions to fossil fuel, pharmaceutical, and private equity companies, the bill cleared its main obstacle in the Senate.

Around half of the bill’s allocated funding, or $370 billion over 10 years, falls roughly in the category of climate measures. The majority of that is in the form of tax credits for corporations, small businesses, and consumers to incentivize “green” energy production and usage, and to implement energy efficiency in homes and businesses. The funding, while hailed as “sweeping” and “historic” by many media outlets, represents around a one-third reduction of the original Build Back Better climate funding that was spiked by Manchin last year, an amount that was already woefully inadequate.

Its measures must also be put in the context of other federal spending. The IRA’s per-year allocation represents only a small fraction — approximately 5 percent — of the annual U.S. military budget, which now stands at approximately $800 billion. The U.S. military, it should be noted, happens to be the world’s largest polluter. How can we view this legislation seriously considering that?

Furthermore, the bill contains little that can meaningfully reduce carbon emissions. It certainly won’t be enough to keep warming “well below” 2 degrees Celsius, the stated goal of the Paris Agreement, signed onto by Obama in 2015 with much fanfare. It aims for a 40 percent cut in greenhouse gas emissions by 2030 (below the 50 percent reduction agreed to in 2015.) But even this is not backed up with any enforceable measures. Instead, it’s projected to come as a result of tax breaks for companies that elect to transition away from fossil fuels. Above all, the IRA aims to incentivize corporations to take up “green” energy projects or replace their existing fossil fuel-based infrastructure. Any emissions reductions will be the result of a cost-benefit calculation for big businesses — in other words, the bill relies on the same “green capitalist” logic that has failed for decades to make a dent in global carbon emissions.

Included in the bill are billions in tax credits to adopt wind, solar, or geothermal energy, along with nuclear energy and biofuel projects. The latter two sources are not only far from sustainable methods of energy, but in the case of biofuels, a dubious alternative to fossil energy in reducing emissions. There are also tax incentives for consumers to purchase electric vehicles, to improve energy efficiency in homes, or upgrade to “greener” appliances. There is no doubt that new energy efficient technologies are needed. But tax credits for buying electric vehicles ultimately means the manufacturing of millions of new cars at a tremendous energy (and therefore carbon) cost.

Most notably, there are no provisions that curtail the extraction of fossil fuels. Neither are there any timelines imposed on utility companies or auto manufactures to transition away from fossil energy. No penalties exist for companies that maintain emissions at or above current levels. “All carrots, no sticks,” says Paul Krugman of the bill (approvingly.) If fossil fuels remain more profitable than non-fossil energy, corporations may continue burning them without any legal or financial repercussions. Given this, it is hard to comprehend how the plan will achieve its ultimate goal of reducing carbon emissions by 40 percent over the next eight years.

New Funding for Renewables, but at What Cost?

Writing in OpenDemocracy, Aaron White notes that the Manchin-Schumer bill “furthers the US’ most profligate pastimes: drilling oil and driving big cars.” Its tax credits for electric vehicles stimulates the manufacturing of millions of new cars, at an enormous energy cost, while doing nothing to build electric mass transit and reduce the country’s car dependence. Measures to attempt to reduce carbon emissions are accompanied by provisions that encourage the expansion of fossil fuel extraction. Because of this, he and other climate advocates have called it “a climate deal with the devil.”

Incredibly, the IRA stipulates that any new wind or solar projects on federal lands must be accompanied by major expansions in leases for oil and gas drilling. Since investments made by fossil fuel companies into these drilling projects must be recuperated later, fossil fuel combustion can be assumed for many years or even decades into the future. The bill also greenlights new offshore drilling in the Gulf of Mexico and in Alaskan waters.

These provisions are so egregious that the Climate Justice Alliance has determined that the bill’s negative environmental impact actually outweighs any emissions reductions it may cause. The bill also provides funding for new carbon capture facilities, a scheme that, more often than not, serves as a cover for continued coal, oil, and gas production. Nowhere are any of the more progressive elements of the Green New Deal, the supposed “framework” for Biden’s climate agenda during the 2020 elections, such as a jobs guarantee, universal healthcare, or a public works program.

Biden has made good, however, on his promise that “we’re not getting rid of fossil fuels for a long time.” The IRA fails to keep fossil fuels in the ground, and even promotes new extractive activity. It is no win for the climate nor for the majority of the earth’s people. This is the contradiction of the “green capitalism” that the Democrats aspire to. Capitalism is an inherently unsustainable and dirty system of production. While oil, gas, and even coal remain profitable commodities, there will be no meaningful cutbacks to their extraction and consumption. There are alternative solutions that can keep fossil fuels in the ground, provide universal employment, and quality healthcare for all. But they won’t come from this party, which has always put the interests of polluters before the people and the planet.