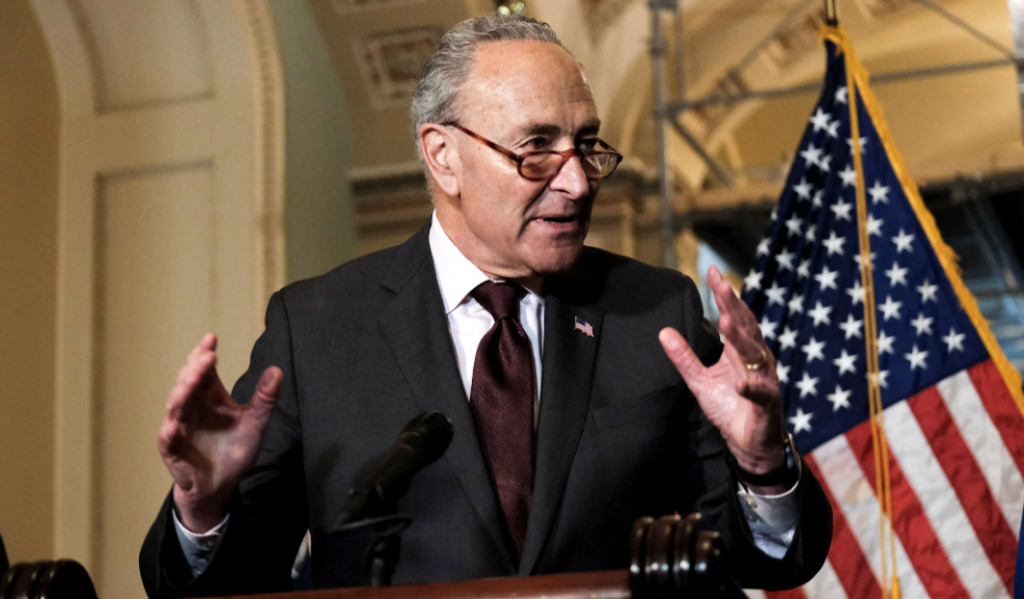 It seems like the Democrats have just noticed how important abortion access is and how endangered it is. In the aftermath of Alito’s leaked draft almost every Democrat has vowed to do something about it. Now Senate Majority leader Chuck Schumer has announced he will push a vote on the Women’s Health Protection Act on Wednesday. But everyone knows there are not enough votes to pass it. Why, then, is he calling for this vote?

“The American people will see crystal clear, that when given the chance to right this wrong, the Republican Party will either side with the extremists who want to ban abortion without exceptions, or side with women and with families and with the vast majority of Americans,” said Schumer according to The Hill. He conveniently forgot about all the past chances the Democrats had to codify Roe v. Wade and right this wrong.

Last time this happened, February 28th, the bill never even made it to the floor of the senate. Joe Manchin voted against even discussing the bill. Though the Democrats try to blame this one right-wing old white guy for all their failures to pass progressive legislation, the truth is that Diane Feinstein (California), Ben Ray-Lujan (New Mexico), and Raphael Warnock (Georgia) didn’t even vote to bring it to the floor.

And this is not their only problem, there is also another anti-abortion Democratic senator, Bob Casey, who, according to The Washington Post, is the son of “former Pennsylvania Gov. Robert P. Casey, the same Casey in the 1992 Supreme Court case Planned Parenthood of Southeastern Pennsylvania v. Casey. A speaker for the congressman said he will vote for the procedural motion.

“That’ll be a debate vote about the debate,” Casey told The Post. “And then we’ll see what happens after that.” Mr Casey’s candor is quite brutal.

This is not to mention the fact that in Texas establishment Democrats who themselves publicly call for abortion access are going all out to support one of the staunchest opponents of abortion rights in the Democratic Party, Representative Henry Cuellar, against and pro-abortion rights immigration lawyer Jessica Cisneros. Nancy Pelosi and Jim Clyburn have both openly supported Cuellar’s campaign.

Schumer paints abortion legislation as a fight against the Republicans, but the Democratic Party itself is divided on an issue most Americans support, pulled by more conservative, anti-abortion elements among their voter and donor bases.

But let’s say Schumer does get the bill to the floor; would he and the rest of the senators do what they need to do to pass the bill? That is, will they abolish the filibuster? Recent history tells us that they most likely won’t. Just think about the PRO Act, the coronavirus relief program, etc.

It seems a little bit incredible that the Democratic Party is still relying on this strategy that got them nowhere. A piece published by Politico might shed some light on the issue.

“In the top Senate battlegrounds, Democrats are buying up television time and sounding off at every opportunity about Republican plans to curtail abortion rights. They have seized on the moment — and consider it a possible turning point.”

As usual, it’s all about getting votes and doing nothing afterwards to defend abortion. Time and again Democrats have had the majority in both chambers and they didn’t protect abortion, nor have they managed to pass legislation to make healthcare accessible — not even a public option which the majority of Americans, both self-identified Democrats and Republicans, support. This is not to mention the sweeping reforms against voting rights that have been passed in several states with little to no resistance.

To paraphrase Chuck Schumer: the American people are starting to see crystal clear that voting is not the way to defend our rights. On Monday, when news of the SCOTUS decision dropped, hundreds took to the streets in Washington, D.C. The day after, thousands rallied and hundreds marched through the streets of New York with Left Voice after the NGOs and politicians that called the rally had refused to march.