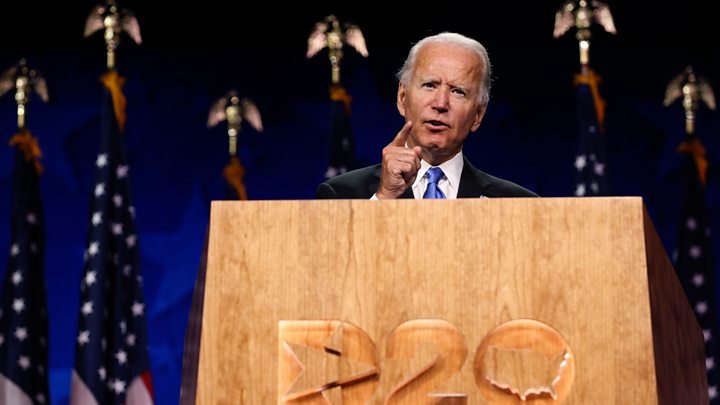 The fourth night of the Democratic National Convention was much the same as the previous three: Light on policy, heavy on rhetorical claims of “decency.” After four days of convention and hundreds of speakers, we might as well put “Not Donald Trump” on the ballot. Despite Joe Biden’s keynote address, and a lineup of speeches by major Democratic politicians, viewers would be hard-pressed to identify what exactly Biden would do as president — beyond restoring vague notions of “dignity” and “decency,” of course.

The evening was also full of the same shallow attacks on President Trump that liberals have repeated over the past four years. We heard variations on Trump not standing up to Vladimir Putin, not being able to read, and being the “Coward-in-chief.” Host Julia Louis-Dreyfus said that she was “proud to be a nasty woman,” and claimed that the president cheated at golf. Several speakers also pointed out Trump’s hypocrisy, for example his family’s use of postal voting despite his current attacks on the postal service.

Although there was a real lack of policy proposals, to some degree we did get to know Joe Biden better throughout the evening, with a central focus on Joe Biden’s personal losses and his devotion to his family. Several times, we were reminded of the tragedies that he has faced, including the death of his wife and daughter, and the 2015 passing of his son Beau. Biden’s children and grandchildren also emphasized repeatedly what a family man he is, and how devoted he is as a father and grandfather. His history of personal loss was cynically showcased to support the religious speakers’ assurances that he is “a man of faith.” This included a final prayer by a priest who spoke about protecting “the unborn child in the womb”— clear anti-choice rhetoric. Voters were told, ad nauseum, that Biden is a “decent” man, Donald Trump is not.

While the event was largely devoid of policy discussion, many speakers did address the issues facing people in the U.S., particularly as a result of the coronavirus. Wisconsin Senator Tammy Baldwin mentioned healthcare and insurance companies, and Senator Cory Booker went as far as to mention the growing wealth gap and attacks on U.S. workers. Even billionaire Michael Bloomberg pointed out high unemployment rates. The Democratic candidates who ran against Biden and spent months criticizing him appeared in a panel to heap praise on his character, including Bernie Sanders, who continued to rubber stamp his candidacy.

However, listening to them, you would be forgiven for forgetting that Biden does not, in fact, have proposals to substantively address the problems in healthcare and unemployment. He does not support Medicare for All, and he is a long-time ally of Wall Street and the health insurance industry.

The military was a recurring theme during the final evening. Senator Tammy Duckworth and  former South Bend mayor Pete Buttigieg spoke of their time serving in the military, with a heavy emphasis on what a poor commander-in-chief Trump is. Even a World War II veteran — a Republican Trump-voter, of course — appeared on the screen to criticize Trump and endorse Joe Biden. Beau Biden, Biden’s deceased son who was frequently shown during the livestream, was often pictured in military garb. At one point, we heard from a soldier and his wife about the challenges of serving in the military. In an extremely telling comment, the soldier spoke of his love of the U.S., and asked, “Are you willing to do the hard work to maintain it?” Indeed, imperialism does maintain the U.S., and Biden has always been a staunch defender of imperialism and champion of U.S. military intervention. And tonight at the DNC, he didn’t even try to hide it.

In a particularly perplexing moment, while extolling Biden’s decency, Mayor Buttigieg lamented that he would previously have been fired from the military because of his homosexuality. It’s strange that he would bring this up in a pro-Biden speech given that Biden voted in favor of Don’t Ask, Don’t Tell.

Likewise, a major theme of the evening, as in the previous evenings, was racial justice, as the Democratic Party attempts to position itself as the political representation of the Black Lives Matter movement. The event showed footage of Black Lives Matter protesters, and George Floyd, Breonna Taylor, and other victims of police brutality were mentioned. There was also a touching tribute to recently deceased politician and civil rights hero John Lewis, and Atlanta mayor Keisha Lance Bottoms even quoted Audre Lorde: “Your silence will not protect you.” There was of course no mention of Biden’s long history of racism, the violent repression of protesters occurring across the U.S., or of the repression of protests even in Atlanta.

The evening culminated in Biden’s keynote speech, which was about as memorable as the rest of the four-day event (that is to say, not at all). The primary message was that Biden would restore honor and functionality to the Presidency. He promised that, in addition to “decency” and “democracy,” “science” would return to the White House, in contrast to Trump’s pandemic response.

On the topic of the recent uprisings and John Lewis’s death, he said that he believed that America was ready to “lay down the heavy burden of hate,” arguing that this generation would “be the generation that finally wipes the stain of racism from our national character.” He returned to Trump’s statements about Charlottesville, claiming there was a “battle for the soul of the nation”.

Amid many (less convincingly delivered) Obama-esque platitudes about America not being “a collection of red states and blue states,” Biden paid lip service to the issues that other speakers had brought up — the closure of small businesses, millions losing their jobs and health insurance, and tax-dodging corporations. However, Biden has nothing to offer us for these ills. The entire DNC made it clear: the Democrats aren’t going to propose any progressive policies or major reforms for the working class and oppressed. As the institutions of the regime experience a crisis of legitimacy, the Biden campaign is sweeping in to re-legitimize them, promising a “back to normal” and claiming that the real problem is Donald Trump. But normal was the problem; it was “normal”  that created the monster that is Donald Trump. And further, for all his posturing about “decency,” Joe Biden and the Democratic Party hold up the same system as Donald Trump, standing firmly on the side of racism, imperialism, and capitalism.