Don’t Be Fooled: The Most Diverse Cabinet in History Is Pure Demagogy

Biden boasts that his new cabinet “looks like America.” However, whether the cabinet “looks like” the working class has nothing to do with their interests and politics. Make no mistake: these politicians will always put the capitalists above the workers. 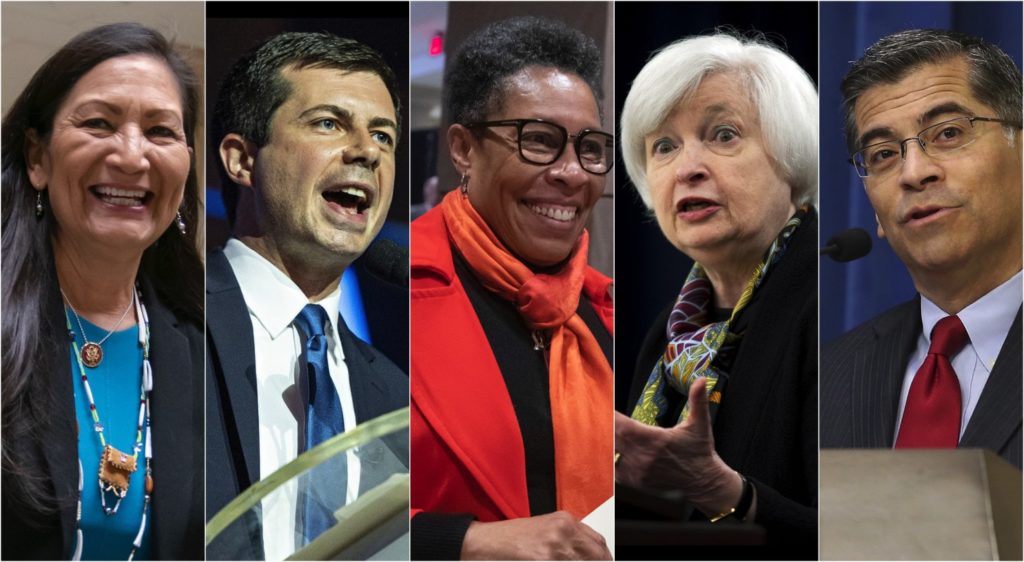 Liberals are celebrating what is shaping up to be the most diverse cabinet ever. The new president wants to use the “diversity card” to hide the fact that his cabinet will govern for the super-rich, by applying the neoliberal recipe in times of pandemic and economic crisis and by maintaining the racist character of the U.S. state.

The stimulus bill recently approved by Congress to alleviate the coronavirus crisis and its economic consequences is a taste of what the Biden administration will be like, even though it was passed under Trump. Congress has approved only $600 in direct payments and $300 extra in weekly unemployment benefits. Meanwhile, the super-rich continue to accumulate billions in profits from the pandemic. In short, with demagogy and rhetoric, Biden is preparing to impose austerity, protect police departments, and continue governing for his big campaign donors.

Of the first 18 cabinet-level appointments Biden has made, two-thirds were part of the Obama-Biden administration or closely tied to it. Biden boasts that his new cabinet “looks like America.” But whether the cabinet “looks like” the working class has nothing to do with their interests and politics. Make no mistake: these politicians will always put the bourgeoise above the workers. As President-elect Biden has assembled his cabinet choices, he is returning to a pre-Trump status quo, not ushering in a progressive transformation.

It is precisely the Obama legacy that Biden says he wants to restore, and it is precisely the Obama legacy that the Black Lives Matter movement has been challenging since 2014. The idea that electing officials of color or oppressed minorities to top positions in government will change the lives of millions of oppressed Black people, Brown people, and working people in the U.S. — this has failed to produce any results. Liberals are playing with the worn-out representational lean-in strategy that the Democratic Party has sold to the oppressed for decades.

According to this strategy, access to public office under the umbrella of the Democratic Party would be a step forward in fighting oppression and winning reforms for the oppressed. That was Barack Obama’s discourse when he won the presidency as the first Black president, but his words were negated by the emergence of the first chapter of the BLM movement in 2014. Seven years later, police departments across the country are still killing Black people as an everyday practice of these racist institutions. The representational lean-in strategy was also employed by Hillary Clinton and her attempt to break the glass ceiling for women. Clinton’s victory would not have meant much for the vast majority of working-class and oppressed women in the U.S., who are treated as pawns in election strategies. For women of color, trans women, and the working class, Clinton’s breaking of the glass ceiling would have left them cleaning up the glass.

For its part, the progressive wing of the Democratic Party strategy of pushing the party to the left, represented by Sanders, is only giving Biden space to try to impose the capitalist stability that Wall Street misses so much. To win the election with greater legitimacy among some sectors that are discontented with the Dems, Biden, a strong representative of the establishment and finance, required the support of Sanders and the Squad. In this equation, unfortunately, the message was that it is unnecessary to fight in the streets against racism or for Medicare for All, nor to break with the Dems, but to continue trusting that we can push to the left the same capitalist politicians who for 30 years have defended the neoliberal project and the racist institutions to the teeth.

The left outside the Democratic Party, like the DSA, made the grave mistake of going after the lesser evil instead of deepening discontent with the Democrats to build a truly socialist organization made up of Black, Brown, and working people who are truly organic to the working class, not only because of their origin or race but because of their class interests and program. It is impossible to defend the interests of the working class by joining or supporting one of the parties that governs for our bosses and oppressors. Race or gender can unite us with some of these politicians, but class divides us, and so we need real revolutionary politicians of the oppressed.

The most recent demonstration that the Democratic Party is the graveyard of social movements was the case of the BLM movement. What in May was a massive movement in the streets became by November a movement for passively voting, exactly as the Democratic Party wanted. This is not to say that the movement regressed only because of confidence in the lesser evil, but the Democrats made great efforts to bring the nationally expressed anger to the ballot box.

It would, however, be a mistake to focus solely on the Democratic Party’s current position of co-optation and declare that the Biden government will actually be able to impose stability. There remains a latent anger at systemic racism embodied above all in the police departments and against the super-rich and Wall Street who have benefited from the pandemic.

Biden’s decision to form a racially diverse cabinet is a response, from the capitalists’ point of view, to the force that the BLM movement once gained on the street. But precisely because of the movement’s strength in 2020, Biden’s government will be weak, and will have to govern between the pressures of the mass movement fed up with social inequality and racism on one side and its commitments to Wall Street on the other. But the “most diverse cabinet in history” is nothing but pure demagogy. It has rigorously chosen to hide behind the disguise of “representation of oppressed minorities,” a program just as racist and anti-worker as that of its Democratic predecessors.