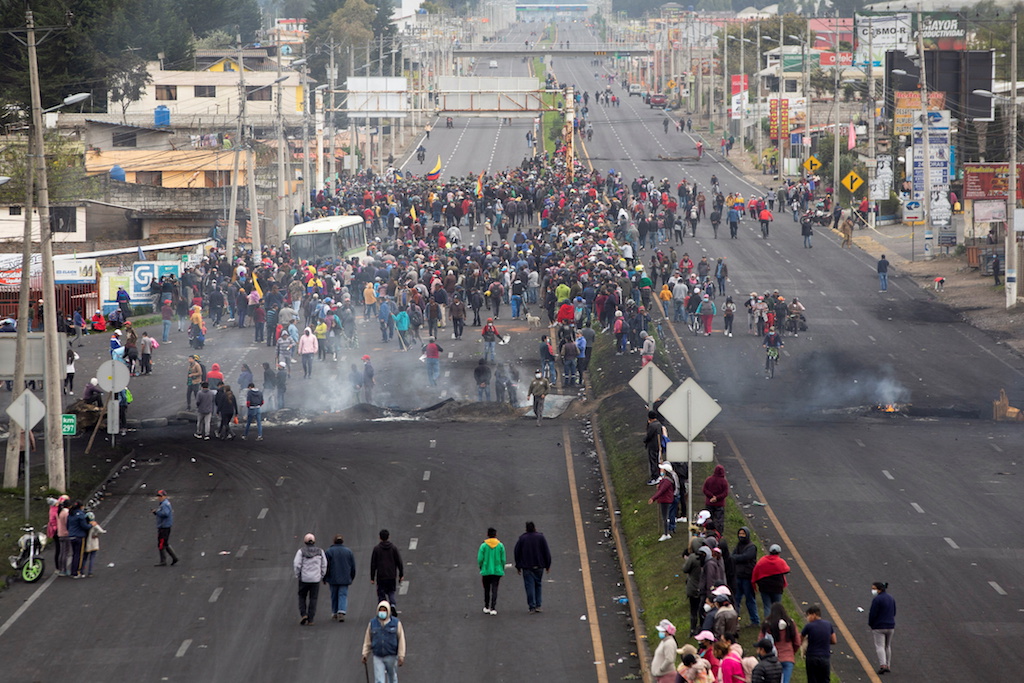 Last week, Ecuador’s indigenous movement, mainly from CONAIE (Confederation of Indigenous Nationalities of Ecuador), called for massive protests against a fuel price increase. Indigenous communities are facing the consequences of an extractivist policy that hands over their territories via mining contracts to corporations that raise fuel prices, in an oil-producing country.

For the past 10 days, all around Ecuador, streets have been barricaded, and massive protests have stopped the economy. The main roads into the capital, Quito, have been blocked off, and the country is now facing food and fuel shortages.

The protesters are demanding that President Guillermo Lasso freeze the price of gasoline, declare a moratorium on small farmers’ bank debts, reinforce labor rights to cut job insecurity, stop privatizations of the public sector, and limit oil and mining expansion into indigenous lands.

At first Lasso’s government tried to portray itself as “democratic” and to show a “willingness to listen” to popular demands. However, Lasso has not backed down, and refuses to dialogue with the protesters.

He has accused the indigenous movement of trying to destabilize the country and of committing “terrorist acts.” As a consequence, the leader Leonidas Iza was arrested and taken away in an unidentified car, and it took several hours before his transfer to another city was made public — all this in an attempt to tamp down the movement. Iza was released in the early hours of Wednesday morning, but prosecutors opened a case against him, which will go to trial on July 4.

Lasso called for a state of emergency in six provinces, including a nighttime curfew in Quito. On Sunday, police took over an indigenous cultural center in Quito to use as a base to repress the protest — a slap in the face to the indigenous protesters.

The Continuity of Lenin Moreno’s Policy and a Latent October

The unrest in Ecuador is not temporary — it confronts not only the government but also the whole political and economic power of the country. It comes after the massive uprising in October 2019, which put former president Lenin Moreno on the ropes and limited the IMF’s austerity plans. Lasso stated that he would not allow this strike to acquire the dimensions of a new social outburst, but the living conditions for the Ecuadorian people are dire and taking expression in the street.

After two years of pandemic, Moreno’s vaccination campaign was promoted as one of the “most successful” in Latin America, but deep social and economic problems lingered. The average worker in Ecuador earns a minimum wage of just $425 a month. Lasso had promised an increase of $100 to post-pandemic wages, but he failed to clarify that he would divide it in installments throughout his term, so the increase was only $25 this year.

During the pandemic, workers were subjected to a labor regime in which their rights were openly attacked. With the Humanitarian Support Law promoted by the Moreno government, employers could increase working hours, reduce salaries, stop paying pension contributions, and fire workers without any impediment. Lasso’s initiative in this matter was to make a sort of “copy-paste” of the law and adapt it to the post-pandemic world under the euphemistically named project “Creating Opportunities.” In this project, he basically proposes an alternative labor regime, where the parties in “common agreement” can modify the working conditions (as if the employer-worker relationship was one between equals).

This is how labor precariousness is disguised as “full employment,” in a country where working conditions, the attack on wages, and the loss of labor rights are central concerns of the day.

Lasso promised to transform poverty into micro-entrepreneurships, with credits, indebtedness, and the classic neoliberal appeal of individual effort, but not only does poverty remain, but Lasso’s image as the “self-made” banker was further discredited after the Pandora Papers scandal exposed his use of tax havens.

Layoffs of health workers, austerity in education, a privatization plan for energy resources, the repression of the women’s movement in the middle of 8M, the opposition to legalize abortion in cases of rape (!), the increase in the cost of living, and an enormous crisis in the prison system — where overcrowding, degrading conditions and violence have left more than 300 prisoners dead in one year — added to the emergence of groups linked to hired killings in the country’s main cities. These groups have helped the government undertake a policy of militarization, establish states of exception, and criminalize protest. They are among the reasons that Lasso’s approval rating has plummeted to only 31 percent, but this is not only a question of his government.

The rebellion of 2019 fundamentally questioned the country’s economic model; the IMF austerity could not be applied without contradictions. Despite a slowdown during the pandemic, that deep malaise remains.

UNES (Union for Hope), a bloc constituted centrally by the Democratic Center Movement and the Citizen Revolution Movement of former president Rafael Correa, presents itself as the largest opposition force. In fact, however, it guarantees Lasso’s center-right party’s governability, making alliances in the Constituent Assembly, where the government has a small minority. UNES has done nothing to confront the IMF austerity, supported by a government that promotes itself as the representative of the banking system and as continuous with Morenismo. This shows that UNES is not an alternative.

To redouble the mobilization and bring together the indigenous movement, workers’ organizations, and students, we need to organize in assemblies where we can discuss a plan of struggle to stop Lasso’s adjustment and for the immediate release of political prisoners.

Workers and popular sectors should independently organize and establish a program that unifies their demands against the IMF adjustment, the tariff hikes, labor precariousness, and extractivism. Such a program, which centrally questions the ownership of strategic resources, could fundamentally address Ecuador’s structural problems and lead to the conquest of all the popular demands.